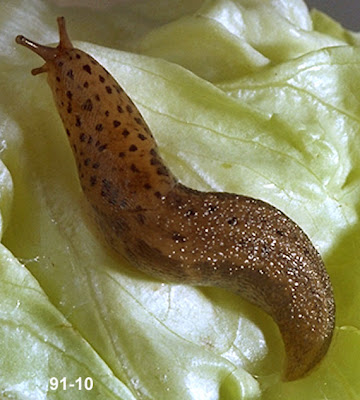 There are only two garden "bugs" that I wage war against. One is the Japanese Beetle, and the other is the Slug. I have just been on a killing rampage. There are only two easy ways to kill slugs en masse. One is to drown them in shallow trays of beer, and the other is to melt them with common table salt. I've just melted about 200 slugs and boy does that feel good!
They live in the spike holes and cracks of the rail road ties that border our driveway. They ate my dahlias until I gave up growing dahlias. Then they started on the marigolds. But tonight I got revenge. We had a short rain around dinner time, and when I went out exploring this evening I noticed the slug exodus. They were everywhere! They were heading out for dinner in groups of 6 or more. And while I have given up on dahlias, and the marigolds are safely away form the railroad ties, I was bound and determined to put a sizeable dent in what appears to be a very healthy slug breeding program.
So I went in and got a salt shaker and I salted slugs until I ran out of salt. And slugs. I melted the first batch, then I retraced my steps and melted the EMTs who were helping the ones who received only third degree burns (or eating them ~ yuck). Then I retraced my steps again and melted the mourners. One thing I noticed is that I have at least three different varieties of slugs. And I also noticed that not all of them melt into a gooey yellow mess. Some of them melt into a gooey white mess. I wonder if this is based on species or amount of salt? Someone should do a study.
Posted by SmartAlex at 5:43 PM