Gardening is beginning to wind down for me this year. Our friends who had planted potatoes and winter squash are reporting record yields. One gardener says that his wife is weighing their potatoes at a little over 4 pounds a piece! I can't wait to see one.

My artichoke has blossomed. There is only one flower on this one. There were two other chokes started on the stem, but I didn't fuss over watering it, and they dried up. It is still a garden oddity, and visitors have enjoyed seeing what an artichoke looks like in "it's natural habitat". 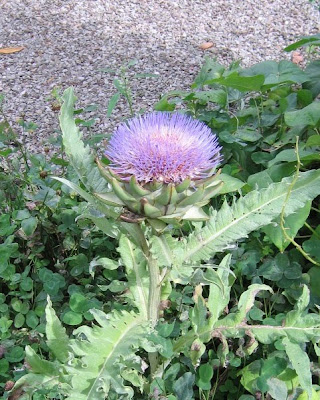 The tomatoes continue to produce, with the Black Krim being one of the steadiest throughout the season. 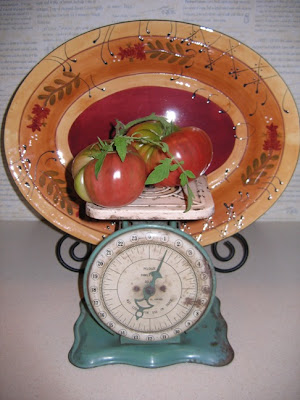 This was my first year for Dr. Wyche, and this tomato will be my standard favorite for orange fruit. I see no reason to look any further. I prefer the taste over the Kellogg's Breakfast variety I grew in 2008, and they are not as large as the Kellogg's, and more to my liking. 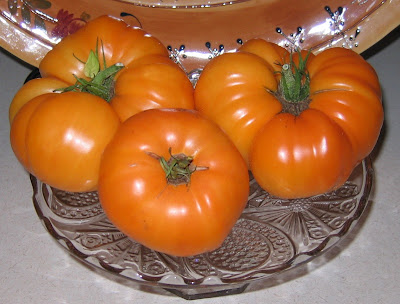 The fall planting of peas, beans and carrots is doing outstanding. The beans are flowering, and the peas already have formed pods on the Maestro vines. They've even inspired the nasturtium to rally and bloom again. My first planting of bush beans, has continued to produce steadily. The past two weeks, I have often gone out to find that all of a sudden I need to pick and freeze beans. There are a little over two dozen plants still producing, and I've left them even though they are sprawling at the foot of the sunflowers in a miserable mess. In a few days they will be done, and the new planting will be on the verge of producing. That made just about perfect timing. 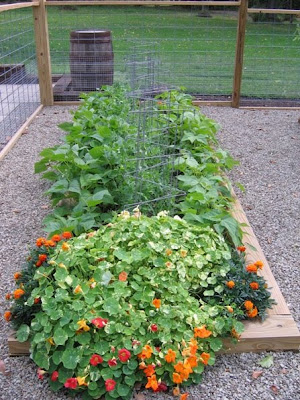 My sunflowers are over 10 feet tall. While I loved how they worked in the cucumber and bean bed, I think next year I will choose a shorter variety! I've had to go in there and lop off the spent stalks just to restore order. 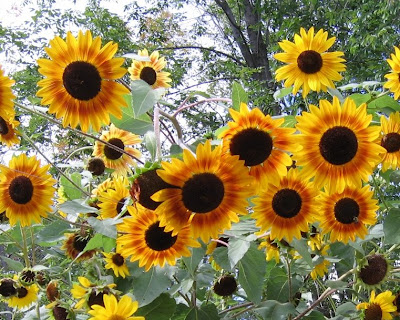 This past Labor Day weekend, I made another larger batch of the wild plum jelly. After eating it for a few days, Tim proclaimed it was a little hard to spread. I have to agree. If I were judging it, I'd take off a few points for spreadability. Those half ripe plums have a lot of pectin in them. So for the second batch I decided to play mad scientist and mess with the recipe, something every book and article will advise against.
I started with 8 cups of juice instead of 5 and a half. I added the same amount of dry pectin, then when I had reached the 7 and a half cups of sugar, I tasted the juice and decided to add another half cup. The first batch was very sweet, and I wanted to preserve some of the plum's natural tanginess. After boiling it a minute, I tested the jell, and it just didn't seem to be adhering to the spoon at all. I put it back on the heat for another minute, then lost my nerve. I didn't want to play with the recipe too much, and my objective was to make softer jelly. I went ahead and processed the jelly, ending up with 11 and a half half pints. I had another half pint that I put into a pint jar with a plastic cap, and just set aside for eating.
When the canning bath was done, I had 11 plus jars of runny plum goo. The instructions always say to resist tipping your jars to see if they're jelled at risk of ruining the seal. All the lids popped almost immediately, though I admit I fiddled with the jars. After a couple of hours, I had given up hope. It looked like I had a whole bunch of plum topping, and I began to think of ice cream sundaes, and look up recipes for crepes.
Later I read one of the Ball brochures, and it mentioned that it could take up to two weeks for the jelly to set. TWO WEEKS? How could anyone wait that long? I went back to check the jars, now cooled for 5 hours, and lo and behold.... they had all jelled. Whew! What a relief! I dreamed of plum jelly all night, and for breakfast enjoyed two slices of toast spread liberally with the leftovers from the fridge. Mmmmm.... just the right amount of tart plumness.
Posted by SmartAlex at 4:55 PM