Over ten years ago my mother-in-law sold her house and moved into an apartment.  Around that time, a pair of refugee Garden Gnomes mysteriously appeared in the edges of our lawn.  I didn't shoo them away, I let them stay.  They weren't too bad for Gnomes.  I'm not really into garden art.  Sure the odd bird bath or chicken may appear.  But I'm not the kind of person who appreciates gazing balls and bottle trees and other junk hanging around.  I don't like to have to move things when I plant or weed.

I learned to accept and cohabitate with the Gnomes.  They stayed out of my way and I ignored them.  They migrated around and spent some time holding the door to the coop shut like little orange door stops or lounged on the mossy stump in the backyard.  They weren't really well dressed to begin with, but over the years the Gnomes began to look really Shabby.  Their unattractive orange green and tan (ick) clothes rubbed off. Their faces were pasty and pale.  They were getting pretty ugly.


I searched my years of photos for pictures of them in the natural habitat.  But there are none.  I realized that if I was taking a picture out and about in the garden, and the gnomes were there, I'd move the ugly little gnomes.  I've been ashamed of the poor little guys.  It's not their fault.  What could they possibly do about their shabby clothes?  So I decided to paint them.  Time to renovate the Gnomes.

I searched Pinterest for examples and it seems the prevailing style for Garden Gnomes is red hat, green coat and blue britches.  So that's what they got. 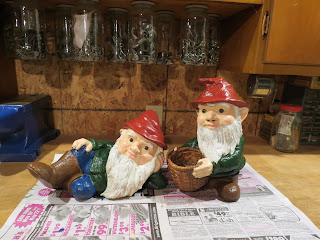 They're looking pretty spiffy.  And it gave me something to do on a cold windy snowy weekend.  Luckily we also had a large pile of brush to be burned, and a cold wet snowy day that felt more like October was just perfect weather for a huge bon fire.  It was actually fun.   Over a few days I'd go down to the work bench and paint a color.  I had fun mixing up the flesh color and adding life-like pink blushes to their face and hands.  Now I really like my Refugee Garden Gnomes.  We've bonded.  Everybody feels better. 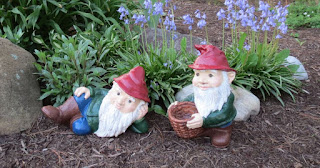 Now I can tuck them into leafy woodland settings.  They may appear in the corners of many photos.  I think they need names.  Any suggestions? 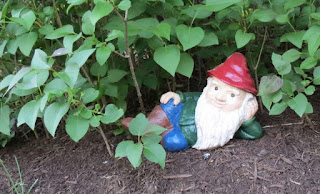 Posted by SmartAlex at 5:58 PM