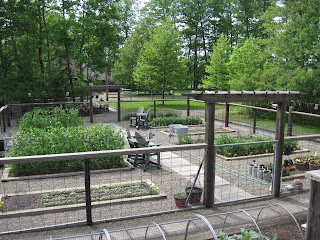 I know almost all of America has been dealing with unpleasant, tumultuous or dangerous weather this year.  Here in western New York we have had a lot of Blah weather.  Cool.  Overcast. Rain.  Rain. High winds.  Did I mention rain?  Every weekend this spring, we might get one (or half of one) sunny day but we will also get at least one rainy or stormy day. 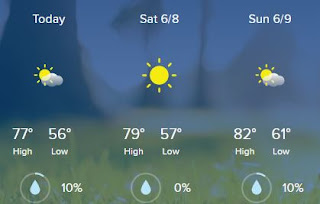 My rainfall total for May is just over six inches.  Four to five is a much more reasonable number.  This weekend is supposed to be mid seventies to eighty degrees and sunshine and everyone in the area is collectively excited and looking forward to some nice weather.  The weather forecasters have been promoting this as a "Top Five" weekend.  I sure hope we get more than five. 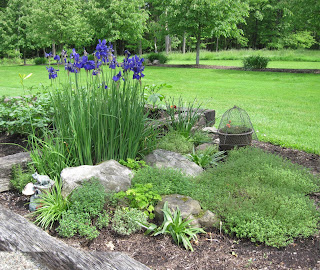 Last night I was touring the landscaping, spraying deer repellent on all of the iris and lily buds, squishing through the lawn in water deeper than my flip flops, when I noticed that in the "wilderness" strip of brush and trees between the large garage and the vegetable garden, there was several inches of standing water.  Can you say M-o-s-q-u-i-t-o?  And here I was worried that we no longer had enough habitat to keep our dragonflies fed... 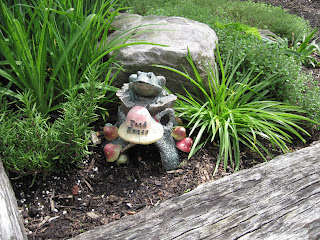 Pests report for this year so far.  Obviously, mosquitoes and biting flies will be abundant.  Coons are scarce.  I have only seen signs of them feeling around once.  Something has been digging for grubs a just a little bit in the lawn as opposed to some summers when all of the sod has been torn up, but I believe it is a skunk that has been through the garden walkways regularly and not multiple coons like some years.  We regularly treat the lawn with Milky Spore to keep the grubs down.  I'm sort of hoping the grubs have all drowned, however U of K says that Japanese beetle grubs can withstand high soil moisture, so excessive rainfall or heavy watering of lawns does not bother them (source)   Bummer.

When will we ever get on top of the chipmunk population?  For several many years in a row we have killed at least a dozen.  We don't bait traps, we just place traps where the chipmunks are not supposed to be to keep them out from under the house and out of the drainpipes.  Our count is up to eight.  We started in February.  Its ridiculous.  And I have one red squirrel that almost every day I see him run out of the woods and smack into the garden fence.  He isn't trying to get into the garden because he doesn't climb the fence and he goes on his way to the other wooded area, but he is obviously a bit dumb or near sighted because he always hits the fence in the same spot behind the daylilies.  I've named him Crash. 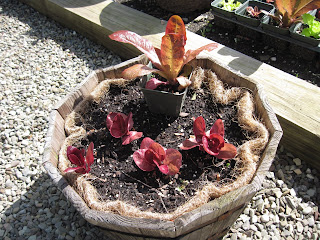 Back in mid-March when the weather warmed up enough that I could get out to the cold frame on a regular basis, I seeded some lettuce in containers.  It didn't give them any sort of head start.  Here they are next to one of my mid-April plantings.  And the potted one is what is left after the three larger batches have been planted. 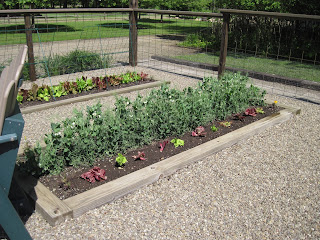 Obviously the planters weren't doing well and didn't deserve any more attention or worry with all of the other lettuce available but I'm not the sort to throw out a plant, so I dug them out and planted the better ones along the Easy Peasy  peas interspersed with some of the potted lettuce because most of what came up in the containers was red romaine and I wanted more variety.  I probably should have done this earlier in the week when we didn't have three days of sun forecast, but they'll be fine.
Its hard to kill lettuce 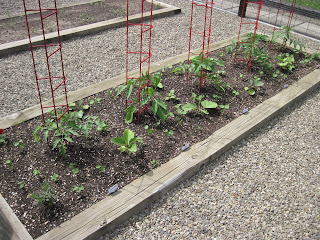 The tomatoes have tripled in size and the Paul Robeson is already blooming.  The eggplants are established and the Nasturtium seedlings are growing fast.  This year I only saw one flat of Nasturtium in the greenhouses and it wasn't Alaska, so I'm glad I got two packets of seeds. 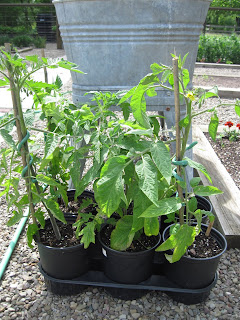 My spare tomatoes are doing awesome.  Two of them are blooming and I had to stake them.  If my Dad doesn't take any, these will have to go into containers because they are way too good to waste. 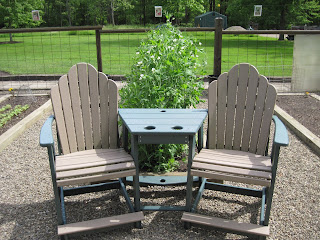 The Garden Sweet peas are actually growing better than the Wando which usually reach six feet tall.  Something tells me this variety will need extra tall trellis in the future. 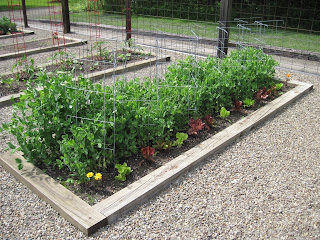 These are the Penelope Peas.  You can see that the left end of this raised bed must be a little "hot" with nitrogen.  That is the spot where the one cucumber vine produced July through September. 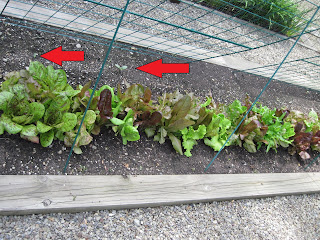 This is my non-existent row of cucumbers  In addition to the cool soil and cloudy weather, each time I seed them we get a torrential downpour which buries them too deeply.  Yesterday two seeds popped up, and today two new ones add those to the one plant from last weekend that hasn't done a darn thing and I now have five teeny tiny cucumber plants.  Yesterday I also put one packet of seeds into pots in the cold frame as a backup plan. 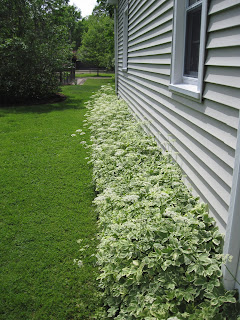 All of the perennial plantings around the landscape are doing well, but this snow on the mountain cracks me up every time I walk by it.  It is so dense that the Creeping Charlie has turned around and is trying to get back out. 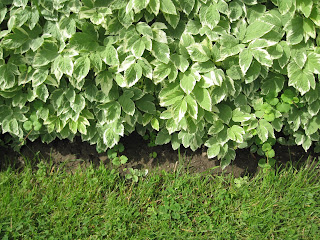 Anyone who has dealt with Creeping Charlie ought to appreciate that.

Posted by SmartAlex at 3:13 PM