It was mere months ago when my strawberry rhubarb bed was fresh and manageable. 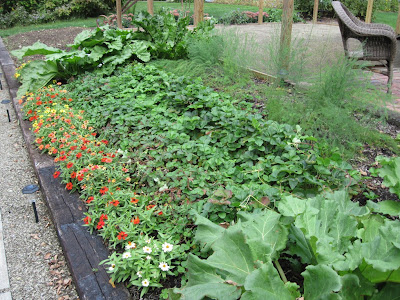 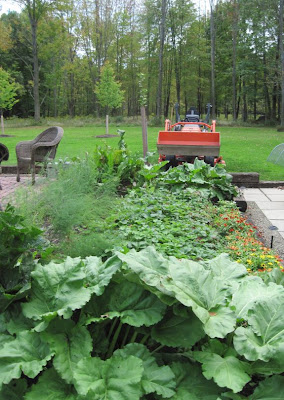 Despite pulling yellow leaves from the rhubarb each week, it has gotten HUGE and threatened to take over the world. The strawberries are right behind it sending runners through the wire of the cages with intent to blanket every useable growing space for a 3 mile radius. I've sort of let it go. It's something you can do every day, or once a season. It used to be easy to "renovate" my berry bed. I would just turn Tim loose with the lawn mower (deck at it's highest setting) and he would mow it. 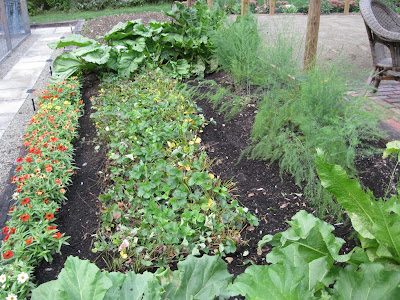 The time to renovate a strawberry bed is just after the last harvest. My berries are supposedly everbearing, so I waited until now, since they should produce a second, smaller crop in September. They sort of did. It wasn't a harvest, more like an occasional "oh there's a berry. Is it worth going after?" I've opted to let the rows fill in between each other. I can easily reach through from both sides. We'll find out whether or not this is a mistake in regards to air circulation later. Now that things are under control, I may go back in there and work on it some more. 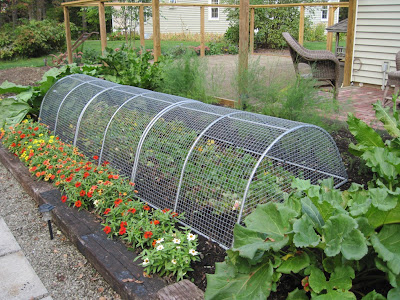 I trimmed the plants to 3-4" above the ground, but my main goal was containment. I ruthlessly pulled and weeded out all the runners on the sides and ends so the cages fit back over, and raked and tidied the mulch on each side. All is now in order. I will mulch them after the first frost in preparation for the snow.
Posted by SmartAlex at 4:00 PM