What's cookin' in my garden

We are approaching the end of the second March on record where our area has had zero recordable snow fall. Which means it has been absolutely gorgeous out. The snow is gone, the ground is firm. We've had just a little rain and the lawn has been rolled. It is absolutely killing me that I don't have the perennial beds raked and edged, but I think I'll get that done this weekend. After all, it's supposed to be pushing 80 degrees, and I have Good Friday off. There couldn't possibly be a better situation.

I planted eggplants and peppers last Sunday, a week later than usual, but I'm stalling a bit. All but two varieties are up and doing well. The tomatoes go in this weekend.

So, what have we been up to? Planning. We have a HUGE project in the works. We are converting the 50x50 vegetable garden into raised beds. 12 beds, 3x12. 6 are mine, 6 I will share with the neighbors. This is both expensive and a mind boggling engineering feat. Why is that? Because the ground slopes, and the fence must be level. And so must be the planting beds. This is keeping my husband up nights. We have 15 inches of fall in 54 feet. Which, actually is ideal since we will be running french drains under the walks, and we need some fall to get the water to the ditch. But, he hasn't worked out how to make everything level on a slope. Don't worry about him. He'll figure it out. He'll get the back hoe out, and I will spend endless hours standing with the survey stick thingy making notes on a piece of paper while he shouts across the lawn and quizzes me endlessly on what numbers I just wrote down. I've been through it all before.

In the mean time, we have been collecting materials. The fence will be cattle panels on 4x4 posts, with 6x6 posts at the corners. Two gates which the neighbor is supposedly fabricating which are wide enough to drive the smaller tractor through. The beds will be 6x6s half lapped at the corners. The paths will have stabilization mat and gravel but also 2x2 concrete pavers between the beds, and 3x3 concrete pavers up the middle. All these pavers have been pile around here for years and used here and there as necessary. They have finally found their final purpose. Under the fence will be 2x6 edging to keep the gravel in and the grass out. 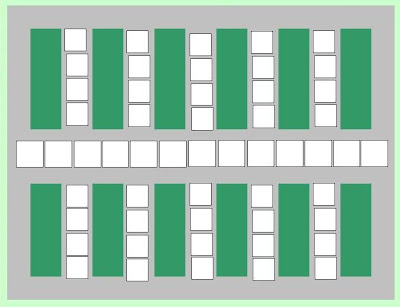 Somewhere under the center walk will be the 500 gallon tank collecting rain water from the roofs. There will be a spigot on a post for the garden hose. The drain lines must be run as well as the electrical. We also need to run the electric to the garden shed and chicken coop.

So, yes this is a huge undertaking. But, when we're done, I will have low maintenance beds which (with intensive planting) will give me MORE row space than I had before AND I will never have to rototill the paths and wade through muck ever again. I will just have to fight the usual battle against purslain which will probably continue to thrive even in gravel paths.

So, that is just a breif preview of the next two months. I will be documenting each stage. The goal is to have one raised bed done in time for planting tomatoes and eggplants.
Posted by SmartAlex at 9:53 AM 2 comments: