I refuse to come out of hibernation just yet. To everything there is a season, and my gardening season does not start until March. But some of you may be wondering what we've been up to. 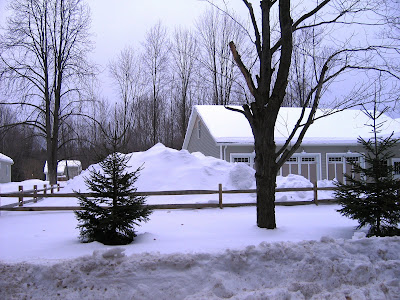 I started a new project. Upon a White Horse. After years (ok, decades) of wishing and dreaming, I finally purchased a Side Saddle. And I am endeavoring to teach myself to sit on it, which is proving no simple task. 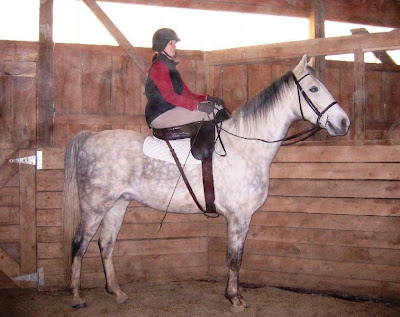 I've also planned myself a dream vacation and will be spending one weekend in March staying at Hunter's Rest in Virginia and going Fox Hunting with the Old Dominion Hounds. Which, in this day and age would be more aptly called "fox chasing" so don't be worrying about those clever little foxes. They'll be just fine. After hunting, we will be going off to the Warrenton Hunt Point to Point Races to hob nob and tailgate with the Virginian horsey set. And, because "Virginia is for lovers", I will be towing my husband along with me.

Tim has not been strictly in hibernation either. For one thing, we're having a good ole fashioned winter, and while our snow totals aren't breaking any records, they are certainly keeping him busy plowing and shoveling roofs. Consequently, we are now into our 6th batch of Glogg, which IS a record breaker.
When he's not out plowing or shoveling, he has been in the house finishing up those little projects which can go unfinished and largely unnoticed for decades. He has painted and installed baseboard in the linen closet, repainted the laundry closet, and upgraded the cabinets. 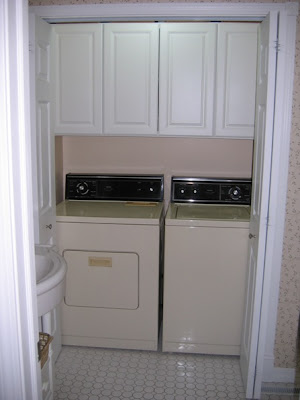 And the pie'ce de re'sistance, he has finally hooked up the dish washer! We bought the dishwasher and put it in it's spot when we did the kitchen back in 2005. But it's never been hooked up. About 2 years ago I began using it as a storage cupboard for candy and light bulbs. Then last fall I began hinting the space might be more efficiently utilized if we just threw the darn thing out and put in drawers.
This week, Tim suddenly decided to hook it up. All went smoothly (too smoothly) at first. But when he turned the water on to it, the thing began to fill. For no reason at all. And it continued to fill. He ran it through a cycle, but it did not drain. Well, maybe it drained, but it also continued to fill. Until it reached a critical level, and then it began to drain. Out the door. And across the floor. And under the cabinets. And into the basement... you get the picture. No good dead goes unpunished.
So he turned the water back off, mopped up, and priced a new valve, because obviously this one was either defective or had found some way to malfunction in the past ohhhh.... 5 and a half years of inactivity. The next morning, just for giggles, before he headed to Sears for a part, he turned the water back on. And lo and behold, in the night, the dishwasher had awakened from it's slumber, found it's special purpose, and decided to work. No flood. Needless to say, this has made him more uneasy than he was before. He will not leave the house with the water to the dishwasher on. 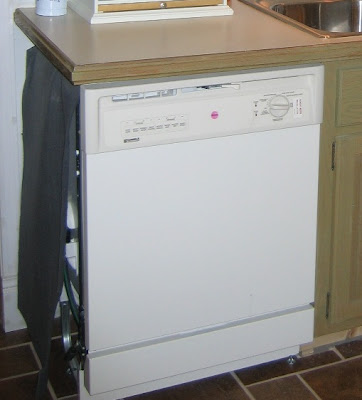 While it will be nice for me to have a dishwasher, it really won't make much difference to me, since Tim does 99% of the dishes anyway, and I always make it a point to use as many pots and pans and utensils as I possibly can, when I prepare dinner, so that he will feel wanted and appreciated. What really excites me is the prospect of getting the end panel installed so I no longer have to look at the inner workings and insulation of the dishwasher every time I come into the kitchen.
But of course, we've been doing some garden preparation as well. I have thoroughly enjoyed trading seeds with some of our readership. I've met some very nice people, saved money on my seed orders, and gotten some rare and unique varieties I would never have thought to order, would not have been able to find. I'll be highlighting some of those between now and seed starting time in April.

Also, the neighborhood onion order has been placed with Dixondale Farms. What I like about these people, is that they categorise their onions by "length of day" growing conditions so you can choose from varieties that will do well in your area. They also give detailed information about storage times so you don't end up with all onions that will go bad in a month. Bob and Trish are in charge of onion recommendations, and they certainly have steered us well in that regard. I ordered the Long Day Sampler, and Shelly next door ordered two other long day varieties so we will have a total of 5 varieties growing in the garden to share. Now that's co-op gardening at it's finest.
Posted by SmartAlex at 3:00 PM 2 comments: