Well Spring, we're going to go ahead without you!

We did finally get two nice days in a row and I got a lot done.  The raised bed garden is prepped and ready to go.  Two rows of peas and some carrots seeded.  Three flats of lettuce seeded in the cold frame.  Over-wintered plants spruced up, potted up, trimmed up.  And I've started on the landscaping. 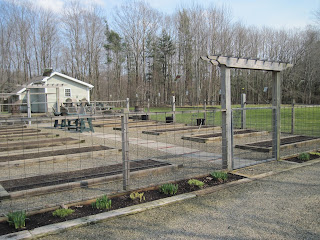 March is usually the best time to start cleaning up and mulching the landscape.  You don't have to work around foliage.  You can see the dandelions that are hiding in clumps of perennials.  The soil is soft.  I'm a month late, but everything still looks like March.  This past weekend I scooped all of the puffball fungi out of various areas, raked the myrtle bed, the snow on the mountain bed and the chameleon plant bed to clear out all of the pine needles, oak leaves and dead stems from last year.  I dug out a few things that I'm tired of. Then I mulched the areas with the most daffodils because in a few weeks they will be in full bloom and it will be too late.

As I mentioned in my last blog post, I will no longer be sharing my garden with the next door neighbors.  I need more room to properly rotate crops and rest the beds without struggling with planning and the constraints of succession planting.  But don't feel bad for the neighbors.  We are in the process of designing and building a garden in a spot which is out of the way for us, but very convenient for them.  If the neighbors tire of gardening (why would they?) then I can still use it for planting field pumpkins or an asparagus bed or raspberries or something.


This plot of land used to be a brushy wooded area, but it is also in between areas which have been developed and over the years it has become lawn by default.  It is behind the mulch bunkers, and beside the drainage ditch, and near the neighbor's barn.  And because of this, it has become relatively flat and mowable.  It has full afternoon sun from mid-morning to sunset.  It is well drained and sheltered.

When the mulch bunkers were built, the area was cleared and the bunkers were leveled with loads of bank run.  This elevated the bunkers above the future garden plot, and created a slope that needs to be leveled.  The bunkers themselves were built from 2x6 lumber reclaimed from a temporary bridge that the town highway department removed.  They had been nailed side by side like a butcher block and asphalted over.  A lot of asphalt seeped between the boards giving them this ugly drippy effect. 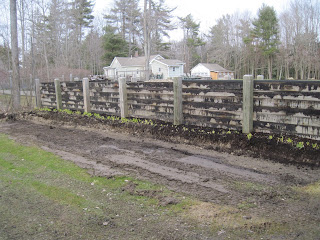 When we completed the water project two years ago, there was a patch of tiger lillies left over from the days when our frontage was open ditch and woody wilderness.


We scooped them out with the backhoe and plopped them onto a pile of top soil in the woods until fall when we planted them along the back of the bunkers.  We figured they would grow tall and fill in and disguise the ugly drips.  Which they did.  But now fenced from the deer they will take over fast.

Tim carved out the bank in front of the lillies and began placing railroad ties along it to form an elevated bed.  The entire garden area is going to be higher than the surrounding driveways, so he is placing RR ties all the way around it and will fill in with gravel. 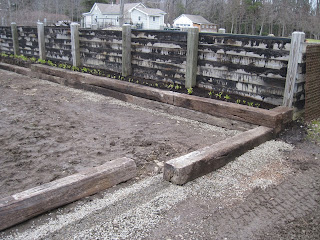 To make the mulch bunker look a little more attractive, I scraped all of the brittle tar drips off and Tim sprayed it with rubberized undercoating.  That neatened things up considerably. 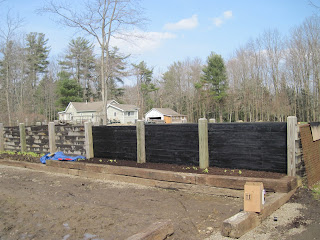 If this area ever dries up again, we can finish laying out and measuring so we know exactly what is going to fit in here and we can make a materials list. 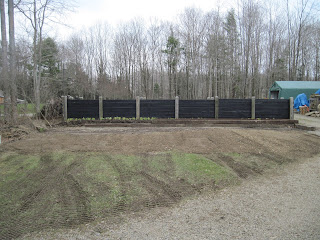 We are now in a holding pattern waiting for dry weather.

Posted by SmartAlex at 5:33 PM No comments: