After such a long cold winter it is so nice to finally have our outdoor life start up again.  Even if it is work.  I spent yesterday filling pots, counting pots, ordering more pots and running out of potting soil.  Today, after run to the store for more soil, and a trip to the farm for some composted horse manure, I began seeding lettuce in the cold frame. Tim commented as we left Home Depot with out respective items, that I am always buying stuff to grow things: soil, seeds, soil ammendments, and Tim is always buying something to kill things: weed killer, traps, poison....  I also cleaned a perennial bed, and rearranged my herb garden. 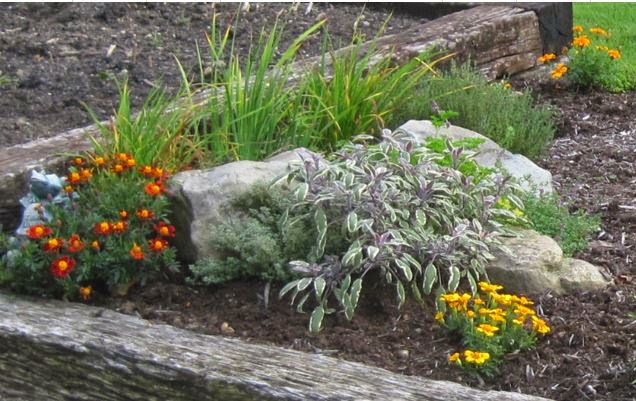 In a corner along the walkway from the garden shed to the vegetable garden, I have a grouping of large rocks which shelter my "perennial" herb garden.  The rocks hold heat as long as they can and shelter the herbs from the winter weather.  There are many herbs that grow back well from established roots and seed and may be considered perennial in your climate zone.  Most of those are invasive herbs like mints, Oregano and Lemon Balm, all of which I keep along the back side of a perennial bed, under the tree line where the tree roots starve them of moisture and the limbs limit their sunlight.  They still manage to survive tho not get out of hand too badly.  They sure do ramble.


In the rock cluster along my vegetable garden walk way I keep my Parsley, Sage, Rosemary and Thyme.  I know that list sounds unimaginative and that there are a lot of other herbs to be had in a garden, but these are some of the old stand-bys.  We’ve all heard the Simon and Garfunkel song Scarborough Fair, and Carly Simon also recorded a nice version of it a couple of years ago.  Have you ever wondered what it meant?


Scarborough Fair is a traditional ballad that originated in England and parts of it trace back to as far as 1690.  The song relates the tale of a young man who instructs the listener to tell his former love to perform for him a series of impossible tasks, such as making him a shirt without a seam and then washing it in a dry well, adding that if she completes these tasks he will take her back.   The herbs in the song symbolize virtues the singer wishes his true love and himself to have, in order to make it possible for her to come back again.


Although these herbs may seem commonplace in a garden, there are many unique varieties.  I love variegated leaves and I was able to find several variegated varieties to plant last year. I have green and white Sage whose new leaves are a deep pink or purple, yellow and green Sage, and variegated Thyme

I don't devote much time to herbs, and honestly I do not use them in cooking as much as I should, but in April when you are starved for something green and alive, a collection of bedraggled herbs are a virtual Miracle.  I had made notes last fall as to what I wanted to change about this little grouping, and this was the perfect time to do it when the plants are still dormant and just beginning to awaken.

I moved the large Purple Sage which I had transplanted last summer from some large pots that had overwintered to the center, and rescued the small green and yellow Sage from the center and moved it to the edge putting an ample amount of compost beneath it.  The taller parsley, which I hadn't expected to survive at all was moved to the back between a pair of day lillies.


After our busy day of hauling and shoveling and scooping, we sat in our chaise lounge chairs and watched the birds. Two years ago I put up a blue bird box.  Last year the house wrens got to it first.  I don't begrudge the house wrens their home, but they are such shy little birds that they are merely an idea of a bird on the edge of your peripheral vision and never seen.  Today, Tim said, that obviously the blue birds had gotten the utilities turned on and they were in and out inspecting the place and making plans for the future,  This is the beginning.  From now until Mid-Summer it's all uphill from here.

Posted by SmartAlex at 4:56 PM No comments:

With the weather warming up and the sun shining it is time to air out the house, chase the dust bunnies out of forgotten corners and give everything the once over.  Historically, back in the days when house were heated by wood or coal stoves, there would be quite a layer of coal dust and soot over everything.  House wives would wash down their walls, take the rugs out the beat and use a lot of elbow grease.  When wall paper became more common place, spring cleaning got a little more complicated.  You couldn't necessarily attack your walls with hot soapy water.  The paper would come right off.  So a substance was needed that you could spread on your wallpaper and then safely peel off taking the dirt with it.  After coal stoves went by the wayside, the manufacturers of wallpaper cleaners were in a bind.  Kutol had a bit of a brainstorm, added a little color and sold it as a toy.  And Play-Doh was born. 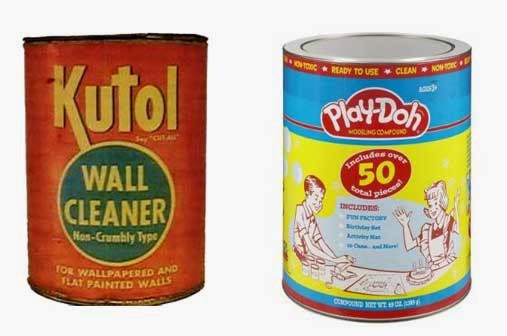 I've been giving the house a little more attention lately, and the sunny afternoons allow me to see the dirt in the corners a little better, but I'm glad I don't have to spread Play-Doh all over my walls.  I mention a couple of post ago that I have all the equipment to do laundry the old fashioned way - by hand.  I have copper boilers, wash tubs, wash boards, wringers, rug beater, hand plungers to agitate the wash, wooden tongs to pick the whites out of the boiling water, pulleys to run my clothes line across the alley, and line spreaders to keep my lines from tangling together.  I even have line winders, an old line prop to raise the line up and keep the sheets off the lawn and a host of clothes pins. 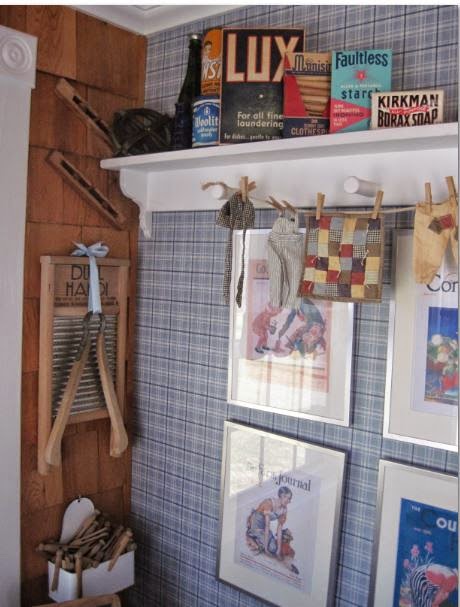 About a week ago my mother emailed me and said "Mickey left something here for you."  Mickey is the gal who has a nice little greenhouse where she starts her own plants for growing saleable produce and sells the extras.  She always has something unique and more than once she has saved me with some fun tomato variety when mine failed.  For instance the year my Absinthe plants failed to germinate but Mickey had some! 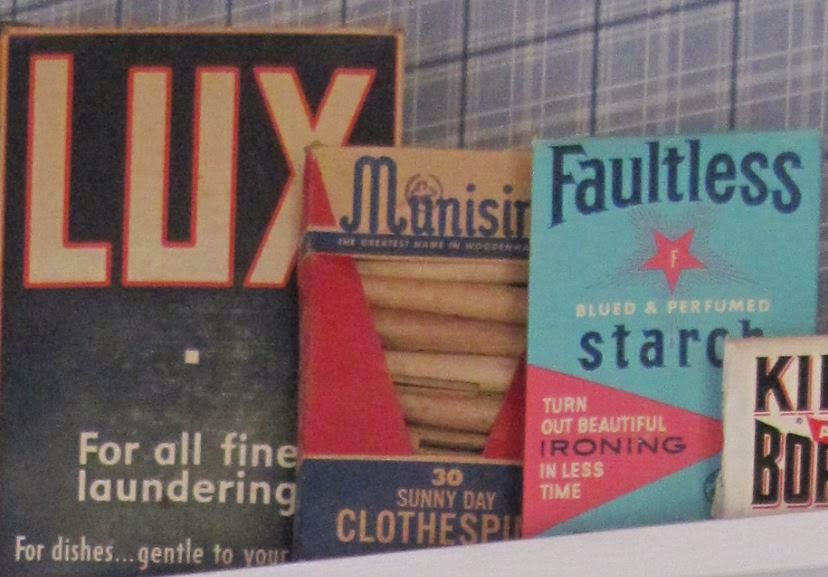 Mickey also like old stuff.  Last spring she mentioned that she had a box of clothes pins I might like.  And that was what she left at Mom's house (along with a loaf of home made bread for Mom).  So now I have a nice original box of clothes pins for my laundry collection,  Thanks Mickey! 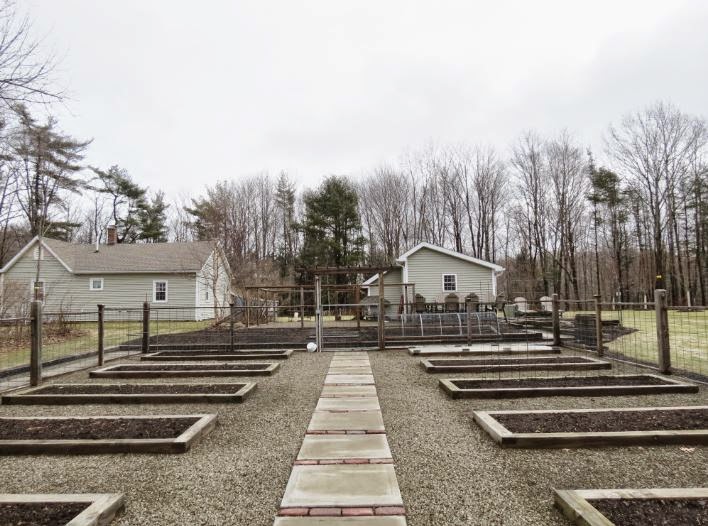 It is actually a pretty nice day out, despite the fact that it looks dreary.  For one, it isn't snowing.  It's 60 degrees and the sun peaks out now and then.  The sowing instructions for Garden Peas are: plant in early spring as soon as soil can be worked.  Well, people without raised beds are out of luck.  There is no way anyone will be getting out there with a tiller this early.  But the raised beds are ready to go and the first peas and carrots are in.  I will plant another batch in two weeks.

Different climates have different markers for when to plant peas.  In some areas of the country (and sometimes here if you're lucky) the date is St. Patrick's Day.  Here it is usually Good Friday.  Some people are skeptical about that since Good Friday can vary so much from mid-March to late April.  But it is always the first Friday after the first full moon after the Spring Equinox.  And many farmers and gardeners plant and breed livestock by the moon cycles.  So, weather permitting, I always plant my first peas by Good Friday.  Another good marker is waiting until the forsythia bloom.  But my peas are always sprouted by the time the forsythia even start to bud.

My favorite pea varieties are Wando and Maestro.  Wando, however, is a very tall pea topping out over 6 feet high,  My pea fence is less than 4 feet high, and that poses a problem because when the vines outgrow the fence, the wind blows them over at a right angle.  This makes it nearly impossible to pick the second shorter row because the neighboring vines are laying on top of the pickable peas.  So I purchased the Extra Tall Pea Fence from Gardeners.com and I think it will be tall enough to support the taller varieties.  This year I finally got the bright idea that instead of planting one bed with a row of shorter Maestro next to a taller Wando and then at a later date, planting a second bed just like it, I should plant a row of Wando in one bed, and the Maestro in the other and then two weeks later, plant a second row of Wando next to the Wando... duh right?  It's the simple things that escape me. 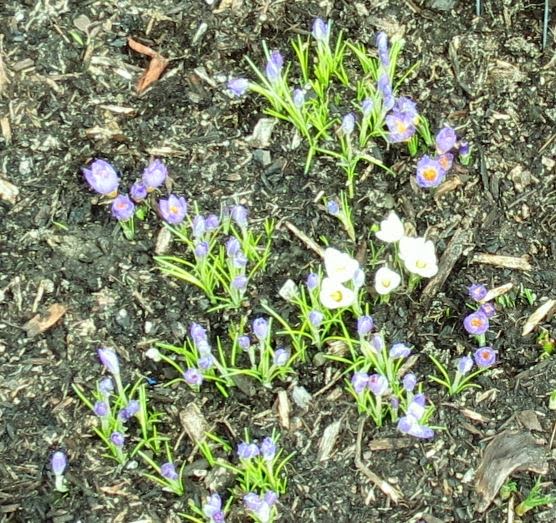 Last fall I planted a lot of daffodils, woods hyacinths and crocuses to brighten my garden and I am anxiously awaiting them.  The older established bulbs have been ready to bloom for two weeks and today they are finally brave enough to open just a wee bit. 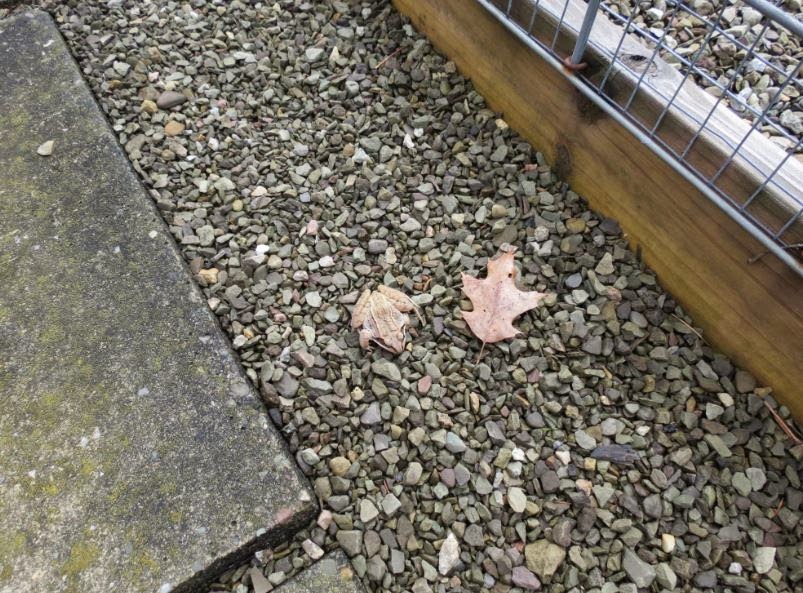 After planting the peas I went around with a bucket and began picking up all the old leaves and dead foliage that collected under the snow after we gave up leaf blowing last fall.  Most of them are oak leaves, and most of them collect in the corners, but after the corners were cleaned up I started on the walks just to get everything looking ship shape.  Until I came across a leaf that was surprisingly heavy and squishy. 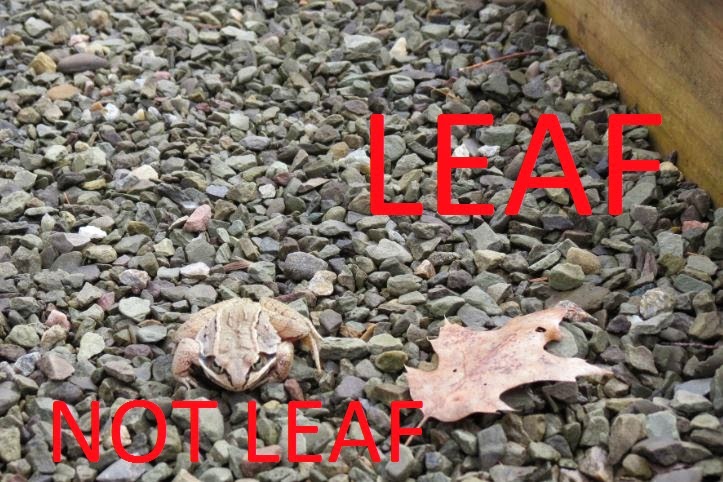 Closer inspection revealed that it was not a faded leaf at all but a very grumpy brown frog.

Besides peas and crocuses and leaves, my eggplants are up about an inch and doing well and I am on my way down to plant three different varieties of bell peppers along side of them.  I am anxiously awaiting the delivery of my strawberry plants and the sprouting of asparagus.