Are we there yet?: Side Yard

Did you ever have one of those projects that seemed to never end?  Our furthest side yard has been a never ending project.  I remember, 12 years ago when I first met Tim, it was a combination of scrubby woods and lawn carved in between trees.  There have been at least four stages of tree cutting that I have been around for.  I remember one day, way before these photos begin, when I was picking up sticks in the spring, and I had ventured into this brushy, wet, rough, hilly, crappy piece of land and was rounding up the larger limbs and such, one of the neighbors slowed down and called out the window "are you going to keep going until you can mow it?"... the answer was ...
Yes.


The biggest change came when Tim cut over 120 trees out to clear an acre of land for his big three bay garage.  Stumps were pulled, gravel was brought in, and half of the area became a driveway.  There was a strip of lawn, and he added a split rail fence along the property line which we landscaped in with neighbors Mike and Shelly.

There were a dozen or so scrubby, top heavy ash and poplar which we landscaped around but slowly, one by one, removed completely.


What had been a wet and uneven strip became lush green lawn.  Near the road, there was still an area of large oak trees on Mike and Shelly's side of the line.  The changes in use and grade of the surrounding land was causing water to pool, and the oaks were slowly dying. 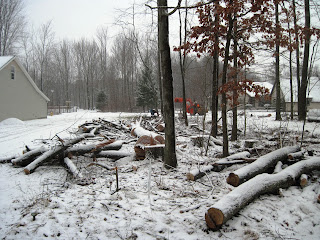 This past January we had a tree service come in and remove them.  This gigantic mess was worked on for months. 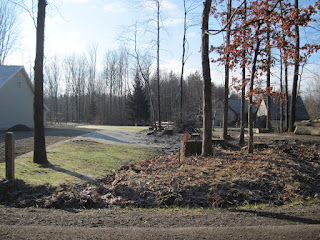 Logs were hauled to the mill to be salvaged as lumber.  Stumps were ground.  Loads of gravel and top dirt were brought in as well as new trees, a second section of fencing and grass seed.


﻿
Towards the end of summer, Mike's new lawn near the road had thickened up, and it was time for the final addition, two large Crimson King Maples which he and Tim planted this past Saturday.


The final transformation, which began the end of January is now complete.  The final count is 9 Blue Spruce, 4 London Plain Sycamores and 2 Crimson King Maples.
We are done picking up sticks, and now that it is mowable, we can quit.