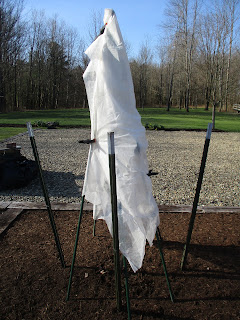 Last Saturday a 4-in-1 pear tree that I had mail-ordered arrived. Its a nice looking little tree, but it is fully leafed out. The wind was brutal on Sunday and I knew we had frost coming so after planting it I used bean poles to build a teepee around it to support a frost cover. Good thing too because not only did the wind not let up for three days but Tuesday it snowed on and off all day.  A driving bitter snow that at least didn't stick. I watched the poor little tree from my window, and prayed. 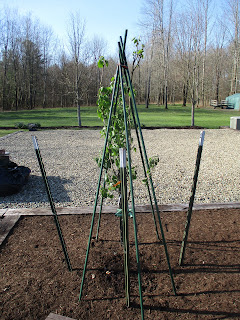 So far it doesn't look frost burned or too awful unhappy but transplant shock is probably an understatement! Only the one branch to the lower right looks like it got damaged by frost.  There are a few leaflets here and there that are dry and limp, but overall the tree looks remarkably healthy after its ordeal.  After all, it did get uprooted, stapled into a box and trucked across several state lines. 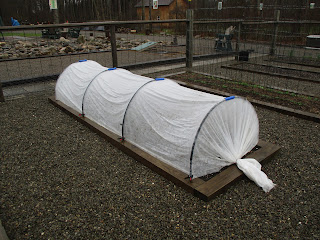 Another thing that happened last weekend was that I saw a cabbage moth.  I saw one again yesterday.  That meant that I needed a row cover over the cauliflower from day one.  Else I will be fighting little green worms all summer long. I had thought I might be OK to at least mid-May.

I already had planned my hoop-house.  My husband had some leftover half inch black water pipe laying around and we always have a good supply of re-rod for projects.  We drilled into the side of the beds, tapped an eight inch piece of re-rod down into each hole and slipped the ends of the loop of water pipe over each rod.  My old frost covers are a little tattered.  I have brand new ones on order but they haven't arrived yet.

We spent yesterday, which was warm and fairly sunny, finishing up some other projects.  While I got a lot done in the garden, I didn't get my cauliflowers planted.  I did that this morning in a drizzle.  Today is actually a perfect day for transplanting.  Its fifty degrees with no wind and a constant drizzle.  Sun not predicted until Tuesday.  The transplants have been hardening off in the cold frame for a week.  No pictures of the transplants because... well, it was raining and I just wanted to get done and back into some dry clothes!  We'll discuss cauliflowers next weekend! 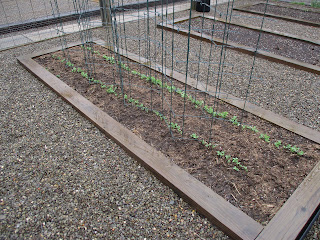 First and second planting of peas are up 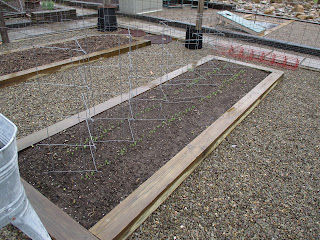 Third planting also up.  Fourth not sprouted yet.
I have a total of seven ten foot rows planted. 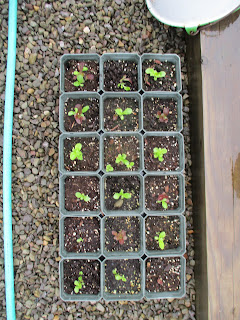 The lettuce grew visibly yesterday in the sun. 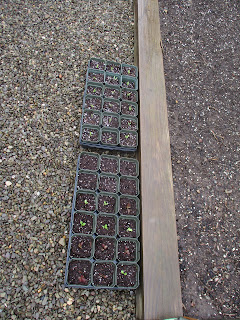 This morning I uprooted some of the pots where more than one seed germinated and planted twelve more pots of lettuce.  I now have enough for two rows which will be plenty.  I've also broadcast old lettuce seed down each side of the pea rows because I couldn't resist.  The flat up on top of the photo holds Calendula seedlings that are volunteers I picked out of one bed that keeps re-seeding.

Everything still looks a little bleak and barren.  Its still a blank slate but will soon be green and colorful.
Posted by SmartAlex at 12:32 PM 1 comment:

Seed Ordering During The Coronavirus Emergency

I just wanted to save some of this for posterity so we can look back at the surge of home gardening. Click on the pictures for a larger, readable version. It just sort of boggles the mind.  It isn't uncommon, before spring is over, to go looking for a certain variety and have most suppliers sold out, but this wave of orders is just unprecedented. 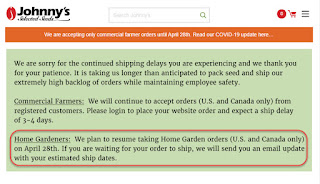 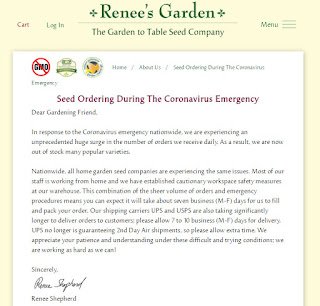 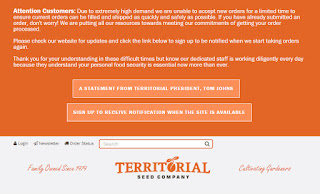 Luckily I ordered all of my seeds in January, but there is no going back and deciding that this year I want to start all of my herbs.  Not unless you want to pay shipping for a pack of this from here and a pack of that from there.  it just isn't cost effective.

The one thing that was stressing me out was the potting mix for my tomatoes.  This year I plan to grow tomatoes only in containers, after last year's accidental success.  The used soil in my dirt locker is earmarked for carrots and potato bags.  I feel it is wise to begin with fresh potting mix for tomatoes because it is less likely to harbor disease.  I did have a bag and a half left over from last year because I always make sure I get at least one bag in the fall so I have it in the spring when I transplant my seedlings and I don't have to chip it out of a frozen stack on a miserable day and load a mucky, frozen bag of soil into my car.

Well I did get my garden soil from Home Depot.  My husband needed a window well cover to replace ours which was destroyed in last week's hail storm.  Our HD has hours from 6 am to 6 pm.  We got up at 5:30 Saturday morning and when I walked out the door I had failed to realize that we were in the middle of a snow storm.  Pitch dark, high winds, two inches of snow on the ground, and more falling.

We were the first shoppers through the door at 6:10 am.  Hubby went one way and I headed out to the snowy, blowy, but well lit Garden Center.  I had to brush the snow off of the pile, but I got my three large bags of potting mix and made a round to see if they had Milorganite (which they never do and this was no exception) or any other highly valued garden supplies that I won't want to have to make a second trip for.

I did note, on my way to the check-out, that they had stacks of toilet paper right by the entrance.  That's another highly sought after resource.  After loading our treasures in the car, we stopped by the grocery to pick up some milk and headed home.  We were home and back in bed by 7 am trying to convince ourselves that it had all been a bad dream.
Posted by SmartAlex at 1:21 PM No comments:

Every year I do some things a bit different.  There are the old standbys that I just try to improve on and then there are things that I do now and then.  Sometimes, I try something I've never tried before.  That's what keeps things interesting.  This year's experiment is Lima Beans.  I figure I'm already really good at growing beans so I'll just add some variety. 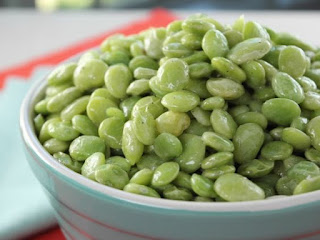 Growing up, Lima beans were a staple at our dinner table.  I've eaten a whole lot of them in my day.  They were a favorite of my Dad's.  His mother used to serve them with her home made Catsup, a spicy, pasty concoction that I did not fully appreciate in my youth.  We dressed them with regular Heinz ketchup which isn't the same but its OK.  Not really a normal condiment for beans.  But then most people don't mix Miracle Whip with their cottage cheese or noodles with their chili either, so there is no accounting for regional taste! 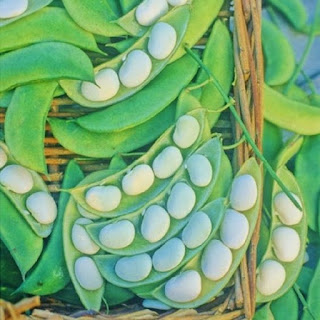 Anyway, I figure that Lima Beans shouldn't be a too big a leap for my husband's palette, and with any luck he will actually like them and we will have another vegetable to store in the freezer and add some variety to our routine of meals. 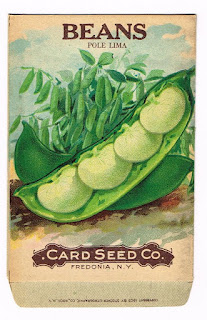 Garden planning is right on schedule so far this year.  I am one of the lucky ones who placed their seed orders early (January) because more seeds than normal are running out of stock and running out early.  Some seed sites are closing down periodically to regroup and deal with the masses of orders.  Some have stopped taking phone orders to reduce the need for live manpower.

Johnny's Seeds, which is one of my main suppliers, has stopped taking all orders with the exception of their commercial customer accounts.  And for a time I couldn't even log in to check on the status of my potato order.  When I finally got through, my potatoes were marked as Unavailable.  My sweet potatoes are still coming, but I quickly found an alternative source for my chosen varieties for this year.  Mainepotatolady.com

This virus has set the world on its ear.  I hope we at least get good weather this year so all of the beginner gardeners will have success and continue to popularize growing food.  Its like a new age Victory Garden movement.

They used to call April "The Hungry Gap" because stored food was running low or going bad and no fresh food was growing yet. America hasn't felt the Hungry Gap this acutely in decades. All of our shopping habits have been disrupted. New gardeners are trying to learn to grow their own food. Old gardeners are altering plans. Supplies are running thin in places. I have my peas, lettuce, carrots, cauliflower and strawberries planted. Now we wait. 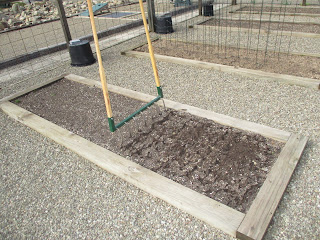 This weekend I began preparing two beds for my cauliflower plants which will be set out not this coming weekend, but the one after that, when they are 5 weeks old.  The first step is to loosen the soil with a broad fork.  I've found this to be very helpful for my raised beds particularly in water absorption.  I had a couple of beds where the soil got compacted enough that the water would either pool or run to the low side (yes, my garden is on a grade).  After a bed has been aerated with a fork, water disappears into it like a sieve which is a better situation.

At this point I add my soil amendments and then rake it smooth.  This way, the amendments are worked into the top few inches (dropping through the holes) without having to turn the soil. Cauliflower are heavy feeders.  I added blood meal and some bone meal along with bio-char soil conditioner, and earth worm casting.  My goal is to improve the overall health of my soil, not just add nitrogen.