Looks Can Be Deceiving

I didn't really have a busy weekend planned.  I wanted to plant some peas, maybe seed some lettuce, putter around the garden getting the porch planters ready for pansies.  I wanted to do some other constructive things like laying out the new panels for the cold frame and running the vacuum cleaner.  But that all went by the wayside Friday morning when one of our biggest pine trees came down in the high winds.  Not that I don't enjoy tree cutting days.  I love spending the day outside getting dirty and picking up heavy things.  Its the perfect antidote for forty hours sitting at my desk munching on Chex mix.  But I prefer to plan for them.  And given the choice, we would have had the tree service cut this one. 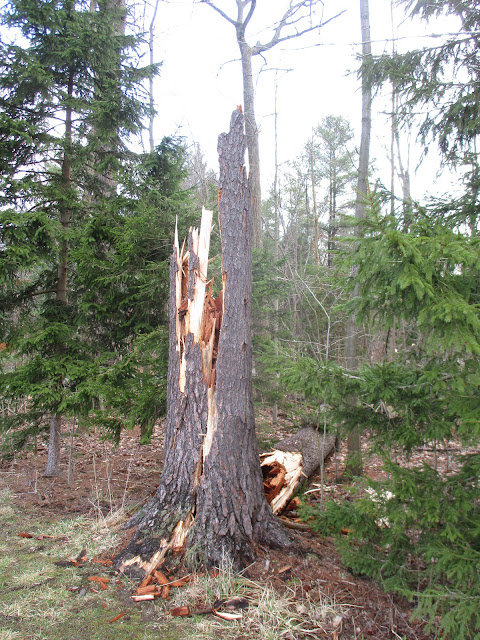 Every time I walked down the driveway to get the newspaper I admired this tree.  A hundred years old, over seventy five feet tall, thirty feet of straight trunk before the limbs branched out. So big you couldn't wrap your arms around it, but two people could join hands around it.  I imagined how many board foot of beautiful clear pine was in it  But, looks can be deceiving.  Little did we know, it was rotten to the core. 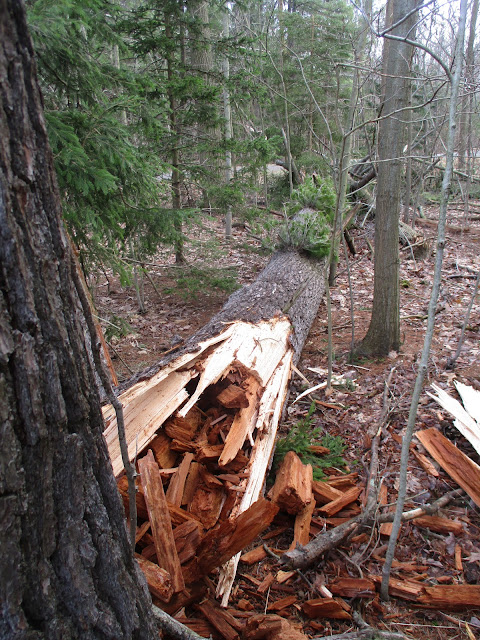 We had high wind warnings for Friday.  When I left for work it was just whipping up, but there were still no branches down.  A couple of hours later, my husband called me at work to say our power was out and also that this tree was down.  The tree didn't take the power out, but that same gust of wind took out a pole half a mile away.  Just snapped it right off.  We installed a whole house generator last fall.  It responds so quickly to an outage that I don't have to reset the clock on the microwave.  So he heard the generator come on, and then as fast as he could reconcile in his mind what he was hearing and that the power was out, he heard (felt) a BOOM. 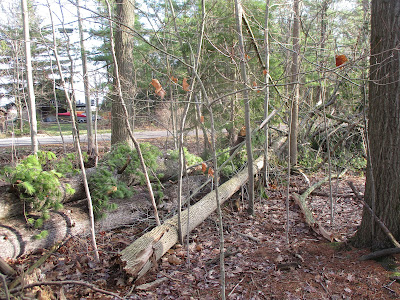 The tree fell into the wooded area taking with it some big red oak limbs and a few smaller trees in its path.  Note that the pine tree is a double trunk in this picture.  That split was a good 30 feet off the ground.  The top was a tangled mass of pine branches, oak limbs and saplings and it was all laying in the ditch about 3 feet below the road grade. 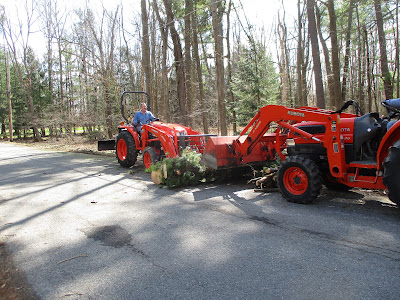 Saturday morning, our next door neighbor came to help, and cutting commenced.  We started at the branchy end, cutting whatever limbs they could get to while I piled.  We threw most of the branches up on the road edge to be removed in large piles with the tractor forks because there was no way to get a tractor in through the woods to the tree and then back out again with a load.  The the upper limbs were cut into 8 feet lengths and skidded out with a chain, up the bank and onto the road.  Then we'd use the tractor with the loader to roll the logs onto the tractor with the forks.  It took three long logging chains to reach some of the logs from the road.
We live on a dead end, but there is still a lot of traffic on a Saturday morning.  As each log was skidded out I would remove the chains, shortening the distance between the log and the tractor until it was out.  As we worked I had to keep the piles of chain out from under the tractor and the logs and the traffic which meant dragging them across the road to the other shoulder.  By the end of the morning I felt like Jacob Marley's ghost wrapped in chains and I was tired.  Upping and downing out of the deep ditch only added to the fun.

But there was no time to be tired.  We needed to find our second (or third) wind because as we got closer to the stump, the logs got bigger.  A lot bigger.  And they were still solid, not punky like the base. Each section had to have a chain wrapped around it.  The sections were too heavy to roll or shift by hand in any way so we had to burrow under each one and shove the chain through. 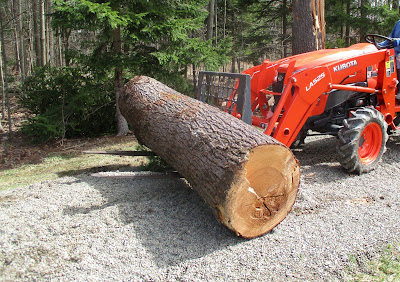 The last section of log is just showing some rot on this end.  That cut right there would have been about 20 feet above the ground.  Below, the neighbor can just be seen standing behind the stump.  You can see where his shoulder height is compared to the tree. 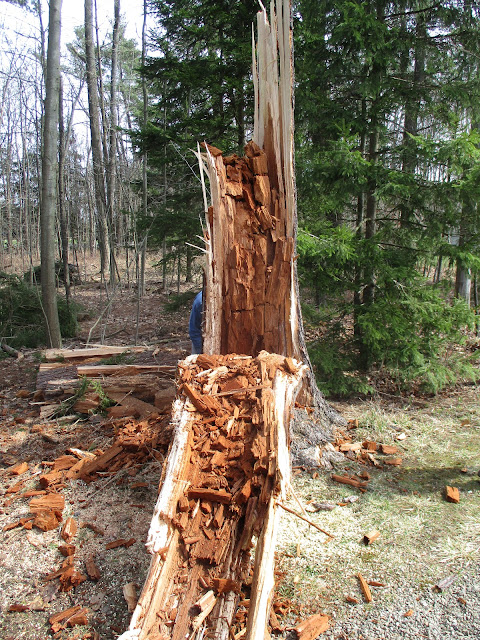 Now we have a HUGE burn pile plus a dozen logs to deal with.  I realized at some point during the morning that we should have invested in an industrial sized chipper shredder... about 20 years ago... possibly along with a crane truck.  They would have both paid for themselves by now.

The first day of Spring has come (and gone) and it is officially gardening season.  And I realized that as far as what work needs to be done in the garden, the answer is "Everything but nothing".  That doesn't make any sense.  But it does.  We are at the starting line and Everything needs to be done.  We just can't (or shouldn't) do it yet.

It is still too early to bring all of the large pots and plant supports out.  Too early to start edging and mulching because some of the beds in shaded areas are still frozen while the lawn is too soft to drive the tractor on.  I've filled containers with soil for the carrots, and already planted two rows of peas two weeks apart.  The cauliflower seedlings are almost ready to transplant.

So far, taking advantage of the mild weather we've been having, we started by going over all of the gravel areas with the leaf blowers removing pieces of twigs and dry chunks of mulch and general dirt making everything look clean and ready to go.  I've raked out a few landscape beds so they are a nice backdrop for the daffodils that are emerging.

The weather will be up and down and all over the place for the next month.  In fact, it snowed last night.  Now we just have to sit tight and wait.

Posted by SmartAlex at 10:49 AM No comments:

It's Time!  The earliest plantings in my schedule are seeding the cole crops indoors and direct seeding the first planting of peas.

Last year I wrote about my seed starting set up and my theories behind the different methods of starting and transplanting and the supplies that go with each.  This morning I seeded my cauliflowers and I thought I would do a more detailed step by step of what I have found to work for me. 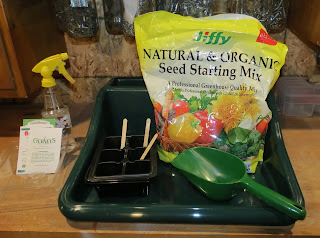 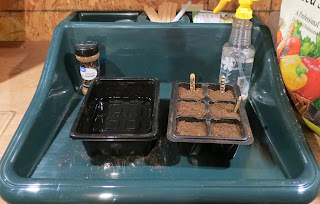 I use the Koram bottom watering seed starting cells for starting the seeds and then sometimes the initial transplant.  This year I plan to transplant into 4 inch pots not the cells, but these are still the best for the first step.  The tray on the left has no drain holes.  I start with the tray about an inch full of water.  This will dampen the seed mix through the cell drain holes from the bottom up. 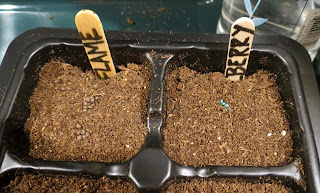 Some people dampen their seed mix before they fill their containers, but for me that is even messier.  I like to start with the mix dry.  I fill my cells most of the way and then set the seeds on top.  I am intensive planting these and will separate out the individual plants from the clump when they set their first true leaves.  These are Flame Star and Mulberry cauliflower. 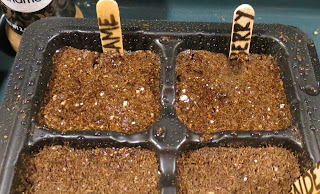 Then I sprinkle more seed mix on top and use a spray bottle to dampen it thoroughly.  Between the spray bottle and the bottom watering, by the end of the day the mix should be fairly uniformly dampened, but I will keep checking to make sure. 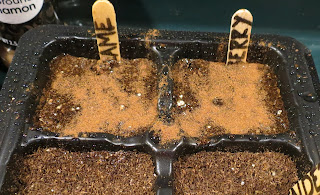 I finish off with a sprinkle of cinnamon powder.  Cinnamon is an anti-fungal agent and will stop the fuzzy white mold from growing on top.  This can be a problem with humidity domes.  It doesn't hurt the seedlings but neither does it make the grower feel good about their set up.  I prefer my plantings to be mold-free 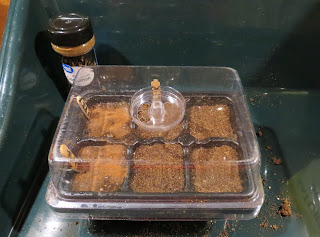 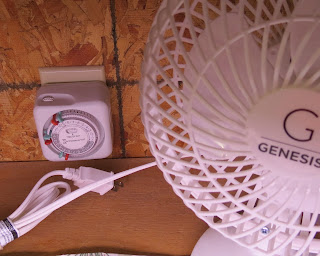 Next I set up my grow light and accessories.  The fan will not be used until the seedlings are transplanted, but I set it up anyway.  The outlet timer lets you set as many on-off sequences as you want.  I have used these inexpensive timers for years on house lamps and Christmas lights.  I've accumulated a lot of the little green and red triggers so I can set up many more sequences.  I start with three half hour increments and increase from there.

I have a second timer for the light and heat mat.  This power strip has two rows of outlets.  One is on the timer and the other is on constantly as long as the power strip is turned on.  I put the lights on the timed side and my heat mat on the constant side. 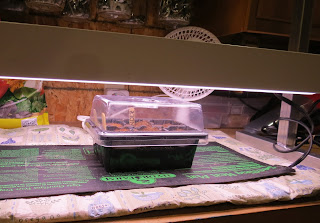 I place a vinyl tablecloth under everything to protect the workbench from water stains and the set-up is ready to go.  When the seedlings are separated out they will take up an entire flat of pots.  For the first couple of days I will monitor the moisture until I am sure the mix is soaked through.  The humidity dome will keep the surface damp, but when the seeds send down roots there needs to be enough moisture throughout the cell.  As soon as the first seeds begin to sprout I will turn off the heat mat and remove the dome.

Posted by SmartAlex at 11:21 AM No comments: