I've done it.  I've ordered my seeds.  And some of my supplies.  This is what I use any gift cards I get over Christmas for.  It offsets the cost, because gardening can be expensive.  I spend about $150 on seeds each year, $200+ on plants (annuals and some veggies/herbs), and an undetermined amount on supplies and infrastructure.  But hey, there are worse habits to "waste" money on.

One thing I love about garden planning season is the technology we have available now.  Most seed company websites have an option to create an account where you can store a wish list and look back at previous orders.  I have accounts for Johnny's, Burpee, Territorial and Stark Bros. just to name a few.  I keep a detailed Pinterest board on what I want to try and what I want to repeat.  I keep Amazon lists of supplies I buy each year, and also new products I don't want to lose track of in case I might want to try them later.  And lastly, I keep a detailed Excel spreadsheet of my layout and my shopping lists.  I can look back over past years and see what I spent and where I bought things.  I can prioritize my purchases to fit them into my budget.  And I can also add up the cost of a new thought and make a decision as to whether or not it is worth the cash layout. 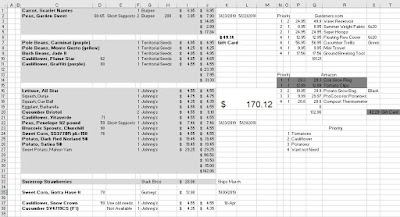 I also use the spreadsheets to design my layout and keep notes as to planting dates, yields and supports required.  I've learned to keep careful notes on what height a given variety of peas might get to.  I save these layouts from year to year, and I start a new one each summer late in the season when I know what errors I've made, what I'm missing that I didn't grow, and what I planted too much of or too early/late.  I start thinking about what I would have done differently.  It is also useful for tracking crop rotation from year to year. 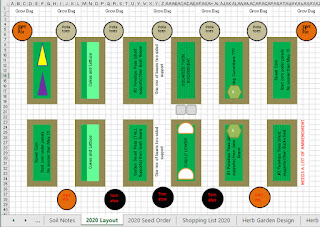 I always try to do a little something different each year.  Try some new varieties.  Grow something I haven't grown in awhile.  Try something brand new that I've never grown before.  Changing it up is what keeps things interesting.  I make a few goals, and see what happens.

For one thing, this year I am going to go back to pole beans.  I love the idea of pole beans because you can stand up while you're picking them, and that is so much better than crouching down.  But overall I prefer the bush varieties Blue Lake, Purple Queen and Gold Mine.  This year I am trying two new colored pole varieties, Carminat and Monte Gusto.   Not only can I stand up while picking, but they are yellow and purple which makes FINDING the beans so much easier.  They are perfect varieties for the old and myopic.

And I am also trying a new Bush variety.  Last year I added Jade to my list of veggies and they both outgrew and out produced the Blue Lake.  This year I am stepping it up one more notch and trying Jade II.

Sweet corn is a little more complicated.  I know I've said before to slap me if I ever consider growing sweet corn or melons because so many people can do it so much better, and all I have to do is go down to the farmstand and get what I want.  But in 2018 the farmstands failed on taste so last year I grew some of my favorite super sweet Gotta Have It corn with good results.  I'm trying again.

But I also am going heed another great gardening concept to not put all of my eggs in one basket.  I want to try a second variety of sweet corn at the same time.  This is where things get complicated.  With the modern super sweet varieties you can't just grow two different kinds of sweet corn without careful choice.  It matters what two varieties you expect to co-habitat because if super-sweet varieties cross pollinate with other types of corn, the quality of both is reduced.  And I'm not just talking about the hybridized saved seeds.  I'm talking first-generation-what-you-are-going-to-eat-this-year problems.  So you have to learn about super sweet varieties.  Gotta Have it is an (sh2) variety and you have to isolate it away from (se) and (su).  So I found SS3778R which is also an (sh2).

This will be the second year I have seriously tried to grow cauliflower.  Last year was a success and I learned a lot even if it seemed like the longest growing experiment of my life, beginning the fist of March with no serious results until early August.  That is DAILY attention to a plant for over 150 days in a row.  And then you get ONE veggie from it.

Honestly I never really like cauliflower all that much until I grew it.  My husband loves to have it ready in the fridge for a snack.  I didn't mind eating it if it were mixed in with some broccoli and perhaps smothered with cheese.  But growing several varieties really made me appreciate the subtle differences in the taste.  Now I am a cauliflower fan.  The yellow variety Flame Star was our favorite for its mild, sweet taste and attractive color.  It made the regular white varieties taste stronger and more challenging by comparison.  I will try Snow Crown again from old leftover seeds because it was the white variety that did the best in my growing conditions. Because we are both intrigued by veggies that are not the same color as what you get in the store I am trying Graffiti as well. 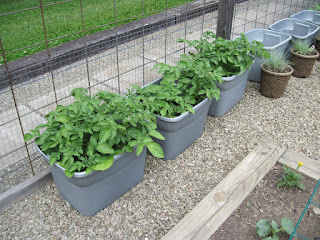 Now those potatoes in tubs look quite nice.  But they weren't.  The plants were very healthy, but not only was the overall yield the lowest I've had, the taste was just... off.  None of the potatoes were actually green which would suggest that they were not covered deeply enough, but they did have a faint soapy taste indicative of a high concentration of glycoalkaloids (natural toxins produced by the nightshade family).  It wasn't enough to make you sick, but it was enough to make me glad that I didn't have a lot of them.  Why is this?  The only thing I can think of is that the light colored plastic allowed too much sun in to the roots from all sides.  So this year I am going to try the popular method of grow bags.  You can go broke on grow bags.  But I found some on Amazon that are at the right price point.  If this works out well and the inexpensive bags don't hold up, I can spend more in the future. 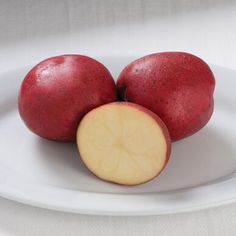 One variety I am going to try is the Dark Red Norland  I've grown the Norland variety many times with good results.  Last year I had some very dark red ones that I purchased at the grocery store.  When they got too sprouty, I planted the last of them in the garden, late, probably in July, and I got great results.  The tubers were beautiful which, when you are spending too much money to grow something you could buy much more cheaply, is a very important factor. 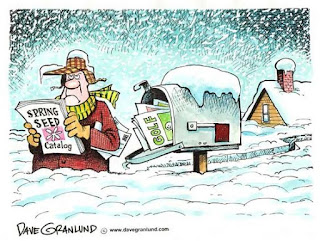