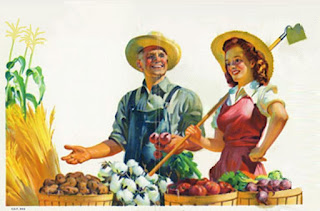 The harvest is on.  Overall it's been a good year, and the storage crops are beginning to come in.  This is my first year for Black Beans.  One of my "signature" dishes that I bring to gatherings is a fresh salsa and one of the ingredients is black beans.  Up until now, I have been able to make the entire thing from my garden with the exception of this crop.  I also enjoy making black beans and rice as a side dish.  My first year with this crop was a success.  I planted one bed (save the space for two pole bean tee pees) and the yield was good. 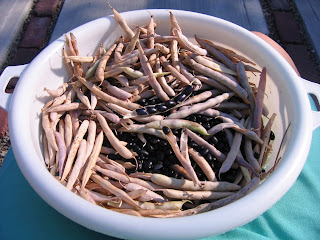 Now that the pods have dried on the vine, I've spent several evenings shelling them. This is easy as the dried husks are splitting open on their own.  Now and then a bean gets a little wild and sails off into the yard.  I retrieve as many as I can sorting through the grass on my hands and knees. About half way through the second bowl, sitting under the shade tree drinking wine, I thought "it would be really unfortunate right now to spill the beans". 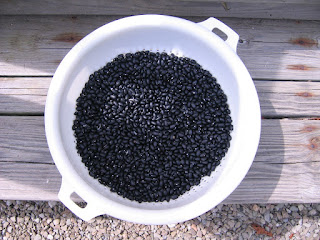 I leave them in the bowl and set them in the sun for a few more hours before putting them in jars.  It's very satisfying to see the volume grow... and none of that pesky canning or even blanching.  I have a cup of them soaking tonight and I'm going to cook them tomorrow and see how it turns out.  Tim is perplexed over the fact that the dried beans are being soaked.  Often the "logic" of gardening fails to impress him. 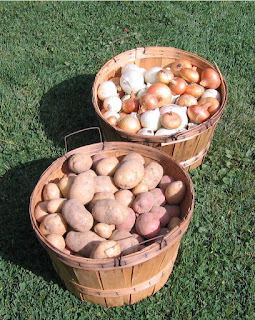 I also made out pretty well with the potatoes and onions.  I ended up with two of these half bushel baskets full of taters in the basement, as well as what we've been eating and the baby potatoes I have at ready reach in the kitchen.  Baby potatoes do not store well so must be used first.  My total crop was 50.5 pounds which is 9 pounds more than last year.  And that even with one row of Kennebecs failing miserably.  I still have one pot growing.
The potato plants had died back on their own and I left the spuds in the ground for several weeks since it has been nice and dry here.  I dug them last weekend.  Tim set up a lawn chair on the side walk and sat with a drink watching me crawl on my hands and knees along the potato hills digging by hand so I wouldn't damage any with a tool.  Every 5 or 10 minutes he would ask me if I was having fun yet, which I was because I love digging potatoes.  He then announced that he could drive down to Troyer Farms and buy a 50 pound bag for $10 and he didn't think my system was all that efficient for producing the same amount.  I'll have to admit he's right but at least I know these potatoes haven't been absorbing pesticides and weird chemical fertilizers all season and won't be treated to prevent them sprouting in the store.
The onions are much larger this year.  I don't keep track of the poundage since it isn't a crop we really depend on, but this year the basket is full, and last year it was not. 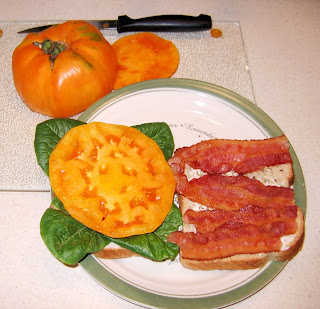 My Dr. Wyche's Yellow tomato plant is beginning to produce.  It is generally late for me, and this year I planted the seeds the first weekend of May so it's still playing catch up.  The plant is very impressive and appears intent on giving the Paul Robeson a run for his money for the "Most Productive" prize.  This variety has been a bit sluggish for me in years past, so this time I put it on the South end of the row where it would get the most sun and it sure seems to appreciate it.  There are loads of large, perfectly shaped slicers and I think no catfacing (knarly deformity and overall ugliness on the blossom end).  The plant is very healthy and has lost the fewest number of lower leaves of all the varieties I have this year.  It's still a beautiful plant.
Above is the first one picked, and it's gone way past "yellow" to a deep orange reminiscent of the Kellogg's Breakfast variety.  I stopped growing those because they were a bit too sweet for me and were he-Uge beefsteak size (I even won third place in the 2008 IDigmygarden forum online Biggest Tomato Contest with a KB).  Dr. Wyche is a really nice, thrifty, yellow/orange slicer and I'm very pleased with them.

So that's what's going on in the garden.  There is more to tell, but I won't blow it all on one long entry.  Tim has been working on a building project, and I have composting system reports (oh the anticipation LOL!)
Posted by SmartAlex at 7:38 PM 4 comments: 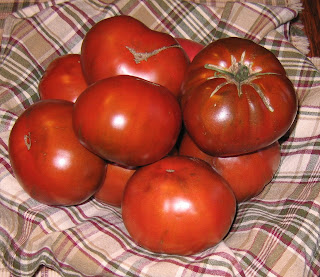 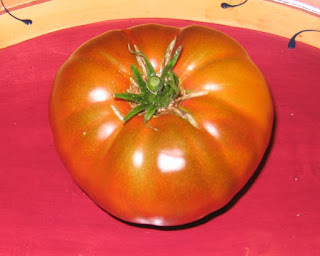 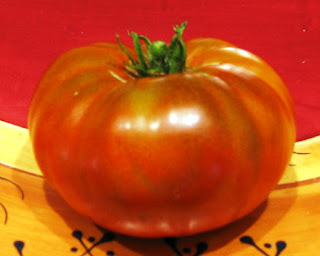 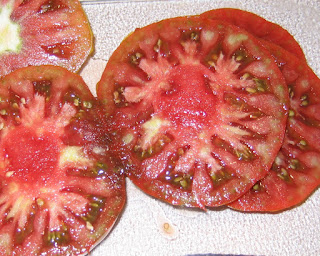 Like many heirloom varieties, the story is part of the intrigue.  Paul Robeson was a renaissance man.  Athlete, singer, political activist.  He was the first black All-American (1917-1918).  He graduated from Columbia Law School while playing in the NFL.  A celebrated actor in both America and England, he became a political activist and traveled the world acting and speaking.  He spent a great deal of time in the Soviet Union and was so beloved there that the tomato was named for him there before it was imported to, and gained popularity here in the states.
Posted by SmartAlex at 7:26 PM 1 comment: