The Ides of March

I suppose this could also be called Spring Cleaning Part II. I've been hankerin' to get the last of the old potatoes out of the basement. They did very well. I only bought a new bag from the store two weeks ago because I had run out of taters sizable enough to cut for home fries. Even though they were wrinkly and sprouty, they still made excellent mashed potatoes and I was using them for that. We also still have plenty of onions with a very low percentage being lost to sprouts. I am running low on peas, but am beginning to give away gallon bags of green beans! 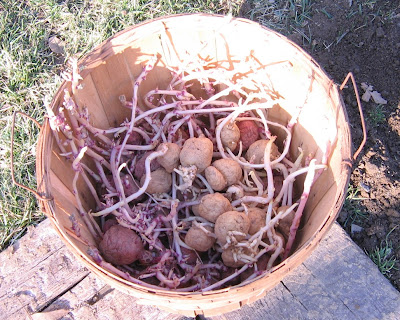 So, despite the fact that it is mid-March, and at least 2 months early for the "sensible" planting date for potatoes in our zone, if you had a pile of ugly, wrinkly, sprouty potatoes lurking about in your basement.... would you compost them? Or put them in the dirt and let them take their chances? 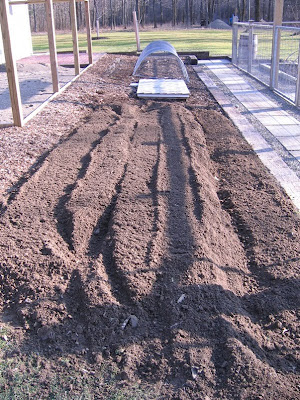 We are in the middle of a minimum of 2 weeks of 70 degree forecasts. The soil is warm and workable. When I arrived home from the office today, Tim had just finished tilling the potato bed. I ran right down to the basement and got those taters. I had just enough for one row, half white, half red. I chose the row closest to the side walk, so if the weather changes and they freeze or rot, I can easily pull them out and start over. 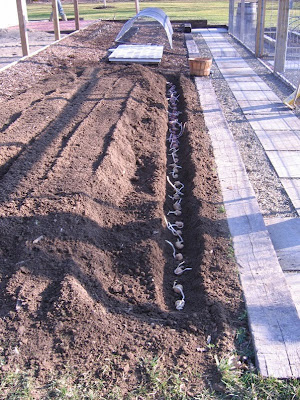 It's a beautiful thing isn't it?

I also had two packets of Survivor peas left over from previous planting seasons. So, you guessed it, they went in too. The two rows planted today comprise half of my planned pea planting. I will be ordering more to plant by Good Friday. My mother recalls a year back in the 1960s ("the year Mom and Dad went on vacation"... her father was a dairy farmer, so there was only one vacation in family history to recon with!) that she planted peas on March 5th and got a wonderful crop.

There were a few odds and ends or potatoes left that didn't fit in the row. Those went into two 5 gallon pots on the patio. Those will be easy to save from bad weather should it occur, and they will be ready to pick before the end of potato planting season so I can use my next batch of leftovers to fill them for a second crop.

The robins are back a whole month early, and all the bulbs are up but not blooming. If you weren't watching the calendar, you would swear this was April and not March. We have had a lot of warm dry weather so we are getting a head start on yard work. 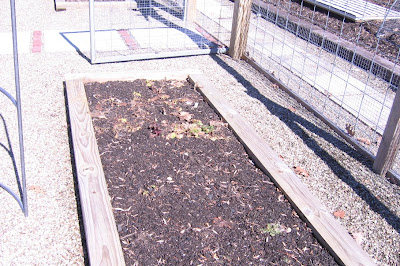 I cleaned the old lettuce and remainder of last fall's carrots out and weeded my beds so they are ready for planting. 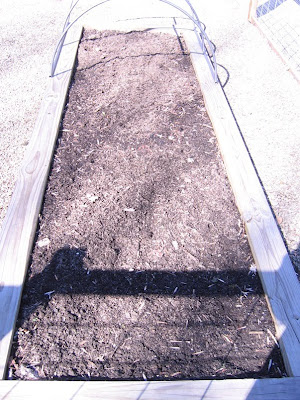 I trimmed the dead foliage and runners from the strawberry bed and pulled unwanted plant starts between the rows. 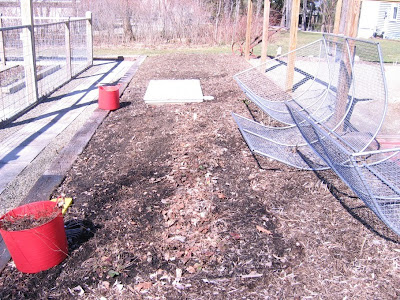 I raked all the mulch about to freshen it up and to cover the tender new shoots to protect them from frost. 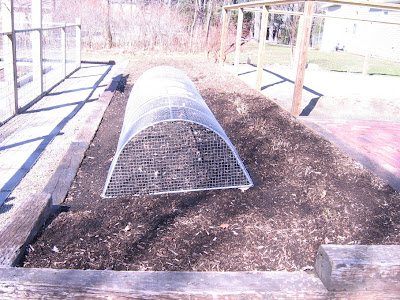 We lost some tops out of dying ash in the shrubby strip beside the garden so we cleaned the tops out and cut the remaining trunks. 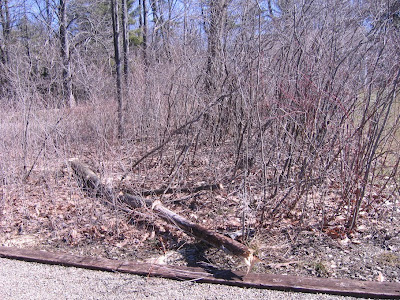 In a lawn surrounded by aging and dying ash trees, that was only the beginning of our game of pick-up-sticks. We took many loads of branches, limbs and brush back to the burn pile. 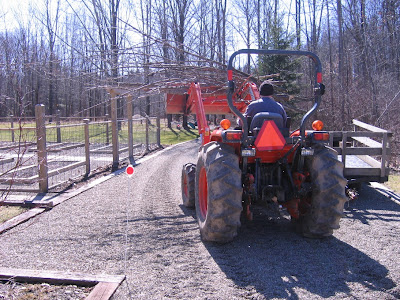 Speaking of tree projects. There was a strip of trees between the neighbor's drive and our side yard which have always stood in a swampy area. They have been were dying at an alarming rate and losing large pieces. There are few things more startling than sitting in your lawn on a sunny summer Sunday and hearing a huge oak branch thicker than your leg come crashing down without provocation... narrowly missing the garage eaves. 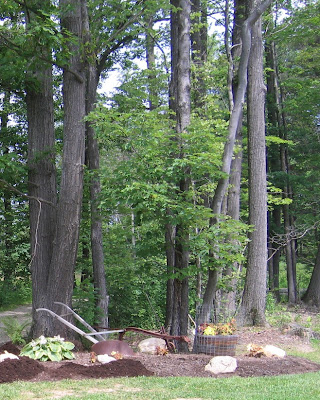 The neighbors had the trees removed, and took the opportunity to run the city water line in from the curb box, so this neat and tidy garden bed now looks like a muddy waste land. 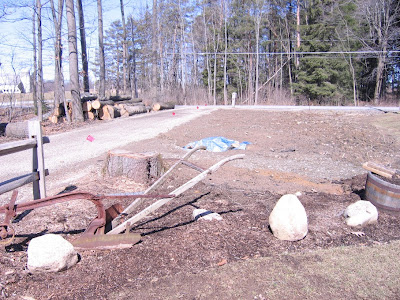 This was my landscape bed, but everything to the left of the whisky barrel was on their land. So the plow and the rocks need to find a new home. The Hosta plant next to the fence is frozen solid in the ground so that will have to wait.
It is hard to describe the havoc that has taken place in that little strip of land over the last couple of months. 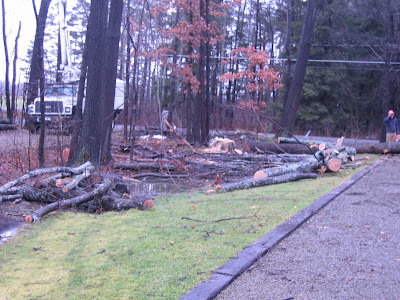 You can see how wet it is, so everything has taken place in the worst kind of mud. 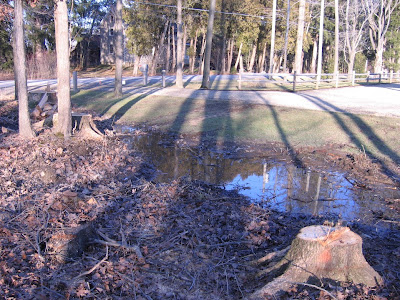 After the trees were cut, Tim and neighbor Mike managed to restore some order, and the tree service returned to chip most of the tops. 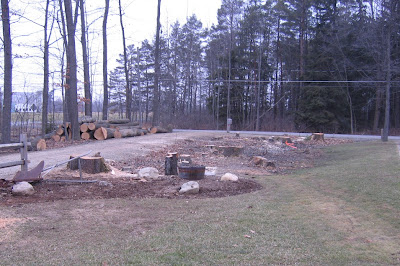 Then the water line went in. It would have been impossible to trench through all those roots, so the stumps were pulled and hauled away, and the line dug to a meter pit closer to the house. 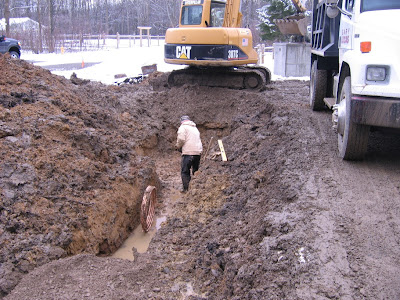 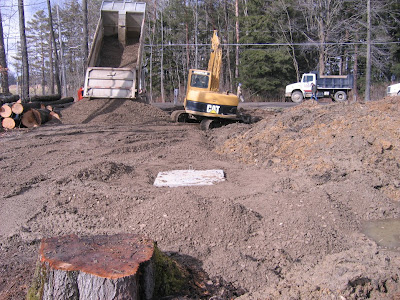 Many many loads of gravel were brought in and much of the nasty clay was removed to improve the drainage and restore some decent ground. 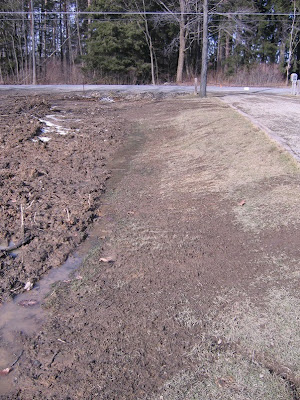 The property line runs right down this trench, and you can see that Tim has done his best to restore his lawn to pre-war-zone tidiness. We have several stacks of large red oak logs that will be milled into useful lumber, and neighbor Mike has several years worth of firewood to cut up. 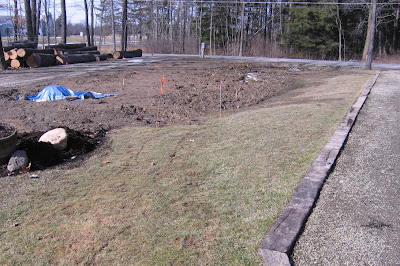 When the ground firms up, a proper french drain will be dug down this line and the neighbors will be able to work on putting in a lawn and restoring the edge of their driveway. Then some shade trees will be planted, and before you know it peace and beauty will return. But as you can imagine... everyone is tired of sticks in the lawn.
Posted by SmartAlex at 7:39 PM 2 comments: