As it turned out, there were two meals left in the pea patch. They are now in the freezer.  In fact, had I left the rows in I may have gotten two more as the cool summer is allowing them to keep producing.  But I had plans for that bed so out they came.

The plan is Solarization.  I have bacterial and fungal issues in almost every bed.  The only solution I know of for that, save replacing the soil, is solarization.  Soil solarization is a non-chemical method for controlling soilborne pests using high temperatures produced by capturing radiant energy from the sun. 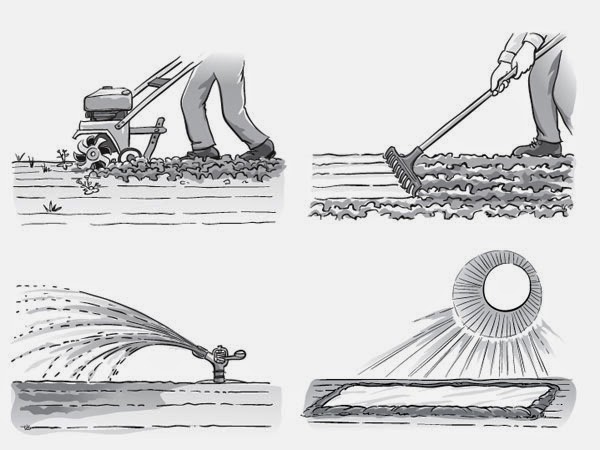 In order to do this, you must put plastic over the area for 4 to 6 weeks during the hottest time if the year.  That time is fading fast.  UC Davis has a good article on soil solarization for gardens.  Link,  I have two greenhouse panels that will work just great.  I know they trap heat because the lid of the cold frame is made of them and it gets hot enough in there to melt plastic pots! 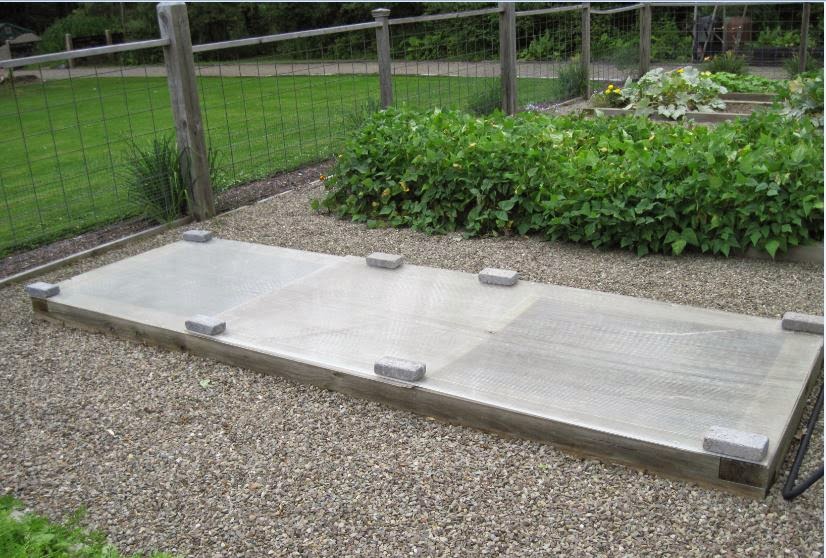 So I removed the peas, raked the soil, gave it a good soaking and covered it up.  I'll let that cook until we put the garden away in the fall and we'll see if it helps next year.  I have tweaked my garden rotation to get all the beds solarized for half a season within the next two years.

I saw that phrase, "the mid-summer slump" on another garden blog and thought is was a good description of my feelings this week.  My garden is far from done, but it sure looks like heck.  This is when you start to see how well you chose your varieties.  Careful selection of resistant hybrids can mean the difference between This:

I am very happy with the Dunja variety from Johnny's Seeds which is said to be resistant to powdery mildew, papaya ringspot virus, watermelon mosaic virus, and zucchini yellow mosaic virus.  So far, so good.  Just a little mildew but not too bad.  Tis the season.  Tis also the season for everything else to begin to succumb to old age and disease. 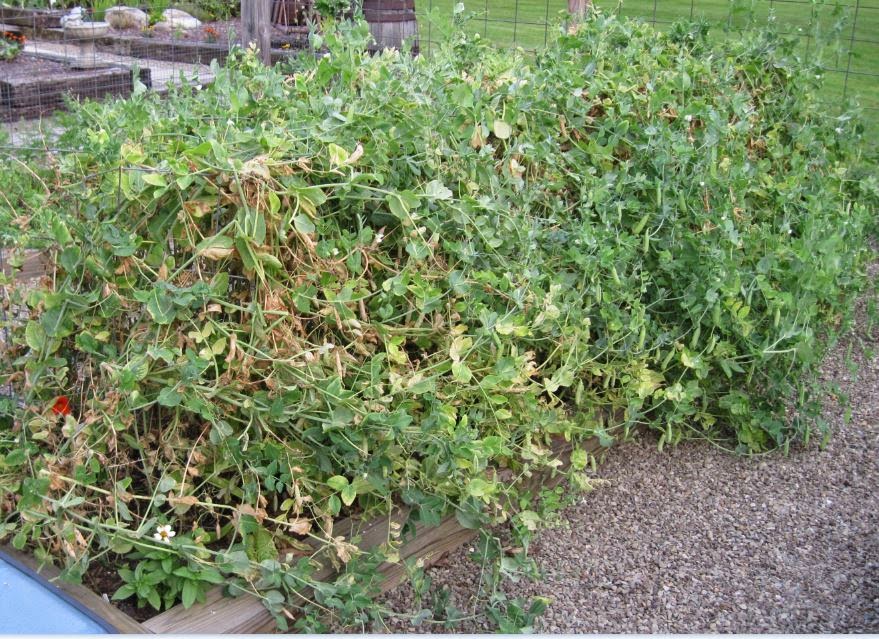 The last row of peas is tumbled down and ready to be pulled.  I think there is one more meal left in there. 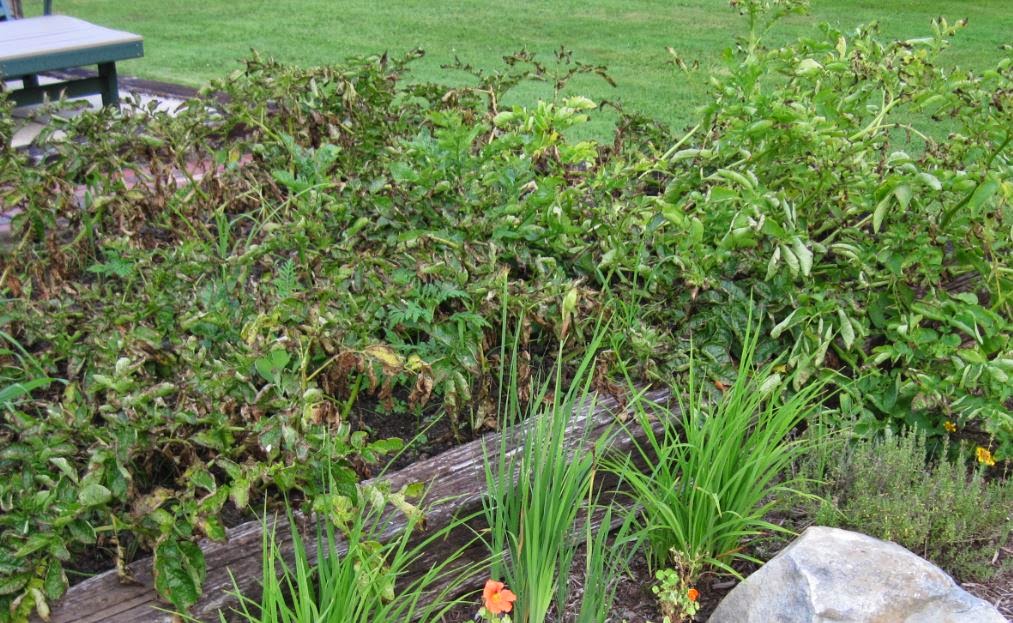 The potato patch is blighting out and dying back, but that won't affect the plentiful tubers beneath the soil. 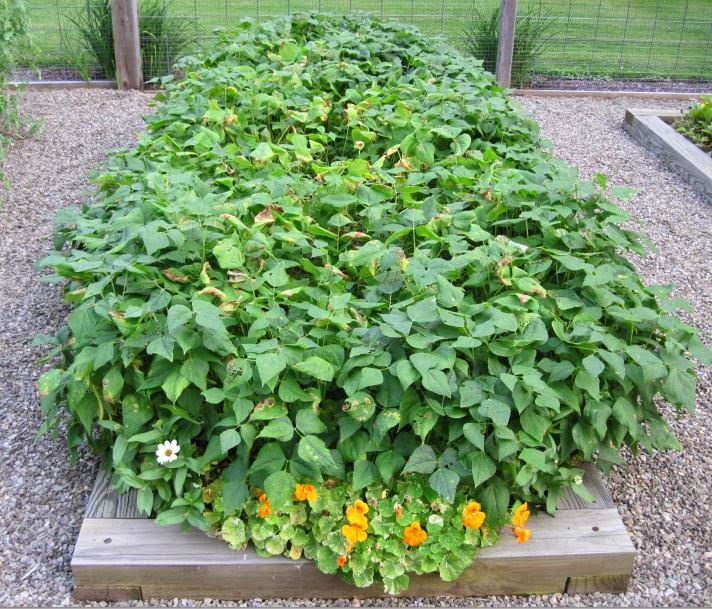 The Black Beans are beginning to lay over and split down the middle.  A few of them are a bit chewed up from Japanese Beetles.  Not pretty to look at like the lush jungle of June. 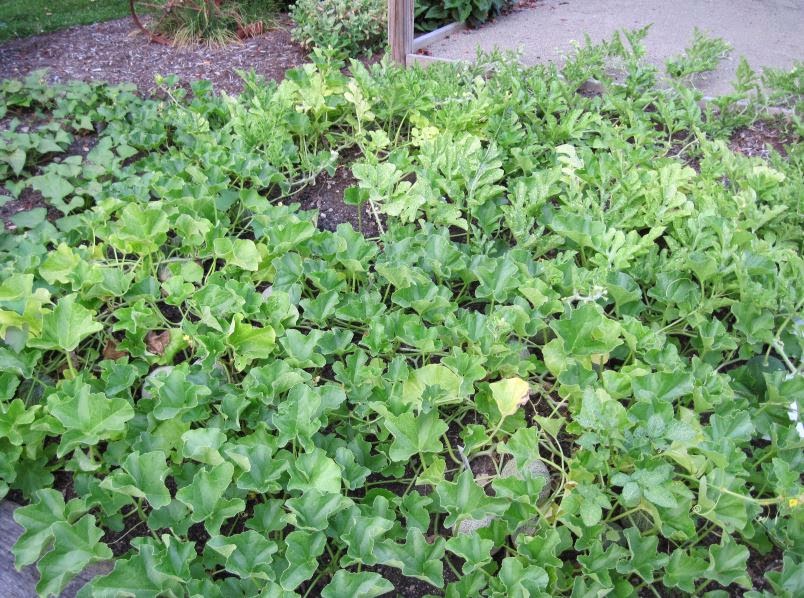 The Melon Patch has stopped blooming and is showing a little yellow around the edges.  That's OK.  I'll settle for two dozen cantaloupe!  I'm anxious for them to begin ripening.  I have at least half a dozen watermelons too.

Elsewhere in the garden.  The first row of cucumbers is fighting wilt as the second row just begins to bloom.  One planting of bush beans is fighting root rot which is getting the seedlings just as they make it through the soil.  About a third are surviving.  I have planted more in another bed.

Despite the challenges and the circle of life drama going on, we still have plenty to eat.  Tonight we had beans, carrots and cucumbers.  I have just begun picking cherry tomatoes and I am anxiously awaiting the ripening of slicing tomatoes and eggplants.  The onions and garlic are ready to pull.  I have enough zucchini to make a batch of bread for the freezer.  All is well after all.

Posted by SmartAlex at 8:13 PM No comments:

I decided today I would make some potato salad out of the new potatoes with the perfect, flawless skin.  All I have to do is reach into the soil and pull out as many large potatoes as I want.  They're HUGE.  Bigger than my fist. 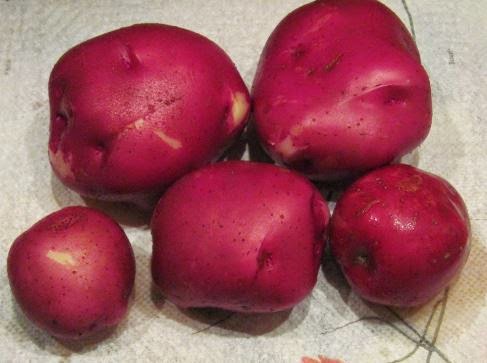 Of course this got me feeling guilty about the 7 or 8 pounds of wrinkly sprouty ones I still have from last year.  We just don't use a lot of them in the summer.  But they can't wait much longer,,,,  So I decided to try freezing some. 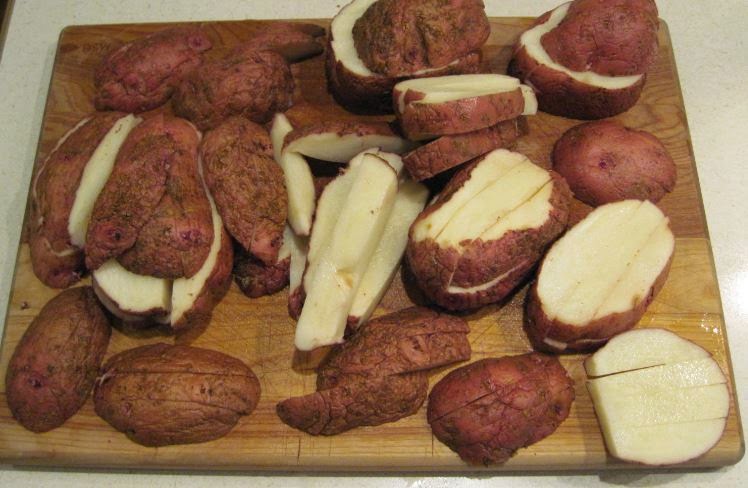 I removed the sprouts and gave them a good scrub.  If you are freezing it is best to have the cutting done before you freeze so you are not handling the thawed product anymore than necessary.  I decided on steak fries although home fries for breakfast would work well too. 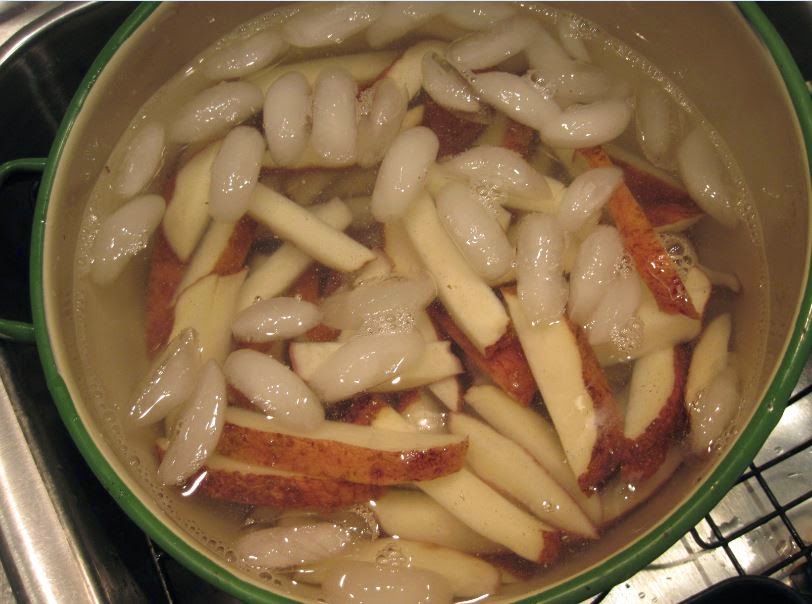 I blanched them for a little over a minute and then put them right away into an ice bath. 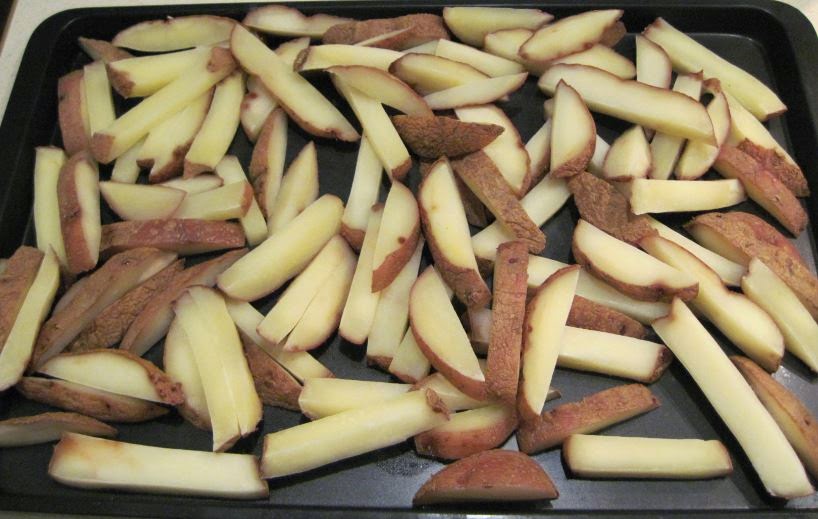 After they were cool I drained them and spread them on a baking sheet and put them in the freezer to flash freeze.  I now have a gallon bag of steak fries ready to use.  I'm sure, like most things, the sooner I use them the better they will turn out. 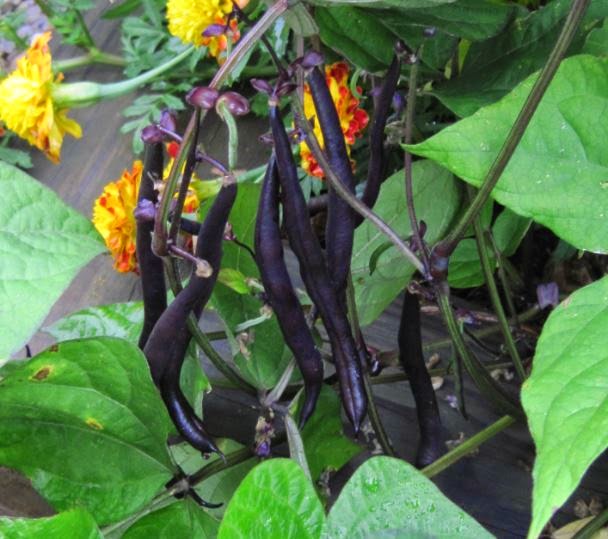 There are a lot of other things ready to eat in the garden.  The bush beans are ready to pick which is good because I've just about had enough of shelling peas.  The pea plants just won't quit.  I was expecting to have them all pulled out a week or two ago, but the last three rows just keep producing.   I have plenty in the freezer and we're eating them as often as we like. 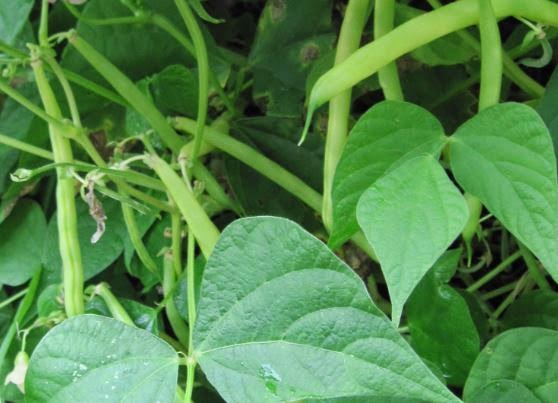 I will pull at least one row of peas by the end of this week and put in three more rows of bush beans. 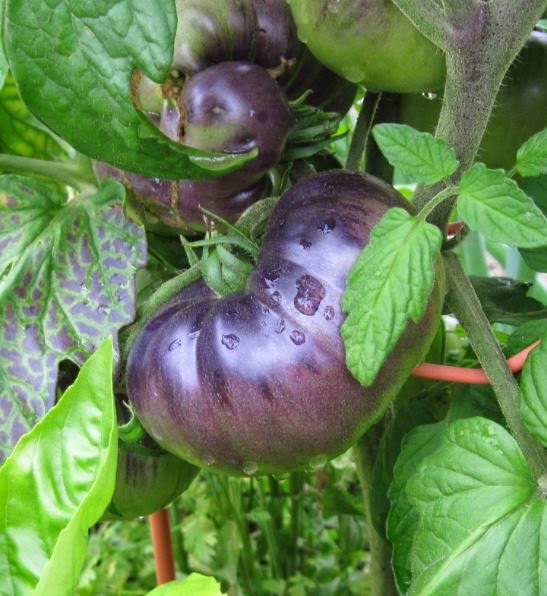 The Blue Beauty tomato is showing off it's unique coloring.  It is way more than blue.  The deep purple shoulders are spreading so that as it ripens the entire fruit is becoming deep purple. 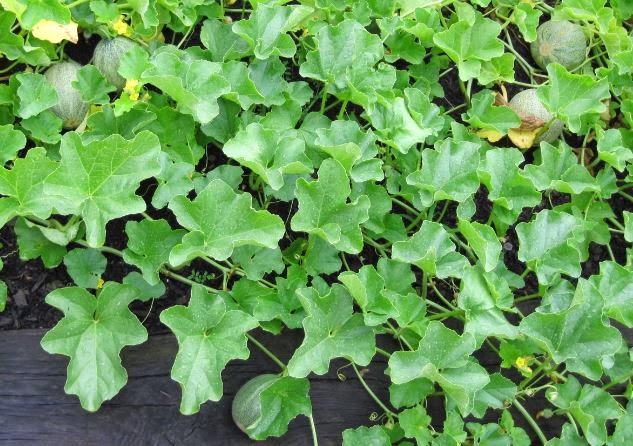 We have lots of cantaloupes growing, 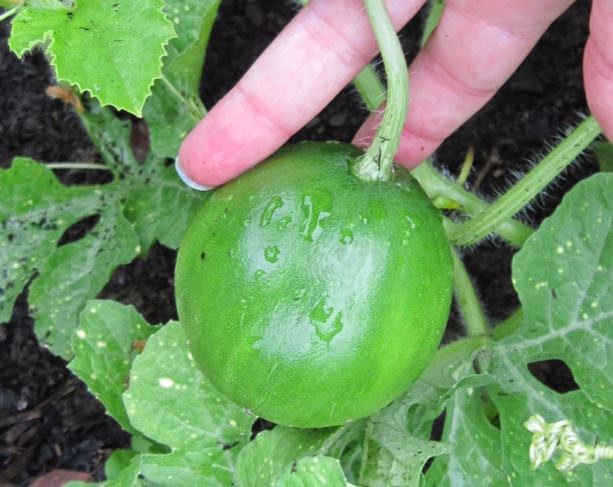 And I have seen at least half a dozen watermelon babies.  This one is masquerading as a lime. 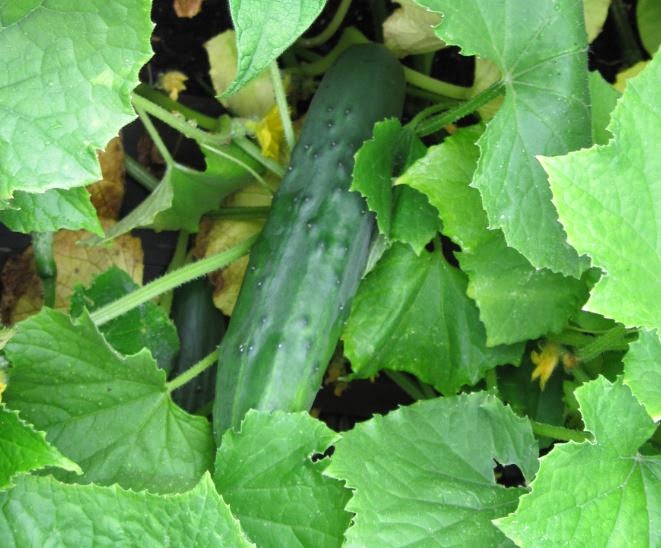 We have been enjoying the early cucumbers one at a time but soon will have enough ripe at ones to make pickles. 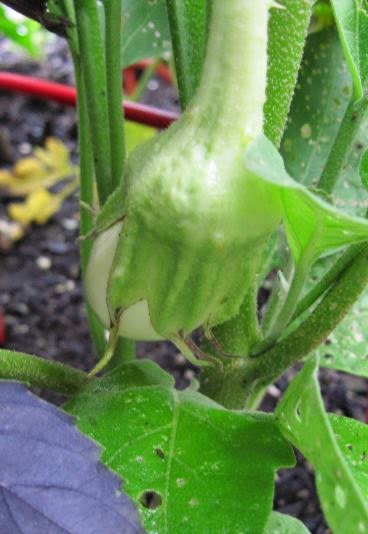 I finally have eggplants making a show.  Each plant has one set.  A couple set in June but then dropped off in the cool damp weather.  It will be well into August before I have any eggplants ready.

Posted by SmartAlex at 5:23 PM No comments:

Too Good to be True? 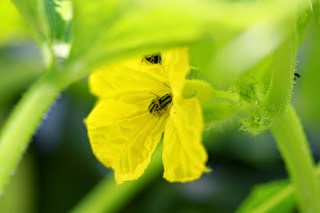 Last year's incursion of cucumber beetles was an absolute trial on my patience.  This year I've seen exactly three.  Three.  It was the third week of June on the cantaloupe blossoms.  I killed them.  And that was all.  I haven't seen one since.

To what do we owe this much needed breather?  This year the asparagus beetles were a challenge, but the other pests are in abeyance.  Was it the extreme hard winter?  Years of diligent destruction?  Some magical combination of companion planting and soil management?  Was it the addition of beneficial nematodes and Milky Spore?  All of the above?

Posted by SmartAlex at 6:21 PM No comments:

A Cluster of Cantaloupes 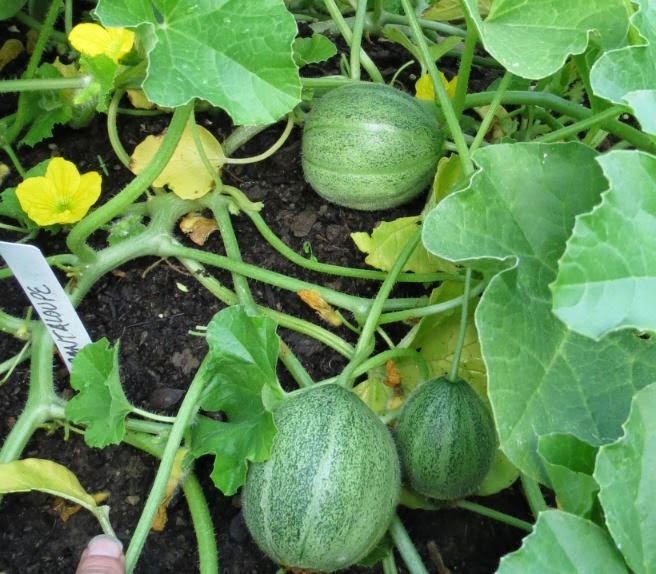 The melon patch is looking like a success.  I've found a cluster o' cantaloupes
And the watermelon have begun to bloom.  We're having a pretty good growing year.
What a difference a year makes:

We've had a very wet May and June and July is following suit.  There have been just enough hot sunny days.  So far no major pest infestations but I have begun to find Japanese Beetles.  The tidy lushness of June is beginning to give way to general dishevelment.

But to compensate for the jungleness, we are beginning to enjoy our harvest.  Peas are in full swing and I've already pulled one row.  The lettuce is bolting and will soon make way for more cucumbers and bush beans.  Carrots are ready to begin and we are teetering on the brink of a zucchini avalanche.

Posted by SmartAlex at 9:18 PM No comments: