Too Hot to Blog

We just got past a three day stretch of 90+ weather.  Sunday: 94*  Monday: 92* Tuesday: 94* again.  With all of the gravel in and around the garden the temperatures reached 110 a few times.  (That's 43*C for those of you on the metric system)  I watered well Monday morning and kept checking throughout the day for the few transplants that needed rescue.  I did a lot of my checking from the shade of the maple tree, and yes, we did finally turn the air on in the house because it was also too hot to sleep. Today we are getting a much needed rain and relief from the heat and humidity.

Pretty soon there is going to be a lot of food out there....
Posted by SmartAlex at 4:09 PM No comments:

So you wanna be a bean stalk when you grow up


This year my Fordhook BUSH Lima Beans insist on sending out extremely long, climby stems.  Some almost four feet long  Last year they were tall and bushy and could have used support but they didn't do this...

One thing I've discovered when growing plants is that if you deny them the chance to grow in the way their passion is taking them - they will quit on you.  There is only so much pruning and discipline you can inflict on a vegetable.  I've had tomato plants just up and die on me because I was trying to keep them to a certain size and space.  And I'm not talking about poor production or pitiful looking plants, I'm talking about Dead.

You can have years of experience, months of planning and hours of work and suddenly you are faced with a circumstance that requires a lateral move.  So after observing the problem for a few days, I decided I was going to have to hurry up and figure out a tall support for them.  Because this could be just the beginning.  Who knows what they have planned.

#1 I have a plan for almost all of my existing supports so I don't have anything tall to span the length of the bed and #2 I have some grids in there already that I think may damage the plants if I removed them at this point.  So I rummaged around and found one beat up T-post and a bean pole.  I could have used two bean poles, but the T-post is sturdier so at least one end of this apparatus is going to hold.  If the bean pole doesn't, I can go buy another T-post and replace it without much trouble.  I used a post pounder to set it so its in there pretty good

Then I strung some heavy jute twine across from post to pole.  But I know that climbing beans feel around for vertical surfaces, not horizontal ones so I added some short pieces of twine tied vertically.  The twine will need to be tightened as it stretches but this will be easy to do because the knots are easily accessible and quick release.

They could just send up some shoots and look a little raggedy or this could be the start of a wall o'beans.  I don't really know what to expect.

Posted by SmartAlex at 8:00 AM No comments:

To Pick or Not To Pick - That is the Question

Sometimes I think that the anticipation is more enjoyable than the harvest.  Its a close run thing.  I am at the point of having to harvest and process things every day.  But the first of anything is always the best.  The first peas, the new potatoes, the first broccoli salad, the first cole slaw. 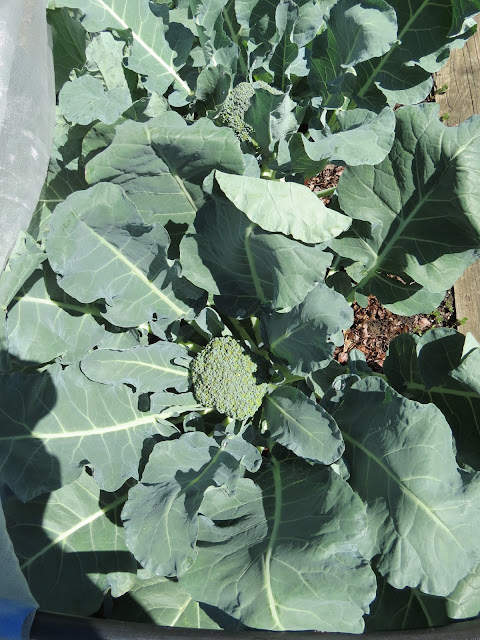 And then there are things that we are chomping at the bit for and they're still a long way off
Like Cucumbers.... 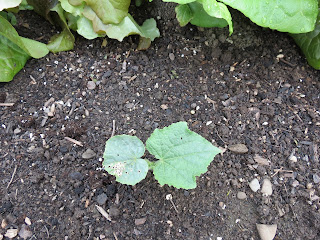 Posted by SmartAlex at 5:37 PM No comments:

Well that was my morning stroll.  That's how I make my list for everything that needs to be done that day.  The things that bother me most go on the to do list and off I go....
Posted by SmartAlex at 4:34 PM No comments:

My husband asked me awhile back why I was taking up a whole raised bed just to set potato grow bags on when they could just as well be on the gravel along the fence like last year. 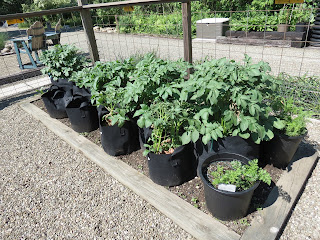 This is why:
That bed, and two two others, were completely over run by purslane last year.  Practically knee deep in it in between the corn stalks which is pretty impressive for a ground hugging plant.  So I am blocking it out.  Covering it up.  And weeding the edges.  That'll fix it!  Or at least its one less bed to worry about this year.
I just go over it with a claw ever week or two and uproot all of those seedlings before they get big enough to require pulling 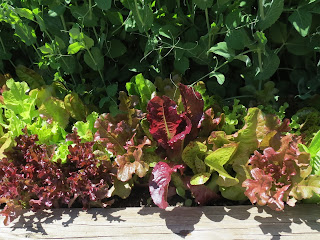 Less weeding is also why I use up all my old lettuce seed as ground cover.
No room for weeds in there! 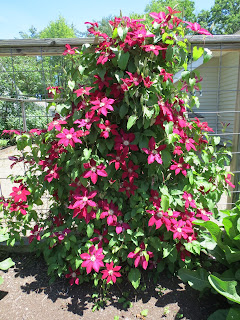 Posted by SmartAlex at 5:34 PM No comments: 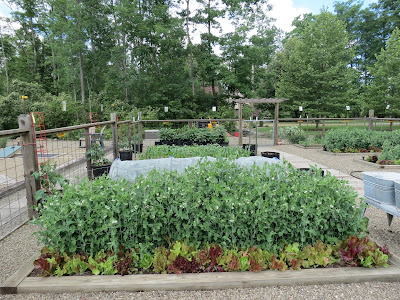 The whole point of keeping a garden blog is comparing past years to this year.  Compared to June 15th last year, some things are right on track and some things are way ahead.  My Garden last year on June 15th.  I can't believe how far ahead the potatoes are.  Of course this is because they shipped earlier this year and I was able to get them planted much earlier. 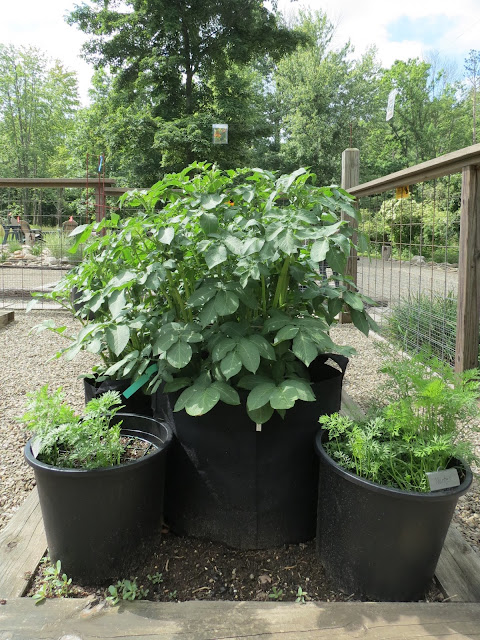 The potatoes are already at their mature height and beginning to flower.
The Lima Beans are WAY ahead.
And the pole beans are already trying to climb.  Last year the first batch I planted around the conduit poles sat there with a stupid look on their beany faces for two MONTHS and never seriously tried to climb so I pulled them out the end of July and planted a new batch on the trellises.  This year I began with trellis.  I can learn from my mistakes.
The sweet corn is looking awesome.  This early variety is new to me this year and should be producing in another 5 weeks.  I've strung up the first layer of support strings. 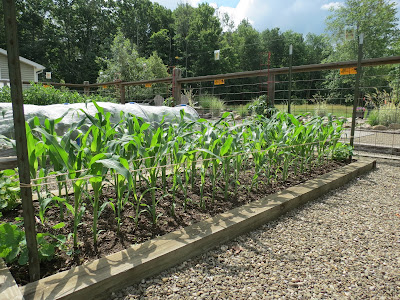 Same as last year I have a baby broccoli,  Last year I thought the first one was a Vitaverde cauliflower but it later turned out to be a fill in broccoli from the nursery.
This is Gypsy and I bought the transplants in early May. 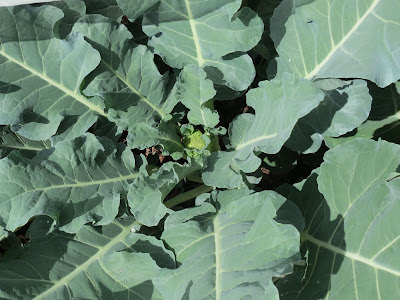 The cabbage is ahead of last year because I purchased and planted it a couple about four weeks earlier. 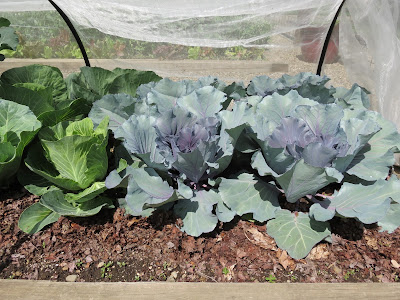 The cabbages are forming heads. 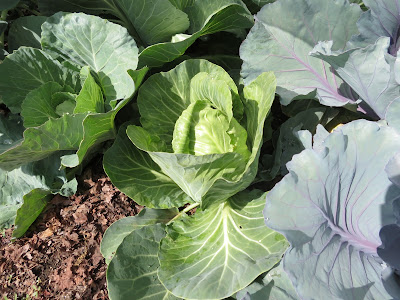 Last year I know I planted Golden Acre and Red Acre.  This year the tags were generic.  I hate that.
I do have seeds for Golden Acre and Violaceo di Verona.  I am thinking of planting a batch for fall. 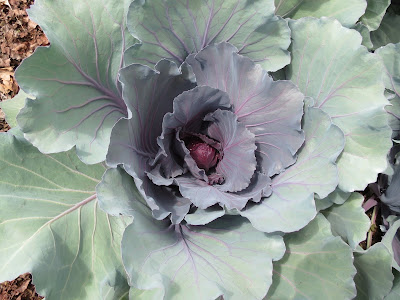 The cauliflower is all looking outstanding, similar to last year. 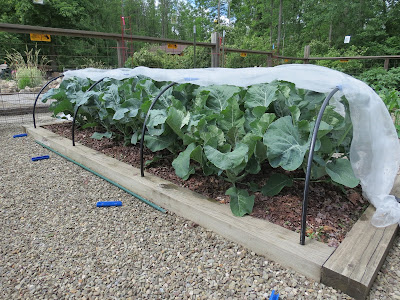 In a few days I should be picking peas. 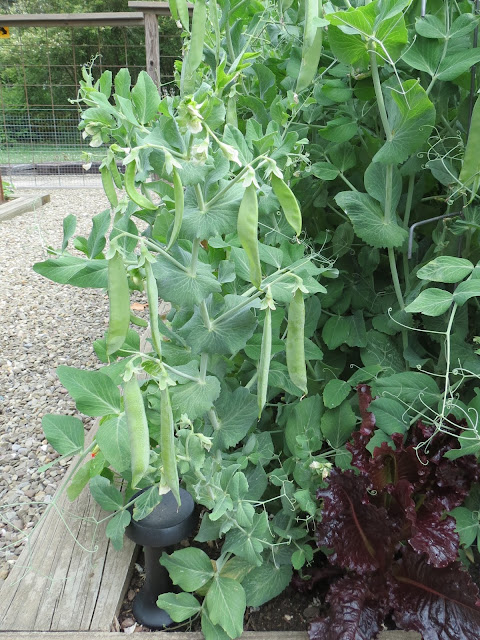 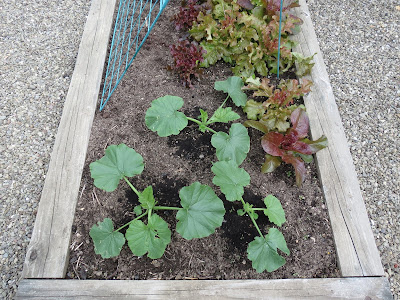 The summer squash are doing the same as last year.  These are Cue Ball plants 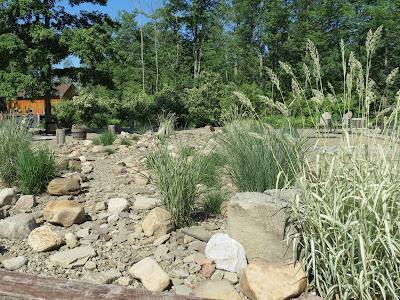 When I'm done picking and poking around my garden.  Weeding, fertilizing, pruning.  Scolding, coaxing and admiring.  I sit in the chaise, put my feet up, and watch the dragon flies patrol the dry creek bed.

Posted by SmartAlex at 6:01 PM No comments: