Today is my favorite date of the holiday season.  We have had a very mild early winter enabling me to poke around outside and take sunny walks most days.    Yesterday my husband brought his father's sled out of storage and I made a wreath from the landscape.  Now I am headed out to have lunch with two of my former co-workers. 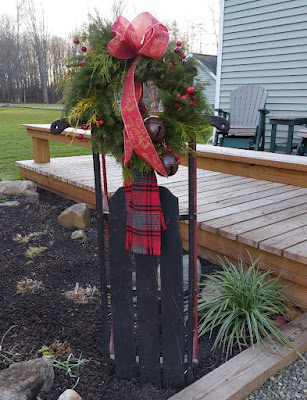 A Happy Winter Solstice and a Good Yule to all of you.

What do gardeners do all winter?  Think about gardening.  Wow, did that wind blow last night!  It flipped one of our heavy Amish patio chairs again.  No major trees down though, just a few branches.  The sun is peaking through today so I had to go and have a little garden walkabout.  Everything was too frozen to dig in though so I just wandered around. 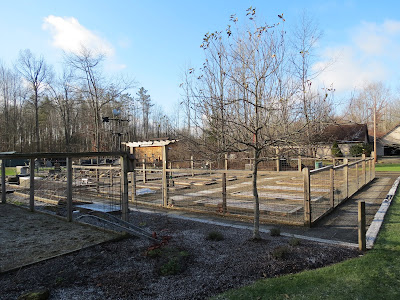 So much potential there. 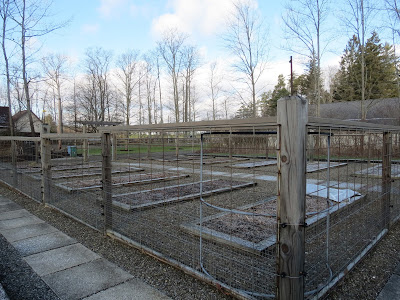 I still have lettuce growing under this heavy frost cloth!  Its a record!!!  We have eaten lettuce on Midwinter before, but it was picked weeks before.  Usually we lose the lettuce around the third week of November.  Yes, it has been mild, (when it isn't snowing) but we've had at least one night at 24 degrees F and that would usually do it in.  I think the difference is that the frost cloth is close to the plants rather than being up on the frame.  The bricks were frozen down this morning but... 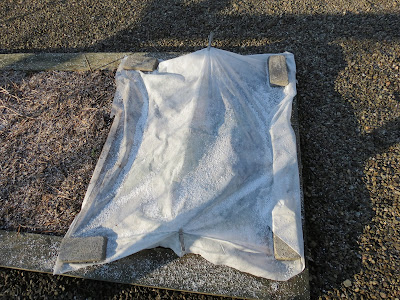 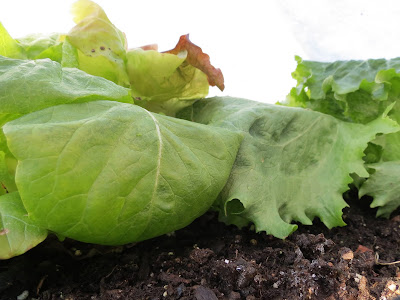 I found some stray packets of tomato seeds in the basement with my seed starting gear.  I brought them out to the garden shed where my seed collection spends each winter going through its cold stratification.  The packets in the pocket on the left came in the mail this week.  They are celosia, snapdragons and marigolds.  Rather than scouring nurseries all over the countryside for the exact varieties I want I am going to try starting them myself this year.
Today I checked on the dahlia tubers I have stored in the bulkhead.  I opened up each box and felt for moisture.  The vermiculite felt just right.
I uncovered some of the tubers and gave them a pinch.  They are not drying out at all and there are no signs of mold or other yuck.  I am really looking forward to dahlia season this year.
So what am I doing to keep myself occupied in my first year of retirement?  Some days I am very busy and some days I sit in front of the computer.  My husband says he doesn't know how someone can sit at a computer that long... years of practice my friend,  Years!  only now its not forced.
Well, as far as what else has been going on, we got our vacuum cleaner fixed.  Its a Rainbow and its 32 years old.  The motor died, but we were lucky to get a new motor for it for about a third of the cost of a reconditioned unit.  We still have all the accessories and didn't need an upgrade.  We still have a vacuum repair place here in town.  While waiting for the vac to return, I used the carpet shampooer and also scrubbed  the grout lines in the kitchen.  I tried the new motor out yesterday and Wow!  Does it clean!  I think the old one was fairly worn out for awhile before it quit.
I remember one year when we were first dating my now husband got me jewelry for Christmas but initially thought he would get me a vacuum cleaner. We joked about that for years. Now, after 22 years I am super excited to get a new vacuum motor for Christmas!
Also, during my computer time - I ordered a bunch of seeds - natch.  I've only received one seed catalog in the mail so far. (!)  Last year they started arriving right after Thanksgiving.  But that didn't slow me down.  I am waiting for Longfield Gardens spring bulb ordering to open on the 15th. I want to get some Non-Stop Begonias for the whiskey barrel that doesn't get enough sun.  I have my Etsy cart full of Ranunculus corms.  That will be a new planting endeavor for me.
I spend a lot of time learning on Youtube and such.  Here are my favorite channels:
Garden Answer
The Impatient Gardener
Susan's in the Garden
Growing a Greener World
Charles Dowding No Dig Gardening
Not gardening, but also super interesting if you like historical living:  Townsends
Their latest video is about Gardening in the 18th Century
My favorite Podcast:  The Joe Gardener Show
Bill Alexander (he of the $64 Tomato) has a new book coming out in June.  I have it preordered and am counting the days.
So that's about it.  Its a beautiful sunny day out.  Still a bit windy.  If only the wind would quit I'd light a campfire and go sit outside with some hot cocoa.  When I came in from my walkabout, the sun was shining in the porch... 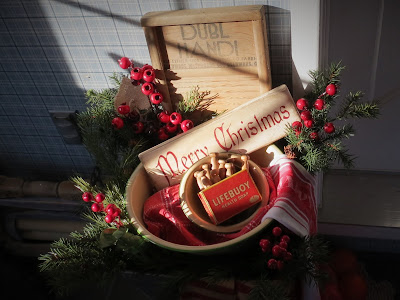 Posted by SmartAlex at 11:10 AM No comments: