My Annual Garden of Good and Evil post.  It seems every year in July I end up with a post which pretty much sums up how the garden is going for the year.  July is the tell tale time.  May's busy planting season and the June lull where every thing is supposed to grow are over.  In July we begin to reap the benefits and form plans for next year. 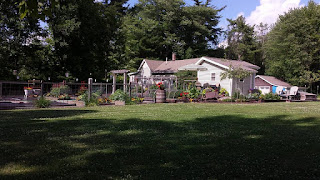 Here are some of my Good and Evil posts from years past.
The Good The Bad and The Ugly
The Killing Spree
Mid Summer Slump
The Empty Hod


Why is this wrong you ask?  I had planned to put a geranium in this spot.  Early in the year, at the "fancy" greenhouse, I spotted these spreading geraniums.  They were absolutely gorgeous.  I bought the nicest one and brought it home and I don't think it has put out a single new leaf all year.  It hasn't spread one bit.  It still looks nice, and it likes where it has been planted, but being in a 12" basket it was almost 3 times as expensive than a single 4" potted geranium.  And at this point in the year, it doesn't look any better than the regular geraniums.  So I won't be buying another one next year.

To be fair, it is right next to my favorite thing for this year which is my combination patio pots.  I just love the color and texture of these.  The old fashioned geranium pales in comparison. 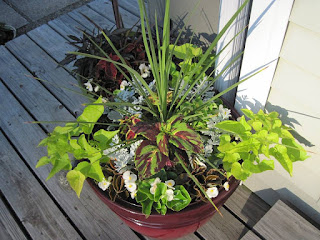 Which brings us to a "Right".  Which is Coleus.  Generally, I consider myself a vegetable gardener.  But I grew up with annual bedding plants and they are family to me.  I visit the greenhouses each spring and check tags and remember the words I grew up reading: Figaro Dahlia, Super Elfin Impatiens, Daddy Mix Petunia, Verbena, Ageratum.  Not a lot has changed.

Over the years I've binged on Pansies, Zinnias, Calibrocha, Sweet Peas, Nasturtiums, Geraniums and Lantana to name just a few.  This year it's Coleus.  It began when I decided that I am tired of trying to choose a shade of pink.  Well... I don't use pink very often.  So I am tired of trying to choose something new in the red/orange/yellow family.  A person can only take so many geraniums and marigolds.  So this year I decided to choose foliage not flowers. Enter;  the Coleus.


When I was assembling these in my mind I decided to go with contrast.. I put lime/chartreuse in the burgundy pot, and burgundy in the chartreuse pot. I had to buy a bunch of packs of Coleus to get enough of the right colors so I had extra to plant everywhere else. It helped that my friend was selling red spikes in her greenhouse. It wouldn't have been right using green spikes in both. Then, about a week after I'd initially planted the pots, I found the really big spikes. I passed them up initially, but I actually dreamt about them so I went back the next day for them. I used the baby spikes in another planting.

This has been a good year for Cucumbers.  I have three varieties planted in this bed.  Mid-May when I was worrying that my seedlings would never grow, I bought a pack of my old standby Marketmore '76 from the greenhouse, and those are producing great.  Beside them are 4 "Socrates" which are a seedless self-pollinating (or non-pollinating really) variety which is supposed to be very productive.  The cukes are about the length of a bun-length hot dog and twice as thick.  The skin is spineless and very easy to peel.  And they are nice sweet cucumbers.  We're really enjoying them.

At the far end of the bed are the SV4719CS (F1) which are supposed to be highly disease resistant.
I have a second row of those planted a few weeks behind.  The first 4 plants are producing and they are a good cucumber a little smaller than the Marketmore.


The Dunja zucchini was a little slow to start but is doing awesome now.  This is a great variety.  The leaves are HUGE this year.  It looks like a giant Elephant Ear Begonia.  It is producing heavily and I am picking them small so I don't get over run.  I have several backup plants started but I don't think I'm going to need them for awhile.  Last year I started pulling my first plants and planted my backups Aug 7th.  I know this plant has more than two good weeks left in it.


This year my strawberry cages did absolutely nothing towards stopping the chipmunks.  They keep the rabbits and the deer away, but those little chipmunks slip right through.  We have killed 13 chipmunks around the garden shed....and a trap is missing so that's probably number 14.  One chippy was fast enough to avoid getting trapped, but lost his whole tail.  I saw it happen and boy did that little tailless bugger fly!  He hasn't been back.  But if we see him again we've named him "Bob".

These cucumber grids from Gardeners.com are supposed to let the vines grow up off of the ground (without having to go straight up) and let the cucumbers hang down through where they are easy to pick.  And they are working just as advertised.  I wish I had bought them sooner.


I went ahead and planted some bush beans earlier than I had planned because I was having a hard time looking at bare un-productive dirt.  And I think I have proven that I should not bother to try growing beans on the west side of the tomatoes.  They just don't get the right amount of sun.  The Purple Queen on the east side are doing fine and are almost ready to bloom.

This year we have no cucumber beetles.  NONE!  I've battled them for several years.  In 2014 I had only three, but last year I had a gazillion and they killed the cantaloupe vines before the melons could ripen.  We have had plenty of honey bees, fewer dragon flies (because no mosquitos?  we tiled some drainage ditches) but a lot of lady bugs.  I usually see a couple each year but I'm seeing them every day now from the front landscaping all the way back to the back tree line.

I have seen virtually no Flea Beetles which in past years have killed entire eggplants and ravaged the potatoes.  I think this is because we covered the beds with stabilization mat last winter. The beetles always hatch on the first warm day in April.  I'll be out in the garden getting things ready for planting and I'll notice that the ties the raised beds are made of are covered with millions of tiny flea beetles like someone has spilled pepper.  If you wave your hands over them you can feel them jumping in waves of thousands.  And nothing kills them.  This year, on one of the first warm days in April I was out in the garden and it suddenly dawned on me - no flea beetles.  If the larvae survived the solarization then the beetles themselves were hopelessly trapped under the tightly woven material.  Ha!  Take that.

We've had an average number of Japanese Beetles and Asparagus Beetles.  But even an average plague of them is a hassle.  The Asparagus Beetles have completely killed off the row of asparagus despite my religious removal of all beetles and larvae every day for two years.  Which brings me to my next Yin and Yang.  Dill.

Because I am not ready to admit complete defeat on the asparagus, and a few stalks still come up, I decided to disguise the ratty row with other things that look like asparagus so the asparagus that did survive could hide in there for another year while I figure this out.  So I planted Dill and Cosmos.

I was thinking that besides the scourge of beetles, the soil must not be very good here because the asparagus was so easy to defeat.  I did every thing I could do to amend it and without actually digging up the asparagus crowns.  But it doesn't seem to have worked.  Note the gap in the dill row.  There is another gap on the other end were two seed spots side by side came up with nothing.  Twice.  I reseeded.  But just look at the difference in those two plants above.  They came from the same seed pack on the same day, 12 inches apart and have received the same treatment from day 1.    There is also a Cosmos plant behind the taller dill which is doing OK but is quite a bit behind the other plants which you can see flowering orange in the background.  I think I have a few blank spots in my soil quality.  Time to dig the whole thing up?


Speaking of soil, I am not having good luck with peppers this year.  I've always had only moderate success with them so this year I dedicated a whole bed to them and decided to learn to grow better peppers.  I planted six packs from the local greenhouse instead of starting from seeds like I usually do.  One pack of Jalapenos, three of generic "Red Bell Pepper" three generic "Yellow Bell Pepper" and then tried one of the few varieties that was actually specified on the tag and I recognized which is Red Knight.


Out of all of those plants, I've only found peppers on 6 plants.  And not a lot.  All of the Jalapenos are doing OK and the two Red Knight on the far end of the bed have some peppers on them.  Now this can caused by a couple of things.
1.  Poor Pollination.  Peppers are self pollinating, so theoretically, high humidity could affect that.
2.  Too much Nitrogen in the soil.  I haven't tested it but this bed I amended with Kelp Meal to give them a little more Potassium, and when they began to bloom I watered with Epsom Salts for Magnesium so I've done my best there.
3.  Weather.  We have had plenty of hot days averaging in the high 80s and this bed gets the most sun which is about 10 hours.  But cooler night time temps could affect it.  We frequently have nights in the low 50s.  The garden will be a few degrees warmer because of the gravel acting as a heat sink.
Whatever it is - this will not be "The Year of the Peppers"

And finally:  Potatoes.  I can't seem to go wrong with potatoes.  We can check that off my learning curve list.  These are from the bed where the zucchini is.  They are volunteers from two years ago.  There were three plants and this is the last one to go.  The main potato crop is in the garden in tubs and doing well.  The next time I need potatoes I will just dump one tub.  That's the easiest way to grow them.

So that's how this year is shaping up.  We have had warm days, not enough rain and moderate success.
Posted by SmartAlex at 10:19 AM 2 comments: 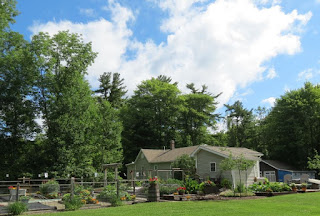 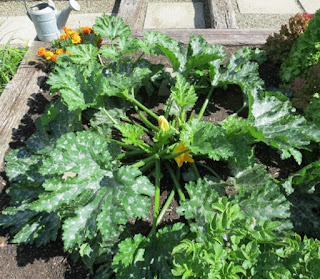 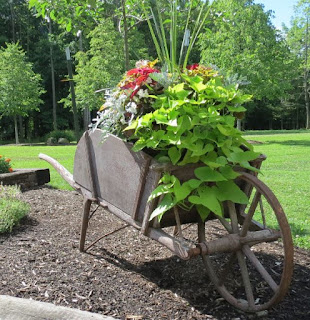 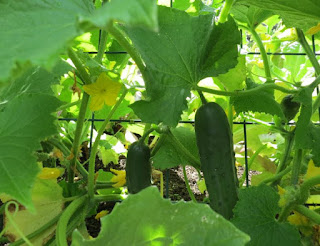 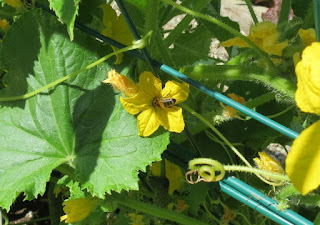 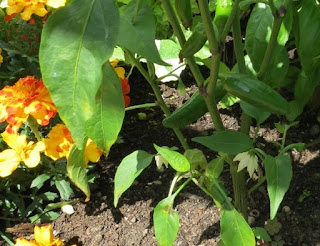 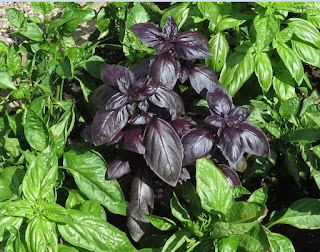 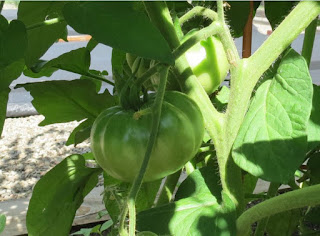 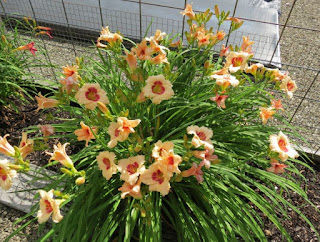 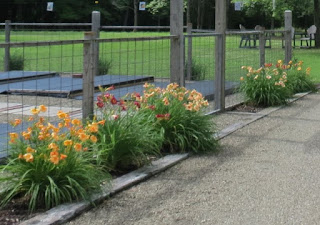 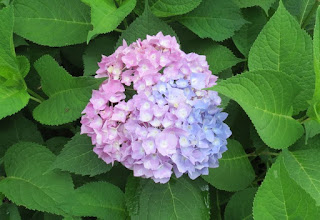 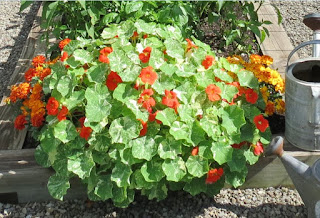 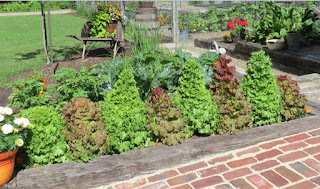 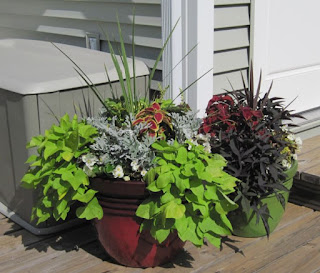 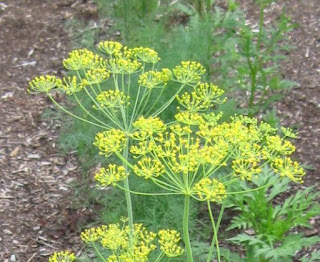 In other news:  last week there were a lot of garden happenings.  We had visitors.  A hot air balloon that skimmed the tree tops and the Master Gardener's club.  But what we really need is a rainy day.