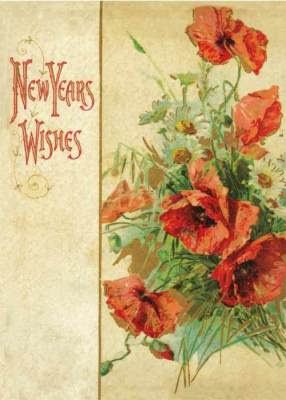 In the Bleak MidWinter 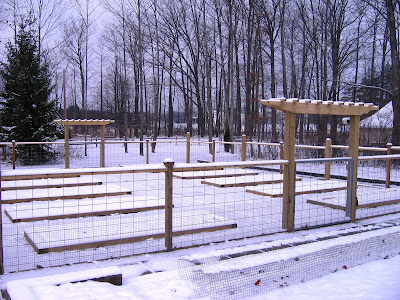 We have had over 5 feet of snow in December. At first it highlighted the raised beds nicely, and then erased them completely. 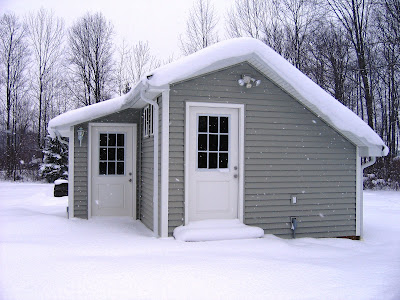 The garden shed remains snug and tidy, like a little gingerbread cottage.

And the snow continues to fall... 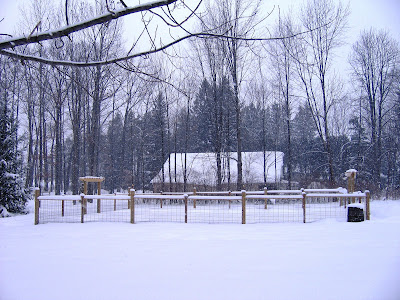 On Christmas Eve, the U.S. Mail brought a huge bundle of colorful seed catalogs. Usually we don't see them until after New Years Day. A fellow gardener, whose wife is a Postmaster, tells of her holding out on him as his seed catalogs sit in the back of her post office with their date stamp taunting him. Few things bring more joy and light to a gardener's winter home than those vibrant wish books.


As usual, I get a notepad and start jotting down ideas. Then I compare my wish list to my more practical shopping list written in August. Of course you have to allow yourself one or two impractical experiments each year. This year mine will be Blue Podded Peas. 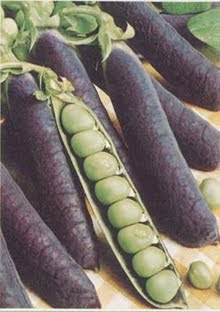 Actually, this is sort of a practical experiment since you already know my views of being able to distinguish pickable parts from non-pickable parts. And the peas will fit nicely into my spring planting. Since the garden was under construction last spring, we missed out on all those early vegetables: Onions, Carrots, Peas, Lettuce, Chard etc. So that will be my focus this year.
I can not tell you how much I look forward to the start of gardening season. There will be no rototilling. No waiting for the mud to subside. No fence to put up. No rows to measure and mark. All I will have to do is stroll down the sidewalk, kneel beside my tidy little beds, already high and dry and prepared for planting, and poke the seeds in. Then I'll probably add a layer of fresh compost and voila'... instant garden!
I have already broken my list down by seed company. First I go for the specific varieties and harder to find items. Then I compare prices on similar items. Finally I fill up the gaps with the common things rounding out each order to make the most of shipping rates. You also have to watch for coupons. I am always suckered into Gurney's $25 offer. .... finally, you have to take into account the seed swap.
On my last post, Julie asked where she would find just a few seeds of sweet corn instead of half a pound. Well, some seeds keep quite well for a couple of years. Others are great for swapping and sharing with friends. For instance, in our neighborhood, Bob and Trish do the onion order. Shelly and I let Bob know what we want, and relinquish some control to his wisdom as Bob and Trish are far more experienced with Onions at this point. I've had great luck with the onion plants they have gotten me. I generally have extra of several kinds of seeds, and am happy to distribute my excess to anyone interested. If you still don't want a larger quantity of seeds, your best bet is to buy them off the seed displays at Garden stores and Big Box stores as those are packaged in much smaller quantities. I often pick some up when they are discounted to try varieties I would not have thought to order.
And some seed swapping is much more far reaching than the neighbors. Several people have expressed interest in planting my PaPaw's Barlow Jap tomatoes. I am still quite tickled to send out a dozen for free whenever anyone asks. And, as good seed trading etiquette dictates, they always reciprocate with a list of varieties they have to trade should I be interested. That's where my Blue Podded Peas are coming from!
I've been keeping an eye out on the gardening forums to see where the Barlow Jap has migrated through swapping and reswapping. So far, they have been grown in OH, PA, AL, NC and KY. Last week I sent some to TX and TN. And they have also jumped the pond and have been grown in Germany and South Africa. Now PaPaw would really get a kick out of that!
Posted by SmartAlex at 3:58 PM 5 comments: 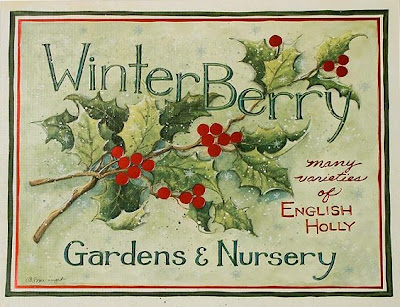 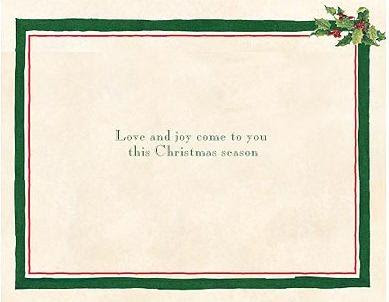 What do gardening and Christmas have in common? Well, in Western NY, not much. But with a little creativity, I've found I can combine two of my favorite things although, they are unlikely bedfellows. As I was flipping through decorating inspirations, I found this great Christmas tree on MarthStewart.com, and I realised I haven't done a blog on Christmas decorating. 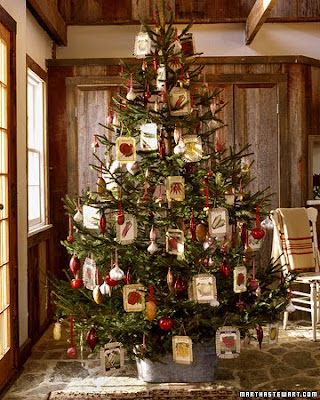 Seed Packet Decorations
Looks like she stole the idea from my seed packet fence markers! Maybe I'll have to make some myself and do a complete garden themed tree. Of course, the seed packet thing has been done before. These are two blown glass ornaments I bought back in 2008 from Smith and Hawken. The best parts about these is that they feature the Card Seed Co packets from a town near here. 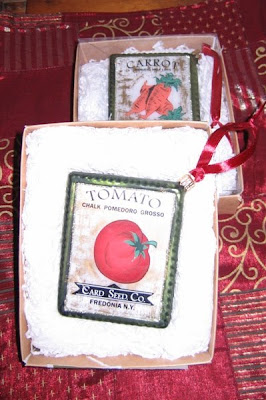 Last year I found this little box of tomato ornaments at the local antiques mall. I wasted no time snatching them up for $2.50. Red tomatoes are a perfect subject for Christmas ornaments, and they also came from Smith and Hawken. 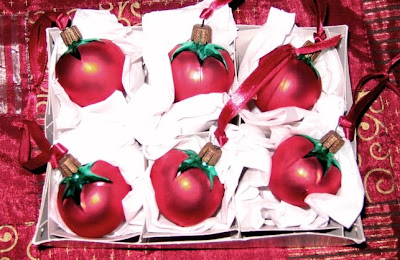 My favorite is a set of three big Heirloom Tomato ornaments (Red, Green and Gold). They are suprisingly difficult to photograph, but here are two of them in a set. I just got the Pea Pod off of Ebay and it is just as wonderful. 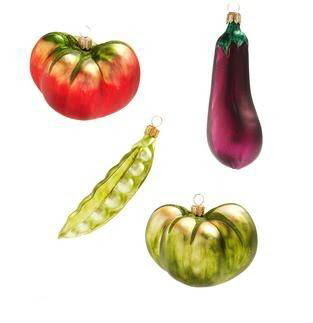 I miss the Smith and Hawken catalog, and I'm looking forward to it's return this spring, but in the meantime Sur La Table is a great resource for gardening themed ornaments. These are the ones I purchased this year. I love the green Wellie boot. I mean, who wouldn't!

And bring back memories of those hot summer days slaving over a batch of pickles... 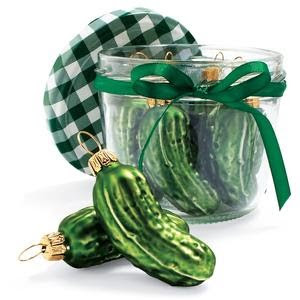 And now and then I find some fun ones around town. These fun farm animals on veggies were found a few years ago and lend a bit of farmhouse whimsy to my decorating.

With a little imagination, you could even incorporate some of your harvest into a holiday wreath 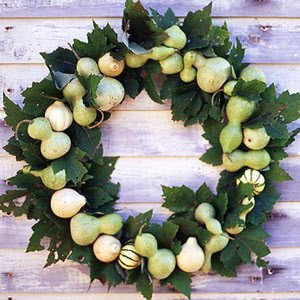 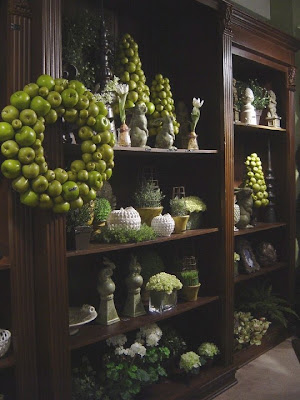 I love searching the internet for ways to cultivate my gardening interests in the deep mid-winter.
Posted by SmartAlex at 12:28 PM 3 comments: 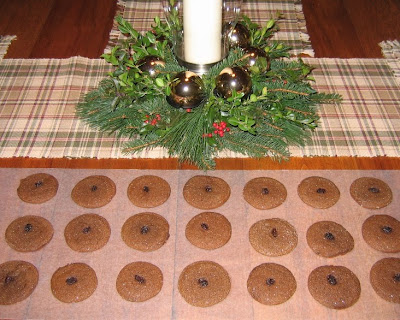