Spring may actually be here.  If not, we're carrying on anyway.  These crocuses were waiting in the snow cover in the morning encouraged by a sunrise and promise of 50* temperatures. 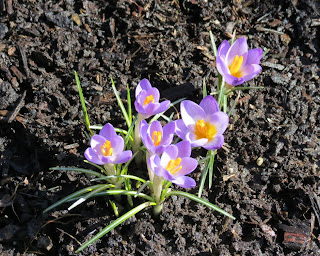 By afternoon the snow was disappearing from all but the darkest corners and the wide puddles covering the lawn the day before had managed to soak into the already saturated ground.  I got started on my To Do list labeled "March" (optimistically). 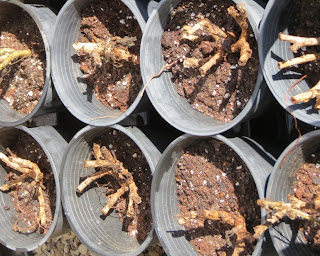 The first thing was to take some measures to protect my sprouting tulips from the now ravenous deer who are craving fresh fruits and vegetables as badly as I am.  Then I straightened the pots stored in the cold frame and potted up some geraniums I saved over bare root from last year.  They don't look too promising but I doubt they're all dead.  I watered everything wintered over in the cold frame.  It's now time to fill some flats and get lettuce and herbs seeded and make full use of the cold frame to start our season early. 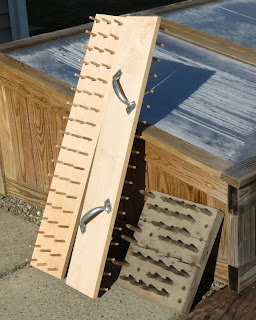 Tim spent the afternoon on one of my wishes, a dibble board.  On the right you can see the vintage one salvaged from the family greenhouse.  Its missing many pegs and is cracked and repaired from years of use.  The board would have made holes in 4 six plant peat packs so the seedlings could have been easily transplanted.  My boards are intended for speed in planting beans, especially black beans, which, instead of rows, are planted in the whole bed, 2 inches apart in any direction.  I don't need to tell you, that's time consuming!  I can now poke 54 holes at once, and then lay the next board beside it and poke 54 more holes.  If I need to alter the spacing, I can just skip a hole or a row of holes.  The best part is that they were made entirely of scrap we had lying around.  2 hard maple plants, and some dowel rod and some handles that had been taken off of somethingorother.  If you would like instructions on making your own dibble board, here is the blog that I followed Beekman 1802

Black beans were my favorite crop last year.  I still have a precious few left in a jar, and there is a batch simmering on the stove right now.  After catching a Dr. Oz segment on homeopathic food and remedies this past week which included some of the fascinating benefits of black beans, Tim has agreed to try them :).  So I'm making up some to serve on leftover rice for supper.  You can find many versions of the recipe on the web, but tonight I'm going easy on Tim and not put anything fancy in them.  I'm just going to flavor them with some onion salt, garlic powder and chili pepper (Tim loves hot chili con carne).  I'll add some diced tomatoes over the top for me.
Posted by SmartAlex at 2:33 PM No comments:

I could go on for paragraphs about the fact that this winter is of normal length where as last winter was very mild and short and my potatoes were already sprouting.  But, those of you in the north are dealing with the same issue, and those of you in the south don't need to hear us whine about it...

This month's Country Living has a two page feature on collecting seed packets to tide us over.

I've already spoken at length about my passion for seed packets (and vintage seed catalogs, particularly those of the Three Seedswomen, and covers for magazines with garden themes).  But I don't believe I've ever shared this relatively recent purchase with you.

This is the lid only of a seed store display box.  It is from the Card Seed Company in nearby Fredonia, NY where I went to college.  Card Seed packets are very easy to come by.  A large, unused stock of them was found in a warehouse and has been widely circulated.  Now and then I'll find an an example of an older version in an antique store.  Those are more fun to come across.  This lid hangs on the wall in my kitchen.  I'm so glad someone, nearly a hundred years ago, pulled it off it's crate and hung it up to enjoy so that all these years later, I could do the same.

I love illustration art and lithographs.  I am also a sucker for boxes and crates and such.  Almost every tall piece of furniture in our house is topped with a lithographed advertising box.   The Rush Park seed box below I got for a bargain on Ebay some years ago.  It stays on top of the Pie Safe and hides my seed packets from year to year. 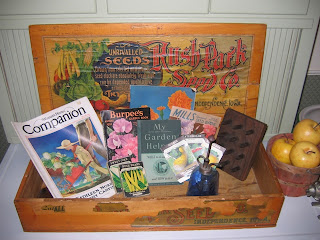 This Nabisco (Niagara Biscuit Company) cracker box my mother picked up at an auction long ago.  It tops a chest of drawers and hides large salad bowls.  Sadly, someone painted over the litho on the front but it doesn't hurt it's looks much.

This very rare Jamestown Baking box originally held "Honey Cart Wheels", or so says the label on the side, and comes from my hometown.  I eyed it at the antique mall for well over a year until such time as  a discount and cash in pocket tempted Tim and I beyond reason.  It now sits on top of our office hutch. 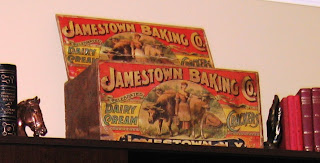 Well, that's all the garden inspiration I can manage for this week.  I just know my crocuses are up, buried under 10 inches of lake effect snow.  Spring Cleaning has commenced although Spring itself seems a bit tardy.  I am now off to order some Hollyhocks to cheer myself up.