Even though the season is over, and the garden is put away, there is still puttering to be done. We've washed the bench cushions and stored them away. Tidied up the shed. Removed the freezable chemicals and put them in the cellar. And cut new rings of woven wire to protect the shrubs from the deer. 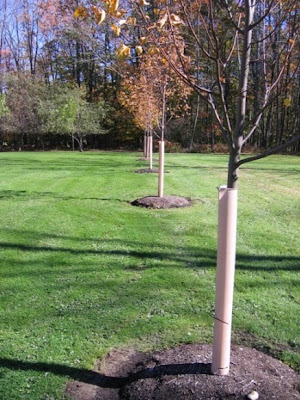 We also put tree tubes around the smaller trees to protect them from rabbits, but not before the young four point buck scraped a couple of them up. So we put pruning patch on the worst areas, and put the tubes over. We also preemptively staked the mulberry trees which will not have the good sense to lose their leaves before the first snowfall. These trees really take a beating. They are obviously not suited to zone 5. Their first leaves always come out before the last heavy frost. And last year, they were still green in November, and the first heavy wet snow, we came out in the morning to find them laying flat. And I mean flat. But, we picked them up, shook them off, and tied them back up. And they seem to get over it all. 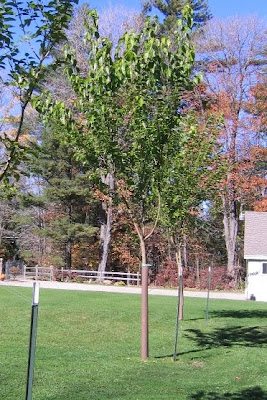 And the little Astrachan apple trees are growing by leaps and bounds. Next spring we'll take the tubes off and stake and fence them instead. 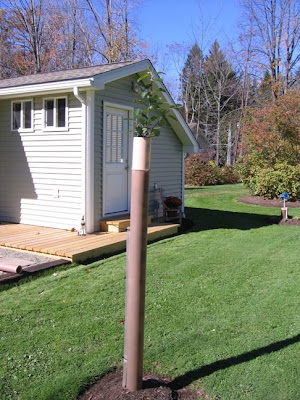 Now is also the time to putter about with soil conditions. There appears to be a calcium deficiency, as evidenced by our blossom end rot. Adding bone meal at the roots kept it at bay, but I went to the feed store and bought a couple of bags of ground oyster shell grit and spread it liberally. It will have all winter to leach through the soil, and in the spring, we'll work it in as we plant. 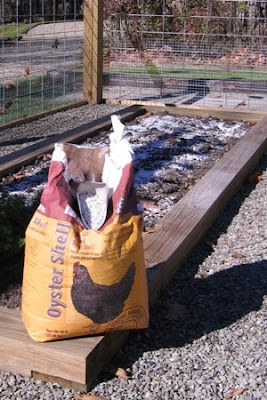 We are still enjoying fresh beans and peas from the garden. The Maestro Peas and Blue Lake bush beans are doing great. The Survivor Peas are a bit slow, and the Goldmine Beans gave up pretty quick. So next year we'll skip those varieties. This one Maestro plant is really rising to the occassion! 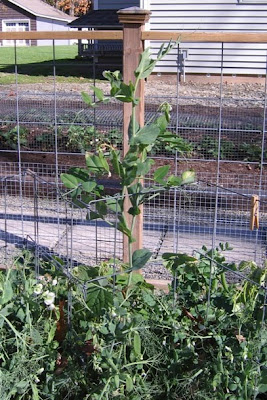