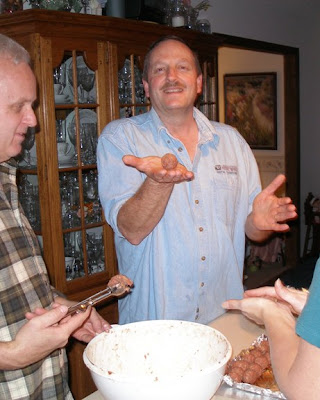 Every year (or so) we buy a side of beef. The biggest problem I have with that is... what the heck do you do with half a dead cow? And I'm not a huge fan of beef anyway. This last time, we specifically told the butcher we did not want any more than 75# or so pounds of ground beef, and that they should find other more creative ways of dealing with the rest of it. Stew beef is always a lovely option.

When we went to pick it up, we had no less than ONE HUNDRED AND TWENTY NINE pounds of ground. 129. Pounds. And I know I'm remembering that correctly, because I made mention of it on a chat site, and I can go back and check. That was a little over a year ago, and we still have 60 pounds or so lurking about the freezer. See, this is the problem with buying locally and in bulk. Why can't they make cows that consist only of rib eye steaks with one roast, #20 of stew beef, and #50 of ground. Richard, if you are reading this, may I suggest you look into Low Line Angus or some other tiny bovine?

So, naturally, we are getting a bit desperate for ways to use this ground beef. Thus Meatball Fest was conceived. This past weekend, while most of America was out scrambling around trying to get the best deal on a new flat screen TV, we were over at the neighbors making meat balls. I took a #20 pound tote full of beef out and put it on the side porch to thaw (I am a big fan of natural refrigeration), and Mike and Shelly gathered the other ingredients. We always have enough eggs we can collect up, even though Mom's chickens are moulting and a bit off their game.

Shelly had her mother's meatball recipe, and I had my Grandmother's Swedish Meatball recipe. We roughly divided the beef between the two, warmed the Glogg, put on Christmas music and popped open a bottle of wine. The meatballing commenced. We didn't have a firm plan of attack, but each of us fell into our favored tasks. Mike tried peeling onions which brought him to tears. I took over because they don't bother me. Shelly measured out ingredients and watched the timer, acting as referee between the many tasks to be done in a relatively small area. Mike mixed the large batches by hand. Tim worked the scooper keeping two roller's hands full, and ran trays in and out of the garage to cool. 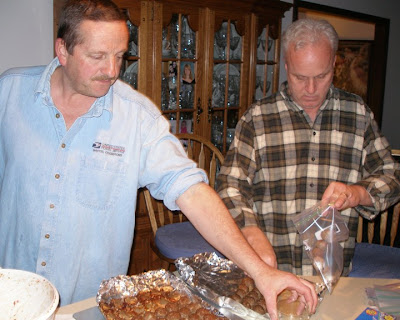 Six hours later we had many dozen baked meatballs divied up into zip lock bags and back in the freezer. Through the Holidays and the winter, if we need a quick hors d'oeuvres or dinner idea, all we have to do is grab the appropriate number of bags of home made meatballs out of the freezer, and we're in business. I think next we ought to have a Korv stuffing party.
Grandma's Swedish Meatballs:
3 pounds of ground beef
3 medium onions diced
3 eggs
1 1/2 cups bread crumbs (I use the Italian seasoned ones)
4 shakes of black pepper
4 shakes of Allspice
roll into small meatballs, makes about 3 dozen
To cook them you have two options. You can place them on a cookie sheet and bake at 375 for 25 minutes. Or, you can lightly flour them, brown them in a frying pan, then put them in beef broth to simmer for an hour. When I serve them at the Holiday, I put them in a crock pot, cover them with broth, and put them on low.
Posted by SmartAlex at 4:21 PM 3 comments:

Now that the beauty of autumn is past, and the temperatures are dropping, my interests have turned indoors to cooking, eating and home making. Neighbor Mike has gone on a bread making spree, thanks to my loaning him William Alexander's book 52 Loaves of Bread, and he loves to share. I've taken up making sweet, dark Anadama bread to trade him and I'm enjoying the rich butteriness of winter squash. I'm starting my mornings with hot tea, and finishing my evenings with hot cider or Glögg. The house has been filled with warm and delicious smells. What is Glögg? What do you mean you don't know what Glögg is! I can't believe you are missing out on such a useful winter elixir.

Many European and especially Scandinavian cultures have a traditional variation of mulled wine, usually red wine, heavily spiced, and served warm. King Gustav I Vasa of Sweden was fond of a drink made from German wine, sugar, honey, cinnamon, ginger, cardamom and cloves and in 1609 it was called "glödgad vin", which meant "glowing-hot wine." This has been shortened to in Swedish and Icelandic to Glögg, Norwegian and Danish call it Gløgg, Finnish and Estonian have Glögi.

The American Swedes, particularly those native to our far corner of New York, have taken their Glögg a step further, and created a deadly concoction involving the highest proof grain alcohol they can get their hands on. It's potent stuff, being 1/3 moonshine. Now I'm "swedish" (half Swede), but my husband is Svedish, and when he introduced me to the family recipes for Glögg and Tom and Jerrys, I quickly concluded that his family's Swedish tradition was obviously to stay loaded from Thanksgiving through New Years. 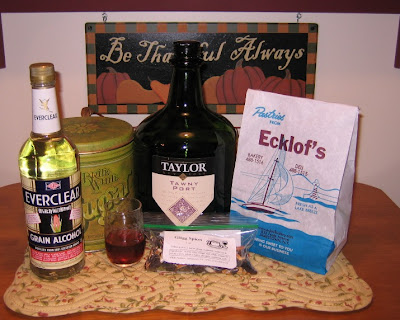 The Glögg tradition starts in late summer with the outsourcing of grain alcohol. You see, the American Government has concluded that the public is not to be trusted with high grade alcohol. There are now only a handful of states where you can buy "the good stuff" which is 190 proof Everclear or Graves grain alcohol and our lovely state ain't one of 'em. The 151 proof version doesn't provide enough kick with the normal recipe, and the higher proof vodkas change the taste. In the past, I've been able to find Moonshine amongst some of my West Virginian coworkers, but the quality and proof varies greatly, so its easier to just import the store bought stuff. Around August or September, we start making calls to our contacts in Maryland, and the Carolinas to get the necessary ingredient.

The spices will be in the old, family owned Swedish bakeries and markets around the first week of November. But, we always put aside enough spices to start us out next year. The weather will likely turn before November, and we will ration whatever is left from last year's Glögg while keeping an eye on the calendar. You see, Glögg is important. We don't want to get caught without. And, now I see you can buy Glögg spices online through Amazon, and several other Swedish storefronts. But the local version has been unchanged for a couple of generations. The spice packets, are about the only part that is unchanged, as each family has their own subtle variation. The Johnson Family Cookbook has 4 markedly different variations.

So, what makes this precious firewater so special? Well, first, let me say that we serve Glögg in a 4 ounce glass. Few people are up to a second round. It's served steeping hot, just on the verge of boiling. Thus heated it will radiate fumes which make in unwise to inhale over your glass. If you have a head cold, it will clear it. If you have a chill, it will chase it. If you have insomnia, it will cure it. It is a necessary antidote to shoveling or plowing snow. It lends a warm, cozy glow to dark blustery evenings. It goes well with cookies.

The recipe starts with the spice packet containing cinnamon sticks, almonds, cloves, cardamon seeds, raisins and dried orange peel. Some people use the "fruit" version which includes dried apricots and prunes and perhaps some slices of apple, although I'm not sure about the wisdom of combining prunes and fuel grade alcohol. We use a double spice packet, dumping them loose into a stock pot with two quarts of water, and simmer them under cover for at least two hours. As a bonus, within 10 minutes, the whole house will begin to smell of cinnamon and cloves. I've found that it's a good time to let the Anadama bread dough rise on the stove top, while the spices simmer beside it.

After two hours, the water will have reduced by half, and the only real work begins. You have to strain out the spices. What I do, is use a slotted spoon to fish out the majority of the spices leaving just a little scrunge in the pot. 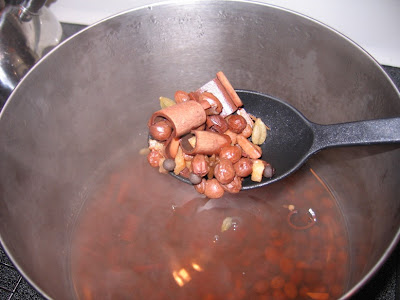 Then I strain the water through several layers of high quality cheese cloth which can be washed out to reuse again and again. Then, you rinse the stock pot, return the liquid to the pot, and the pot to the heat. Next you add the sugar. We use two cups because we like it sweet. After the sugar is fully dissolved, you can turn off the heat and add the wine and grain alcohol. 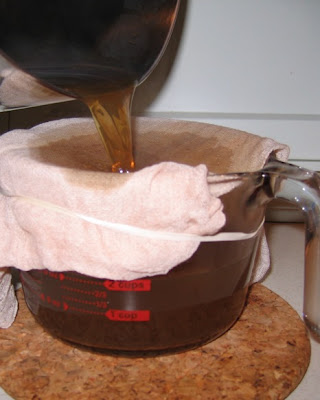 For wine, we use Taylor Tawny Port. We've also used plain Taylor Port, but it isn't as flavorful. This is also where the individual family recipes begin to vary. The most common variation seems to be the addition of Brandy, but I've heard other things too such as Sherry and even Rum. Honestly, the Tawny Port tastes very much like the finished product in milder form. We add one quart of the Tawny Port, then one quart of the grain alcohol. Two years ago, for our pre-Christmas party and hay ride, I made a terrific batch from the last bottle of Tim's father's collection using a 1940's bottle of grain alcohol with the brand name Pharm-X-O. That's right. Rubbing alcohol. We had to pick two neighbors up off the floor.

This is when the Glögg tastes the best... right off the stove. You have to be careful to take it off the heat at this point, or all the alcohol content will burn off. The fumes coming from the pot are flammable. You can touch a match to it, and it will burn quite vigorously with a mellow blue flame. Tim's father claimed this burned off the impurities, but really, it's just a party trick to demonstrate the proof of the alcohol. You can put the flames out by covering the pot.

You now have a $50 batch of Glögg to be distributed amongst your friends. As I said, it's best hot off the stove, but we put it up in any screw top bottles we can find to give as gifts, and we've found it keeps just fine for several years, although it does start to "mother" and produce sediment that needs to be filtered out. Now, if you'll excuse me, I have a stock pot full of spice water cooling on the stove as I write, and I need to go and strain some spices and finish batch number three... yes, it's the second week of November, and we're already on batch number three. Yesterday, we sat in lawn chairs in the beautiful 50 degree sunshine, sipping mugs of Glögg and surveying the winter garden beds... wintertime dreaming of gardening.
Posted by SmartAlex at 6:08 PM 3 comments: