This weekend I put in my second asparagus bed. The first one has been abandoned to lawn, sadly, in year 3 when I would just be seeing some decent sized spears. The new asparagus bed is on the slope between the garden shed and the garden with the other "perennial" foods such as rhubarb, strawberries and horse radish. There is a clump of horse radish on each end of the asparagus row. Well, actually there was a clump on one end, and the first thing I needed to do was get a second clump started. The big clump of horse radish is on the back corner of the house. This batch I salvaged out of what was the chicken yard, and is now lawn. Since then, Tim has tried to get me to get rid of that clump, and I keep digging it up and transplanting it. But, in typical horse radish fashion, it only comes back bigger and thriftier. It likes the corner of the house. 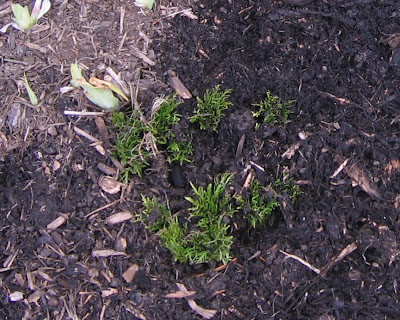 Sunday I examined the new shoots, and found two or three off to the side. I began digging, got two small roots, and then hit on a 3/4" root that seemed to disappear under the house. I dug about 20" out before I gave up and broke it off. 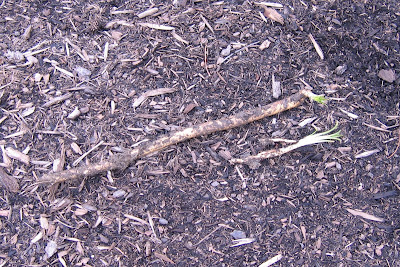 Because I don't want this thing heading off in new directions already, I broke that in half, put some in the fridge for later, and planted the more manageable remaining foot long root at the end of where I want the asparagus row to be. I got out a string line, drove a spike in the existing clump, measured from the edge, and drove a spike in the second clump. Then I began raking the thick mulch away from my new row. 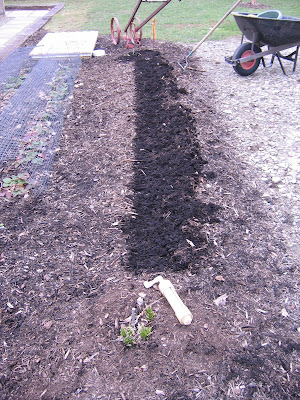 They say you should make a ridge down the middle of your "trench" so you can set the crown on the top of the ridge and arrange the roots down the sides, encouraging them to grow down deeper. I did this, then spread a cup or so of bone meal down my trench. 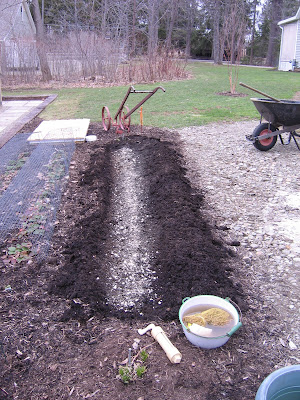 The asparagus crowns had been soaking in water for a day, and were ready to plant. I laid out a tape measure, and spaced them along my trench about 18" apart. 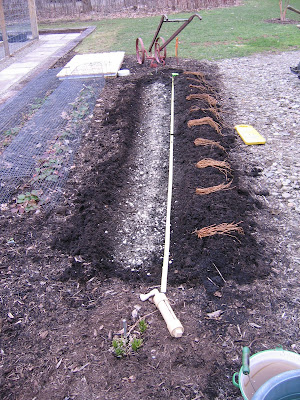 Then I placed each one on top of my ridge, arranging the roots. 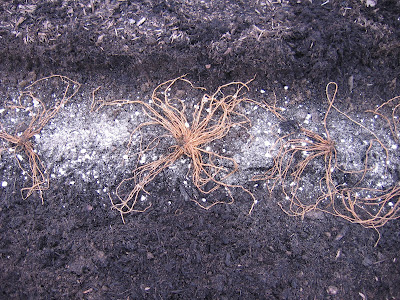 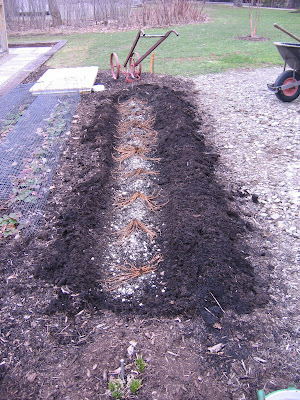 Each crown should be covered about 2" to 3" initially, with more soil or mulch being added throughout the season. Interestingly enough, I've read that the depth of the crown is what determines the thickness of the shoots. The more shallow crowns produce the thinner shoots, and the deeper crowns produce the thicker shoots. 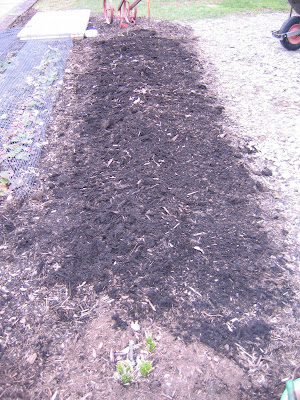 While I was diddling around in the asparagus bed, Mike and Tim were scraping and regrading Mike's driveway. There was quite a buildup if gravel, dirt and moss which required the box scraper to remove, and the bucket to redistribute and level. 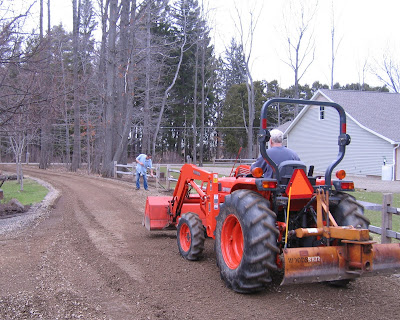 Then Mike got the priveledge of using Tim's "Two Ton Rock Crusher". Actually, it's only one and a half tons. But I affectionately call it Two Ton. When you roll it down the road, any gravel in it's way explodes into smithereens. Tim fabricated Two Ton in response to being gravely disappointed in all commercially available lawn rollers. He bought one a couple of years ago, and after using it once or twice, returned it's mangled fragments to the dealership in disgust. He then set about building a more usefull version. But you have to be careful. If the lawn is too wet, it will crumple it up like a a throw rug. 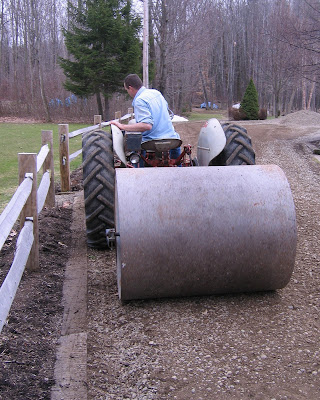 Only Mike and Tim could turn driveway rolling into recreation. They look like they're having a good time don't they? 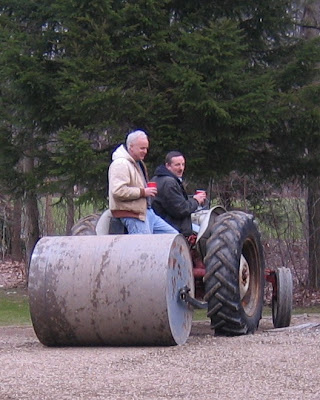 Posted by SmartAlex at 7:41 PM