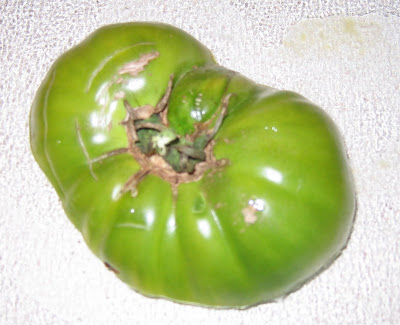 Ladies and Gentlemen, we have found a yummy "green when ripe" tomato! Which is great because I love the concept, but the last variety I tried tasted like... well, dirt. I got this variety in a trade. I was looking forward to it. It is a big, robust plant, and when the first one ripened, I was just going to slice it up for dinner. 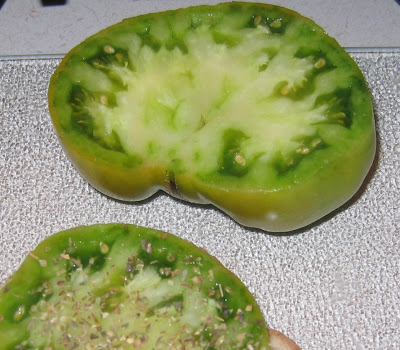 The fits bite was so good, I stopped what I was doing and got out the bread and mayo! This ones is a keeper. It reminded me very much of the Ananas Noir, which I will probably forego next year in favor of Absinthe. The Absinthe was bred from crosses of Emeraude, Aunt Ruby's German Green (my former "dirt" tasting tomato), and Evergreen. One line of them is outcrossed to everyone's favorite Brandywine, and I'm not sure which version I have. Created by Alan Bishop in the mid 2000's, it is green, trending towards yellow when ripe with an occasional shot through of red. It is a medium, oblate, slicer, Beefsteak type, ripening midseason. 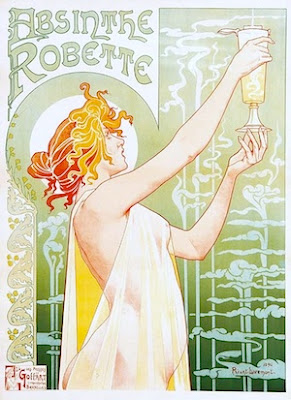 Now what attracted me first to this tomato was the wonderful name. As with most "heirloom" type tomatoes, half of the fun is the story and the name and any intriguing connotations it may have. Absinthe the tomato is well named although that is not it's sole attraction. 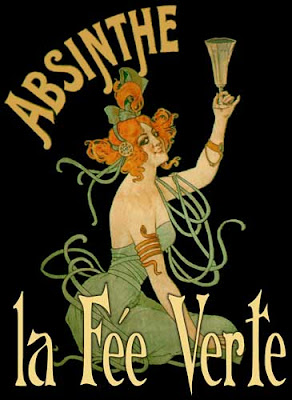 Absinthe, the alcoholic drink,has been portrayed as a dangerously addictive psychoactive drug and was therefore banned in the United States. According to Wikipedia, it is an anise-flavoured spirit derived from herbs, including the flowers and leaves of the herb Artemisia absinthium, commonly referred to as "grande wormwood", together with green anise and sweet fennel. Absinthe traditionally has a natural green colour but can also be colourless. It is commonly referred to in historical literature as "la fée verte" (the "green fairy" in French). Absinthe underwent a surge in popularity in the 1990s and the ban has now been lifted in the US. I first heard of it as the drink of choice by W.C. Fields character Egbert Souse' in the Black Pussy Cafe. 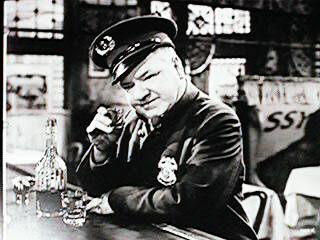 More from Wikipedia: Traditionally, absinthe is prepared by placing a sugar cube on top of a specially designed slotted spoon and then placing the spoon on the glass which has been filled with a shot of absinthe. Ice-cold water is then poured or dripped over the sugar cube so that the water is slowly and evenly displaced into the absinthe, typically 1 part absinthe and 3 to 5 parts water. During this process, components not soluble in water (mainly those from anise, fennel, and star anise) come out of solution and cloud the drink. The resulting milky opalescence is called the louche (French for "opaque" or "shady"). Releasing these components allows herbal aromas and flavours to "blossom" or "bloom" and brings out subtleties originally over-powered by the anise. This is often referred to as "The French Method." 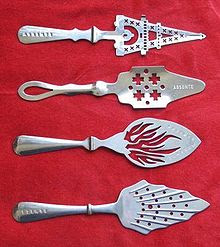