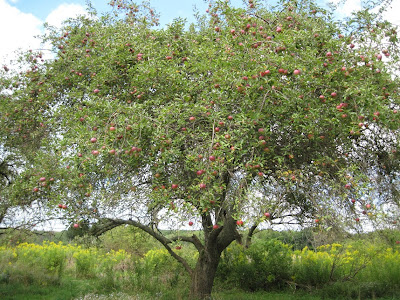 This is going to be a banner year for apples in our neck of the woods. Every wild apple tree you pass on the side of the road is loaded with apples. We have a Yellow Transparent, a Cortland, and a Macintosh in our backyard, but the crows and the squirrels stripped all but a couple of dozen apples off the trees. Not to worry, on my farmland we have an Orchard, and I was pleased to discover that there were much more than enough apples for us.

My Great Uncle Doug planted the orchard in 1938. When Great Grandpa Fred came on the farm in 1905, there were old orchards (as was common on farms then) on both "upper" and "lower" farms. Some farmers in the 19th century and turn of the century grew a lot of apples. Some were sent to apple driers in nearby Ashville and put in barrels and exported to Germany.
﻿ 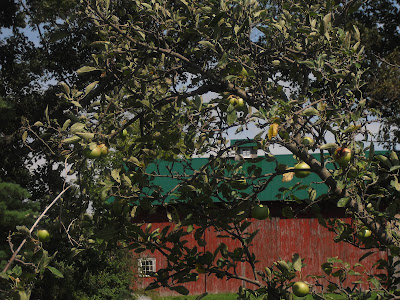 The orchard on my farm was across the cow lane from where it is now, on a two acre field. The severe winters of the 1930's and age killed off the old orchards. Some winters were so cold the trunks of trees would freeze and burst and that sounded "like rifle shots" according to my Grandfather.

Uncle Doug planted the new orchard with more modern varieties. It was one of very few, if not the only orchard in Busti planted that late. He ordered the trees from the Stark Brothers  mail order nursery. My uncle Norman used to have to count the trees and report the number along with how many bushels of apples he saved and how many he took in for cider to the government.

By studying an aerial photo I’ve determined there may have originally been as many as 84 trees, and fewer than 30 remain alive. My Grandfather never trimmed or sprayed it. One year neighbors with a cider mill rented it and trimmed it up and tried to put it in commercial condition for a year or two. I believe my Great Grandfather used to graze sheep in there to keep the grass down, and I remember my Grandfather keeping a couple of hives of honey bees in the back. Other than that, the orchard has been left to it's own devices and is in need of some clean up. 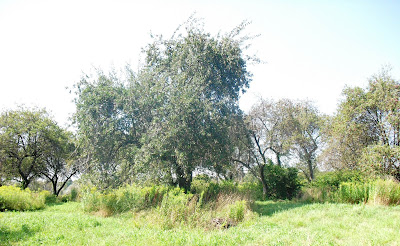 My uncle tells that in the 1970's they used to bag up many bushels of apples and have cider made in several batches. They brought it home in milk cans but put it in big 20 gallon earthenware crocks and kept it out in the snow to have cider into December. I remember them laying tarps under the trees to catch the windfall apples.
My Grandmother also canned and froze cider in gallon jugs: glass for canning and plastic for freezing. We drank a lot of cider! We also had applesauce made from the Yellow Transparents, and dried apples dried on cookie sheets beside the wood stove. My sister and I learned to make apple dumplings, and that was all the rage for a year or two.

They stored apples in baskets in the root cellar. A few times in the winter someone would have to go through the remaining apples in the cellar and cull the rotten ones. I remember the cellar smelling of dried leaves and the faint smuttiness of rotting apples.

The past few weeks I have been keeping an eye on the trees, and have been tormented by loads of ripe apples falling to the ground to be enjoyed by the deer and woodchucks. There are McIntosh, Cortland, a Greening for cooking, Double Red Delicious which are still starchy and hard, Red Spies, Northern Spies and one King tree which is covered with large pale apples. 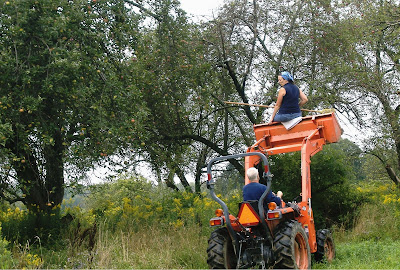 These are BIG trees. You can only reach a few from the ground, and my attempts at picking them from the back of my horse (who knew I was picking apples and therefore wanted to help) were frustrating at best. Around here, if you want to get to something up high, you grab a Kubota! 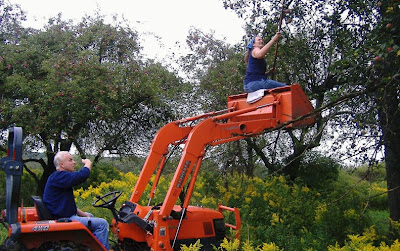 I am overtired
Of the great harvest I myself desired.
There were ten thousand thousand fruit to touch,
Cherish in hand, lift down, and not let fall,
For all
That struck the earth,
No matter if not bruised, or spiked with stubble,
Went surely to the cider-apple heap
As of no worth.
~Robert Frost

All this bounty makes us greedy. We hate to see it go to waste. But of course, there are only so many apples you can eat or cook in a week. So Tim immediately began to think of cider. He doesn't even drink cider! I drink plenty of cider in the fall. I began by warming it and adding a shot of Captain Morgan Rum for a spicy drink. There is a restaurant that we frequent who has put me on to a few other combinations. Add Butterscotch Schnapps for a drink that tastes like warm apple pie. Add Peach Schnapps and the peach almost totally takes over for a wonderful zingy peach drink. 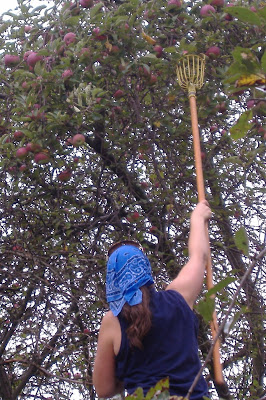 My instep arch not only keeps the ache,
It keeps the pressure of a ladder-round.
And I keep hearing from the cellar-bin
That rumbling sound
Of load on load of apples coming in.
For I have had too much
Of apple-picking;
~Robert Frost


I actually do have an antique orchard ladder (they are narrow at the top) but that would have been useless in this situation. Mom's apple picker DID come in very handy. Although I knocked off quite a few, sending them pelting down on Tim and Mom's heads.

There's a barrel that I didn't fill
Beside it, and there may be two or three
Apples I didn't pick upon some bough.
But I am done with apple-picking now
~Robert Frost

I talked to my dad the next day and at Tim's insistence I asked him what had become of PaPaw's cider press in Kentucky. He didn't know, but he said he had one in the garage that had followed him home from a garage sale. It needed a new drum, but I told him I would stop by and see it because I know you can buy the new drums online.

How long do you think it takes a guy to load something very heavy into his truck and drive 7 miles? Before I knew it, my father was hollering my name through the screen door, and this.... 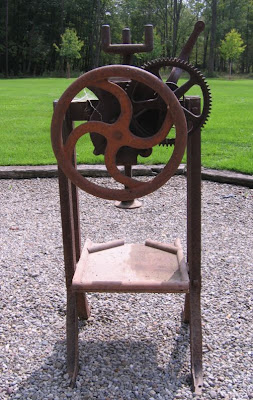 ....was sitting in our driveway. Never balk at a chance to get rid of some junk.

The mechanics of it are clean, well oiled, and crank with ease. It has a grinder which Tim didn't think would do much in the way of chopping an apple, until we dropped a couple in and were rewarded with a pile of apple shards on the driveway. An efficient grinder it certainly is!


But this will probably be next year's project. Tim naturally wants to sand blast it and pretty it up, and we still need a replacement drum, a pusher (for lack of a better word) for the top, and I'll be sewing some sacks to go in the drum.

After all that excitement, I began to cook apples. I made both applesauce and apple butter (more on that another time). And this is just the beginning! There are more apples ripening every day!

Posted by SmartAlex at 7:39 PM