We've now topped 7.5" of rainfall in June.  I haven't had to water much, that's for sure.  Actually just once in order to fertilize.  And I've done very little weeding because of the lasagna gardening method.  In the fall I put down a layer of chopped leaves under a layer of compost.  In the spring I only rake the rubbish off the top with a bow rake and plant disturbing the soil as little as possible.  This avoids disrupting my earth worms and seals the weed seeds under the mulch.  The success of this is easy to gauge against Mike and Shelly's half of the garden.  They mulch like I do in the fall but then hand till their soil each spring.  I can watch their weed growth as compared to mine and see how much time they spend weeding.  Lasagna is the way to go!

Everything is looking wonderful.  We are eating peas, some new potatoes, lettuce, garlic, onions and I've had one zucchini.

I am looking forward to pulling the peas out and getting some bush beans planted.  The peas need to be picked daily now and the earliest variety is done and beginning to die off.  I've only had one lettuce plant bolt.  I put in a lot of head lettuce and I am now cutting whole plants of romaine and leaf lettuce instead of trimming the outside leaves.  I estimate if we eat salads everyday we will come to the end of it at just about the time it would be bolting.

My Cold Frame tomatoes are a success again this year.  You just have to get past the part where you are planting midgets instead of giants in gallon pots.  Planting the tiny is a lot less stressful on the plant.  It is too easy to damage a large plant.  I've even broken them right off. 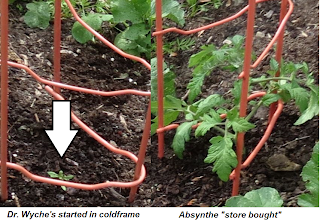 Above is Memorial Day Weekend.  The Dr. Whyche's on the left was sporting it's first set of true leaves.  The one on the right is the nice Absynthe I bought at my friend Mickey's greenhouse. 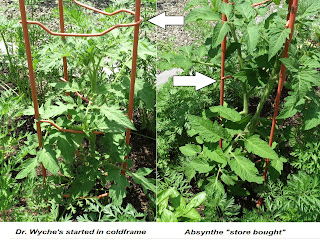 This weekend the Dr. Wyche's is lagging behind by one rung on the tomato ladder or about 6".  Neither plant has bloomed but they are both budding. 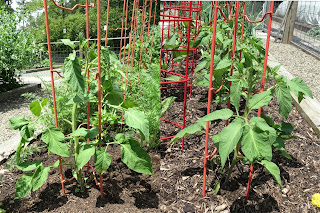 But the most interesting race is between two Barlow Jap plants.  The one on the right was late to germinate.  I kept it back two weeks in the cold frame reluctant to transplant it or even give it away.  It is now only inches behind the nice plant I transplanted at 4". They are both blooming and I'll bet they set fruit at the same time.  Among the late to germinate seedlings that were held back is the one Absynthe that was the last seed to germinate and the single Absynthe.  I had completely given up hope which is why I bought a transplant.  It was about 3 weeks behind my other cold frame babies. It is now only inches behind the "store bought" plant and has buds on it.  It will be interesting to see if it sets fruit at the same time. 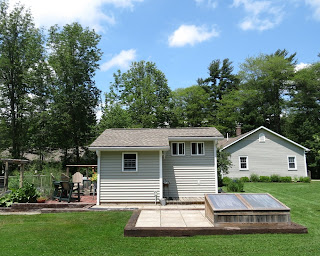 Tim has been busy too.  He added another "patio" to the garden complex.  This gets the cold frame off the side walk and when the lid is opened up all the way we will no longer have to go the long way around to get to the garden shed door.  I think there is also enough room for a couple of chairs, or a bench or some other non-sense that I can think up. 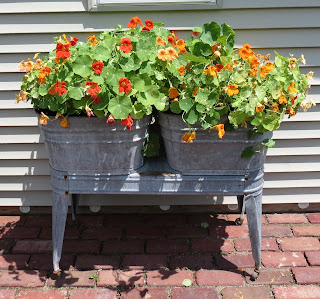 My Alaska Nasturtium is looking quite stunning in the laundry basin.  There are also a few Fordhook's Favorites volunteered from last year which are trying to ramble all over.  June is the prettiest time of year in the garden.

Posted by SmartAlex at 6:56 PM