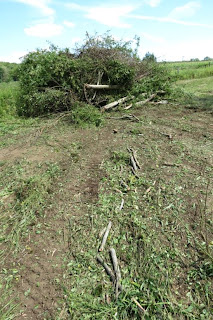 Back in July we spent a day clearing most of my apple orchard.  We did about 80% of the two acres, leaving the heavily overgrown back 75 feet or so. We worked until about 4 pm and then we moved on to other work on the land, in particular, cutting up and stacking a huge cherry tree that had been struck by lightening and peeled like a banana making it difficult for the farmer who rents the pasture to mow around.  When my uncle got home that day, he saw what we had accomplished but he asked   "I wonder why they didn't finish the whole orchard."  Well.  Because we were bushed.  So to speak. 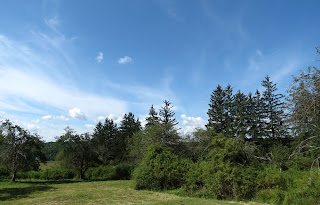 This unfinished business has been wearing on Tim.  He wants the rose bushes gone once and for all.  And so, today, we set out to finish what we'd started.  We had a beautiful day to do it.  As we prepared to leave the house Tim said "This is going to be fun."  After all, he's always up for some bull dozing with the promise of some recreational back hoeing in the form of stump plucking.  These are 75 year old mostly dead trees.  This ought to be easy.  Or at least "fun". 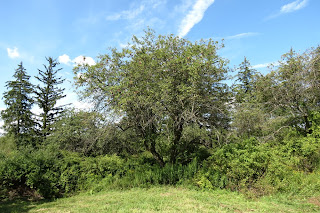 When faced with the wall of thorns, he was undaunted.  That is 75 feet of solid rose bush from the apple tree back to the row of evergreens which shelter the orchard from the prevailing west wind.  No Problem.  A person cannot even walk through it.
After checking with me that there were no ravines or boulders (Nope, just a third of an acre of solid brush with some apple trees buried here and there... have at it) he dozed into the fray. 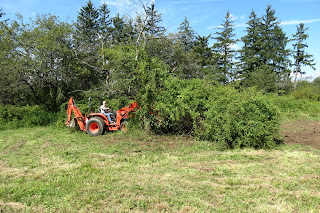 This was no neat mowing job with islands of rose bushes.  This was a giant undertaking.  My stepfather Richard had already done his part neatly mowing the cleared portion of the orchard which will make picking up apples for cider so much easier.


The above video shows a typical scene.  Imagine that... for eight hours. A less blurry, non-bloggerized version can be seen at http://www.youtube.com/watch?v=tHW9Ju7aPB8
Sometimes all there was to see was a wall of green, a flash or orange and some movement.  Often there was swearing.  Once there was a gleeful report "I see Daylight!" 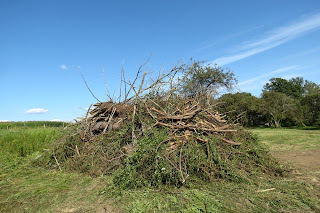 This is the pile we collected.  It was larger than the last one and Tim was disappointed in the photo.  He says he should have parked his tractor next to it.  Well.  See that apple tree just behind it, sort of in the middle of the horizon?  That's about 25 feet tall.  And there are sections of evergreen trunk over two feet thick perched on the top. 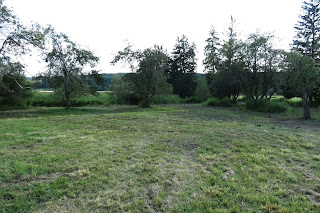 Now the whole apple orchard is all tidy again.  You can even see through to the pasture beyond.  Any tree that had so much as a dozen apples on it was saved.  The rule was "knock all the dead off it and if the trunk is still standing, leave her alone".  We have been trying to map out all the varieties, but before now, some of the trees were completely inaccessible.  Another challenge is that our commercialized pallets are only able to distinguish the more common varieties such as MacIntosh, Cortland, Empire etc.  There are varieties in this orchard we have forgotten the names of.  All the more reason to preserve as many as we can.  Next year I am going to plant half a dozen or so new trees in one area.  I am going to order them from Big Horse Creek Apple Farm so we get to choose from the good old varieties.

So, let cider season begin!  There are a lot of apples.  They are small but there are plenty of them.  We will gather the fallen ones for cider, and there will be plenty for making apple pies.  Tim has earned them.
Posted by SmartAlex at 9:01 PM