It's going to be a good gardening year.  I can feel it in my bones.  Or that could be the arthritis in my left knee.  One of the two. 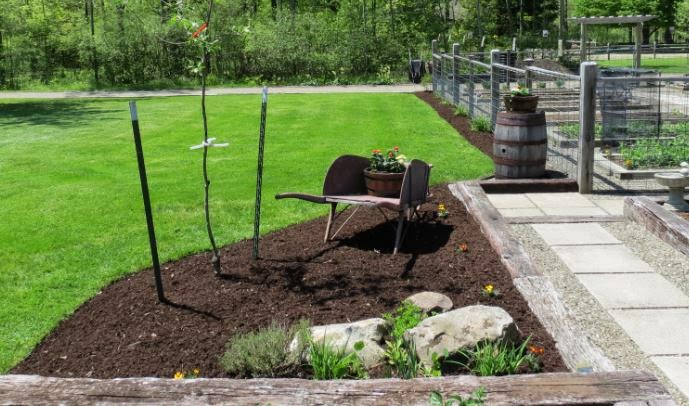 We've made a good start on the landscape edging and mulching.  I figured up one time that we have over 400 feet of edging.  That must be cut 8 inches at a time with an edging shovel.  That's 600+ stomps.  Then you get down on your knees and pull up the scalped turf, picking the weeds out and raking the remaining mulch to break up the hard crust.  Next comes the fresh mulch and more knee work as we smooth it all.  At the end of the day you know you did some work.  In the past we could get the landscaping done in a long day.  We now have too much and we don't try to get it done all at once.  We just start back at the beginning or at the most desperate spot and work our way through it over the weeks or months.   Whatever it takes.  And some parts need to be edged twice in a year if its a spot we walk by daily. 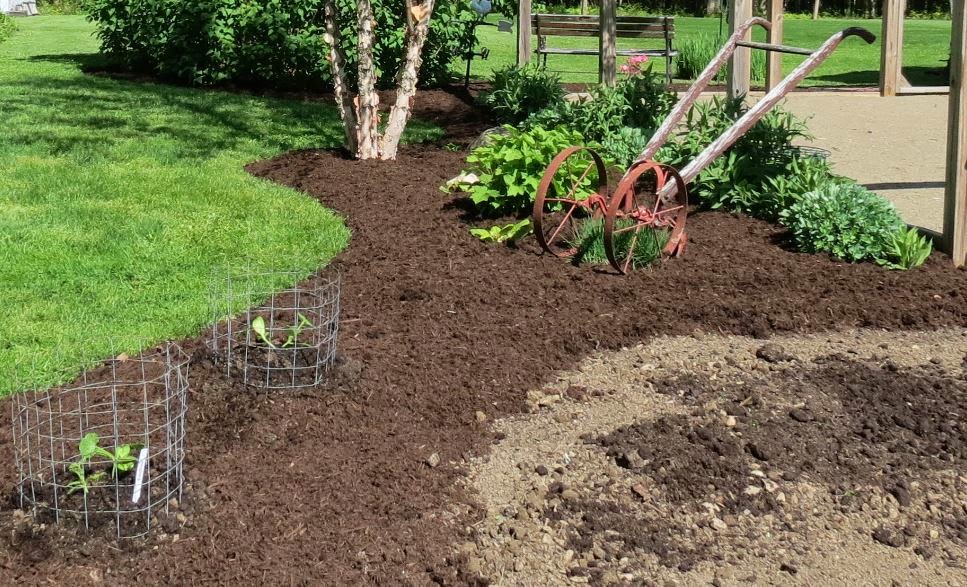 The landscape beds run into the planting beds outside the garden.  On the left are two hills of zucchini inside protective cages and on the right the bank is prepared for rows of sweet potato plants. 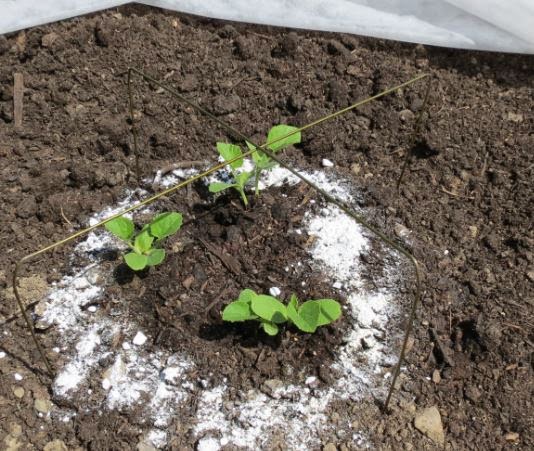 I have four hills of cantaloupe and watermelon.  I cut supports of clothes hangers and crisscrossed them over the hills to keep the floating row cover off them until they get a bit bigger.  The white ring is hydrated lime which is supposed to kill or deter stink bugs. 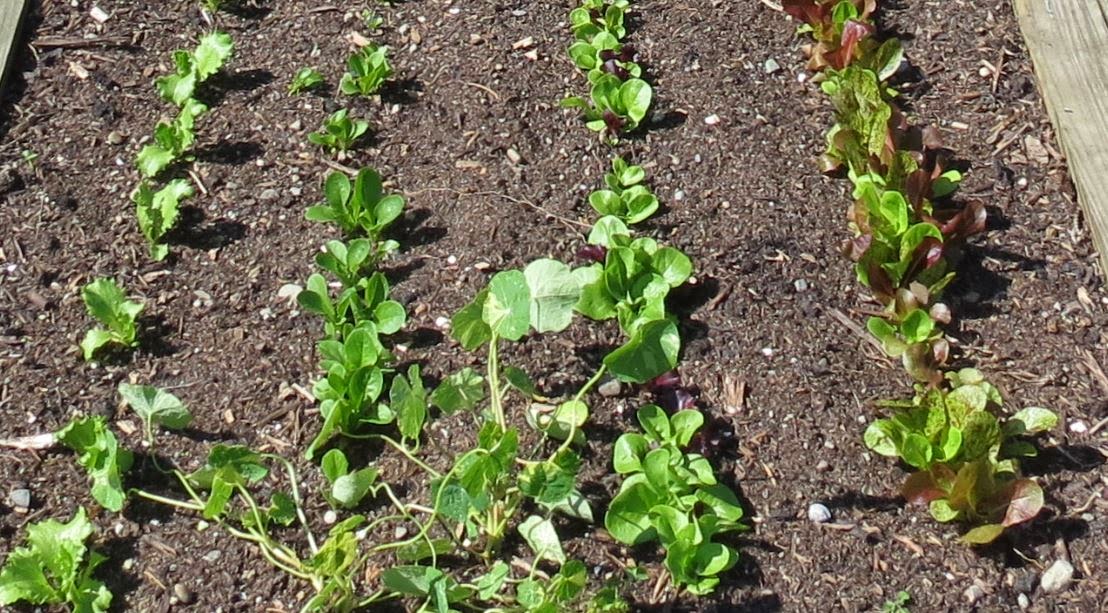 Inside the garden the lettuce is about ready for thinning for use in "micro" green salads.  That's a tangle of nasturtium in the center. 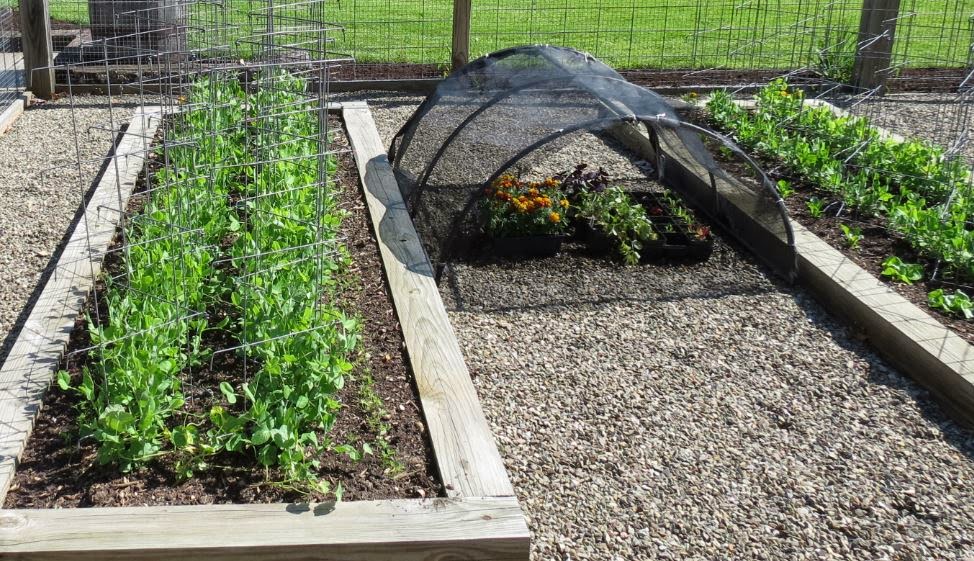 The peas are growing and I have plants hardening off under the shade cloth.

Inside the cold frame extra tomatoes, eggplants and peppers in various stages await new adoptive homes and flats of cucumbers, melons and zinnias wait to be planted out. The second planting of tomatoes are just getting their first true leaves.  I've proven in the past that tomatoes started May 1 and transplanted at the same time as the larger nursery transplants  will catch up and produce at the same time or earlier than their larger counterparts.  Most of the younger plants will be given away but I will plant at least two varieties.

Memorial Day is a bit early this year, but the forecast shows 7 days of 50*+ night time temps so the tomato/eggplant/pepper bed is amended and planted.  I also have an early row of bush beans in and the two beds are prepared for the black beans and cucumbers. 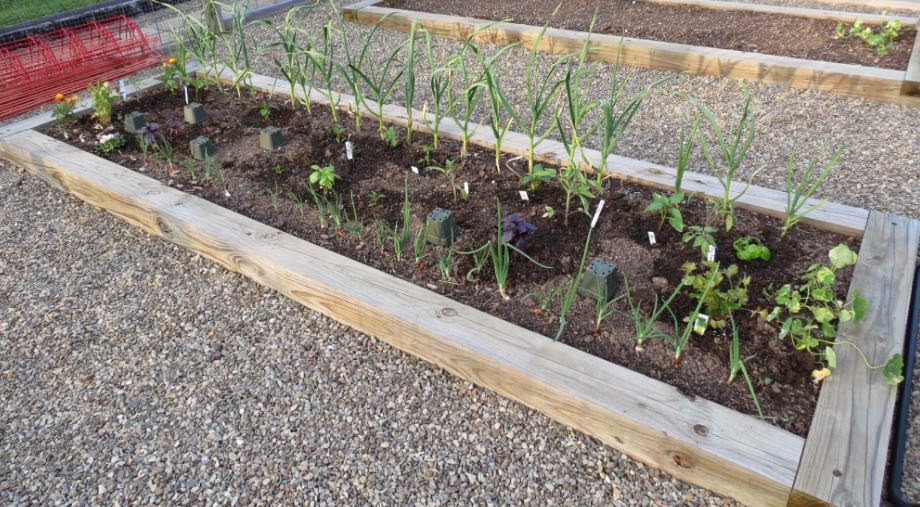 I didn't plant the egg plants yet because just as I was going to I realized that I was not in the mood to dig out and arrange the eggplant covers today.  The upturned pots are place holders for plants to be planted later. We're supposed to have scattered rain showers tomorrow which would be great for the newly planted plants.

All my annuals are in.  I have several whiskey barrels and planters filled with Verbena and Lantana and a flat of marigolds has been distributed from one end of the property to the other.  Besides being a nice plant, the marigolds are pretty much guaranteed to be unmolested by wildlife because of their strong smell so they are the first choice for unprotected plantings.