The Return of Spring - the Ides of March

It was a foggy, cold, dank March morning that smelled of Spring.  That is to say, it smelled of frog bellies, earth worms and skunk.  The Robins have made their first appearance, mingling with larger flocks of Starlings and riling up the Cardinals to defend their territories and scarce food supply.  They appeared as flashes of brilliant color against the shabbiness of the wet brush.  Tim and I (and many other locals) had gotten out of bed early to nurse our Spring Fever at the local junque auction.  We have been looking for a potato fork to replace the one I broke off under a frozen clump of horseradish last December.  But as with most things, you see them everywhere until you need one and then they are as scarce as hen's teeth. 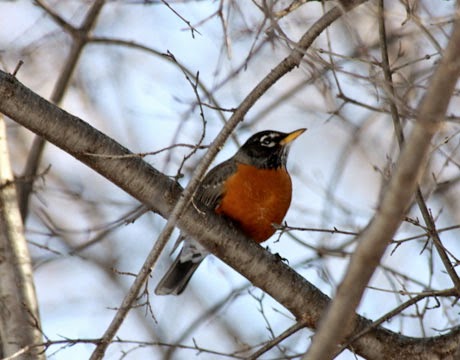 Tim and I wandered the tables of the auction house, surveying the loads of junk.  We love auctions like this, and if you ask me "are you a junk buyer?" I guess I would have to say "yes, I am" because the tables of junk hold a lot of things that look just like the selection at home.  We often wonder how many times these items make the auction circuit.  They are left behind in old houses, the flotsam and jetsam of past lives.  If you are a Hobbit fan, you will know that the term for this is Mathom :anything which they had no use for but were unwilling to throw away.


Or this junk just belongs there, on that shelf where its been for fifty years.  Why disturb it now?  Then someone gets tired of moving them one too many times and off they go to the sale only to be bought up by someone else and put back on a shelf.  I idly wonder about the people who buy thread bare Persian rugs and vintage Red Cross uniforms and then realize they probably buy those for the same reason I buy old tins and enamelware - just to have.   As I walk through our home, I look at pieces such as the ladies spittoon and the old crock and realize that we have them simply because they were here when we got here, many with their origins or importance lost to time.

But today I spy something I've actually been looking for.  Not a potato fork, something much less useful.  Something just to have,  A 1930s advertising tin that used to contain Campfire Marshmallows.  Yes, I was actually searching for a eighty year old marshmallow tin.  Specifically.  Because that's the kind of gal I am.  Our home is full of things from a different era.  Our porch contains every item needed to wash, dry and iron a day's worth of laundry the old fashioned way, but as yet I've managed to resist the urge to try.  Our dining room hales from the turn of the last century.  I've overheard our nephews, twenty-something professionals, talking amongst themselves saying that our house looks like something out of a magazine, and I hope they mean something good like Country Living or Flea Market Decor and not something like Hoarders and Junkmen.

So anyway, I had been looking for a Campfire Marshmallows tin to use as a base for a Christmas centerpiece (next year) and there it was holding a selection of baseball bats from rolling off a table.  I already collect tin containers, but usually they are green flour and sugar tins made specifically by Empeco Metal Packaging Corp.   When I saw a Christmas arrangement on Pinterest with a Campfire Marshmallow tin as a base I thought "now that is right up my alley".  But of course, I couldn't use one of my existing tins.  No, the true charm of this arrangement is the winteriness of the marshmallows, and the little marshmallow snowman faces in the arrangement.  The fun of this arrangement is that it gives me a reason to add a piece to my 1920s/30s tin collection!  The search was on! 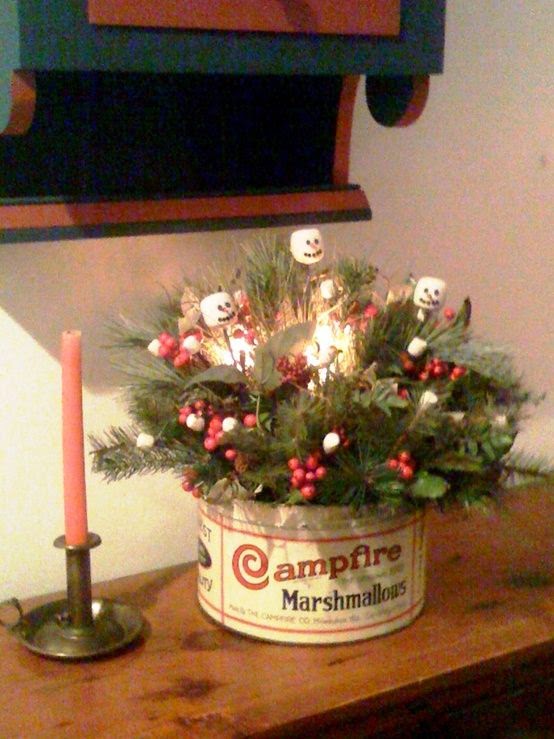 There are always five pound Campfire Marshmallow tins available on Ebay in a variety of ages and conditions at a variety of prices,  I was shopping for tins in the $20-30 range and expected to pay $10-15 shipping on top of that.  With that in mind, I would bid up to $25 and with the 20% buyer's premium and sales tax I would be paying full Ebay retail but have the tin in hand.  We waited a couple of hours.  Tim bought a couple of items.  We watched weighed silver sell beside tin toys and old tools.  It was a good place to pass the morning while the fog and drizzle outside masked the progression of the sun.  It seemed that their random picking from this table and that to keep every one's interest would go on forever, but finally, the auctioneer picked up my marshmallow tin.

There are a lot of buyers there that pick for their shops and antique mall booths.  The other half seem to be older retired men who stop by for some coffee and gossip, but bidding on the tin was brisk.  I started at $5, and three others jumped in by the end, but in a short minute it was mine for $25 on the dot.  Seems that everyone else had been doing their homework as well. So back to gardening.  You can only buy so much junk before you have to go home and get back to the business of growing food.  Last year I put my eggplants in damp paper towels on March 22nd.  This was because I was working with old seed.  This year I have fresh seed and I am looking forward to some beautiful eggplants this season.  This past week, on a warm sunny day (yes there actually was one), I got some potting soil out of the bin in the cold frame and put it in my potting bench so I could fill my pots in the comparative comfort of the garden shed this year instead of like last year, bent over the cold frame in a March snowstorm.
Today I happily filled pots, standing upright, under lights, in the "potting shed".  I left about a third of the pot empty, and put a layer of seed starting mix, a light weight, sterile medium, on the top to hold the new seeds.  Then I wet them down with a watering can and brought it into the house. 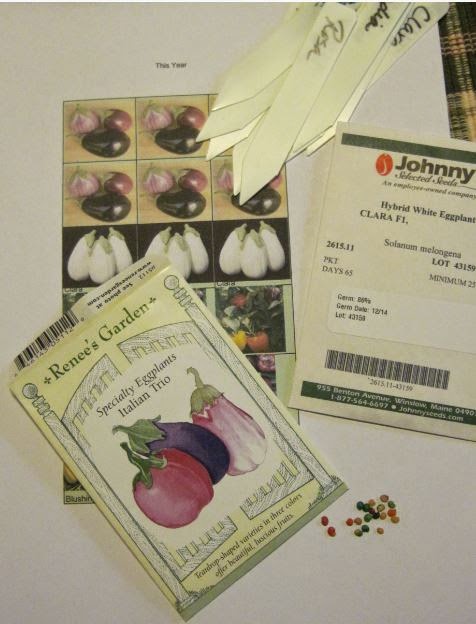 This year I'm simplifying things by using the Italian Trio of eggplants from Renee's Garden.  The clever thing about buying a mix from Renee is that she makes sure the seeds are color coded.  If you want two plants of each, you make sure you plant two of each color.  Simple as that.

My eggplants are now started, on a heat mat and under grow lights in the basement.  This takes up half of one flat.  April 1st I will fill out that flat with bell peppers.

Posted by SmartAlex at 1:18 PM