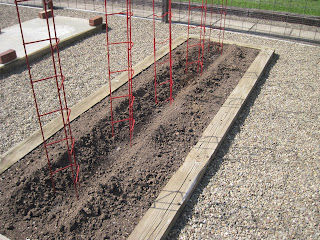 Considering the mild, rainy and overcast days we've become used to, today was a rather brutal day of sun and wind.  I had to throw a shade cloth over the cauliflowers but the potatoes are loving it and grew an inch since this morning.  This week's forecast is fairly mild and I wanted to take advantage of that, so it's time to transplant the tomatoes.  Yesterday I prepared the bed.  I added bone meal, worm casting and some light fertilizer and dug a trench down the middle.  I set my tomato ladders and I'm ready to go.  Seven weeks of daily attention, coddling and anticipation and it's time to leave them out in the elements.  I'm confident they can handle it. 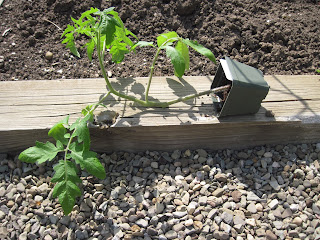 Yesterday I tipped the tomato plants over so the growing tips would curve up over night.
The spare plants spent the day in full sun and wind but these got a break from noon to four o'clock so they wouldn't be too beat up.  But at four o'clock I was ready to be done for the day and the clouds were moderating the sun so we were ready to go. 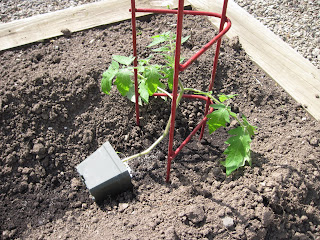 I lay the plants in the trench with the tips supported by the ladder.  I trimmed any leaves that would be under the soil and also shortened the branches that would be dragging in the dirt.  This left each plant with the growing tip and two branches. 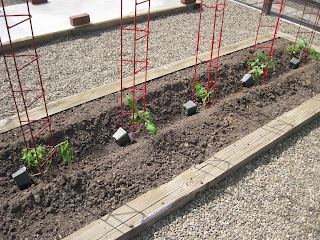 Now all that needs to be done is to slide off the pots and back fill the trench. 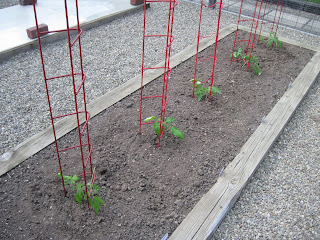 And just like that, twelve inch tall plants become six inch tall plants.  I watered them in very well and I will water again in the morning.  In the next couple of days I will plant the eggplants down each side and seed the nasturtiums.  Each bed will also get a marigold at each corner

Out of fourteen beds I have six left to plant.  Four of these need to be dealt with over the next week.  The last two can wait.  We finally got the lawn rolled and I've weeded all of the landscape beds but we haven't even begun the four plus days of edging and mulching.  And frankly, neither one of us is in a hurry. 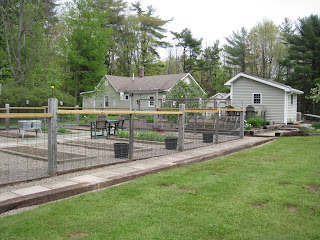 Posted by SmartAlex at 5:31 PM