This summer we are working on a very large landscaping project.  It is not yet ready for blogging but it entails planting a whole lot of ornamental grasses directly into our awful clay ground. 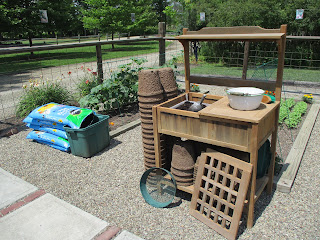 When I planted the dry creek bed a few years ago, I got the idea to plant the plants into large fiber pots and then dig the fiber pots into the ground.  This has worked out perfectly.  Some of the pots are already beginning to break down.  All of the plants are doing well.  If I want to replace a plant (I've juggled a few around and replaced annual varieties with perennials) I can usually just pull the entire root ball out of the pot and plop it into a different one. 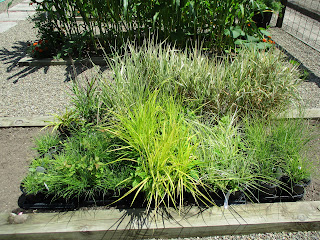 This project requires twice as many plants.  The basis is ornamental grasses, and I also have some shrubs in mind.  Right now I am taking advantage of half off sales at the local nurseries.  Last Friday afternoon I loaded thirty gallon sized grasses into the back seat of my car and then the next morning we went back with the SUV and loaded six two gallon sized grasses. 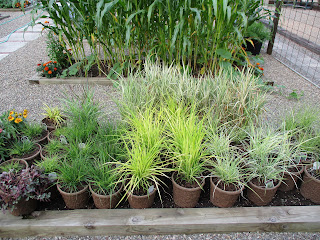 I brought my potting bench into the garden and staged all of my pots and potting mix, and after several hours of potting I turned 30 potted grasses into... 30 larger potted grasses.  I like to have them in the garden for a week or so where they are easy to water and any loose soil that overflows just goes into the empty bed.  This next weekend I will begin toting them around and working on my layout.  Then I have a lot of holes to dig.
And I just took a mental walkabout and made a list of about 20 perennials I already have either potted up tucked in a corner, or out of place in the existing landscape that need to be rounded up and potted up.  And that doesn't even included the six daylillies that need to be divided. 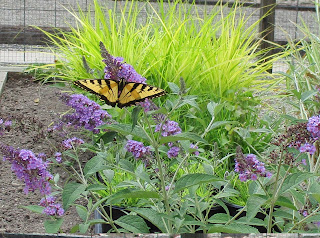 In addition to the ornamental grasses, I've picked up about a dozen perennials for starters.  The bees and butterflies are really excited about them.  In fact a few of them might have ridden over in the car. 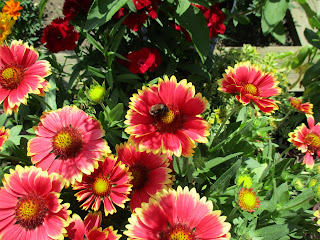 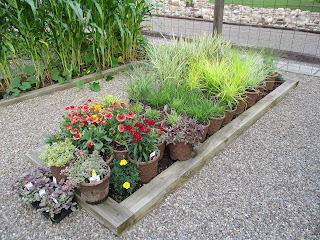 Meanwhile, in veggie-world:  I had to pull the last of the lettuce which I had left shading the roots of the second planting of cucumbers. 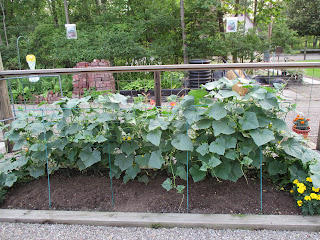 The plants are loaded with cucumbers but I couldn't see them to pick them!
I'm picking about 3-5 cucumbers a day 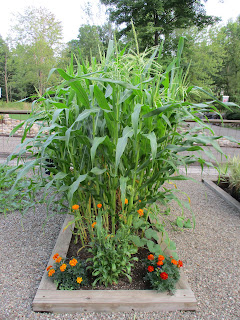 The second planting of corn is tasseling. 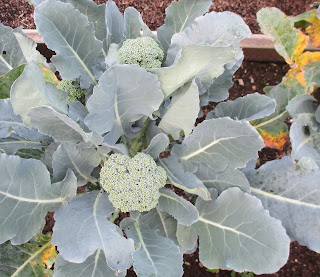 I'm getting good side shoots from the broccoli and as much cauliflower as we can eat. 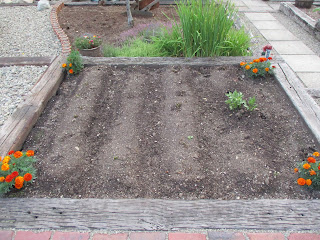 I cut back the old potato plants.  They did not bloom this year.  We've eaten a few potatoes but I will leave these in the ground for awhile instead of trying to store them. 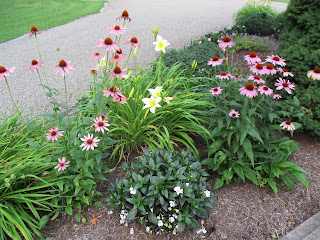 The Sunpatien and Begonia pots that I sank into the front landscape are growing well and are on the verge of a ton of blooms.  I pruned these back severely when I transplanted them.  They have been blooming steady, but not profusely.  I can't wait until all of those buds open at once.

Posted by SmartAlex at 8:07 PM