Where to put the tater patch?

There is a part of me who thinks that my garden is just a little too fussy and structured, and longs for a row to hoe. I guess you can't take the farm out of the girl. So I was pretty happy when Tim decided he wanted {me} to grow potatoes this year. He has the posts for the chicken fence in, so we can see what is left to landscape, and he asked if the slope on the other side of the water tank would be a good spot. Yup. Good enough. Since everyone in the Northeast has been waiting for the ground to dry, there were still plenty of seed potatoes to be had, so we undertook to farm... 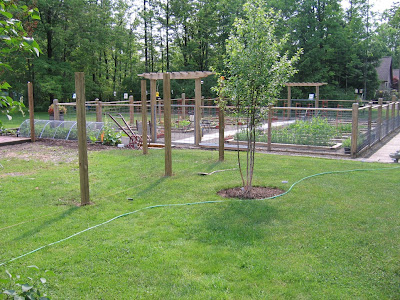 Step #1: Make a plan. We are going to edge and mulch along the new chicken fence, and plant some of our "leftover" perennials, which means we need to decide on the shape of the bed for optimal ease of lawn mowing. We laid a garden hose out and moved it around until we were both happy. Then we marked off what part of this new plan would allow for the potatoe bed, and cut in that edge because if there's anything I can tell you about our landscaping plans is... "they change". 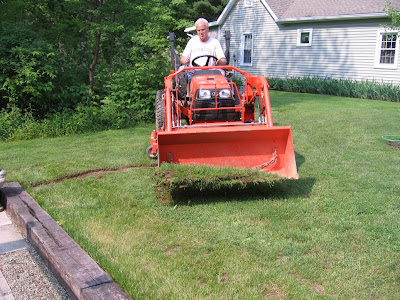 Step #2: If you have large tools (i.e. equipment) use it. I can't imagine stripping all this sod out by hand. I also can't imagine weeding if we just turned it in. Tim and I deliberately tried to ignore how many times we {he} have stripped, replanted, watered, and sown grass seed on this particular spot. This sod went straight over to the side yard where it will be used in the finishing off of the septic field which has been sitting bare headed waiting for the rain to stop long enough to be graded with the tractor. 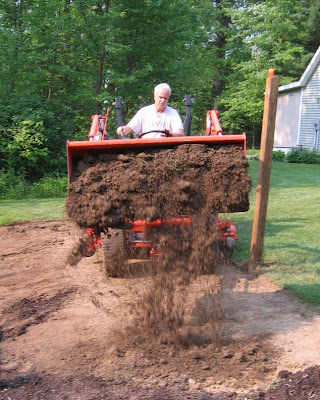 Step #3: There just isn't much "top soil" on this bare slope. But not to worry, we always have a pile handy from our last change of plans, so Tim brought in some old garden dirt to add. I imagine I will have to bring more in throughout the hilling process. 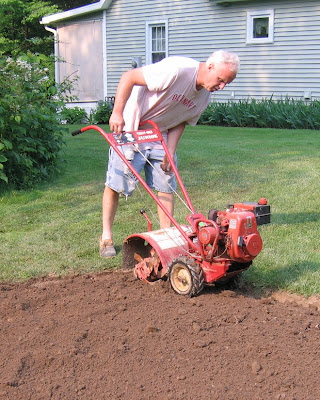 Step #4: Quick Question: why does a machine work fine when you put it away in the fall, and then refuse to cooperate in the spring? Gremlins? Alas, there is always a reason, but it isn't always apparent. In this case it was as simple as a dried out belt and 10 minutes later we were in business. I'm always happy to have Tim try out the machinery first. It saves me from explaining why it doesn't work and it's not my fault. 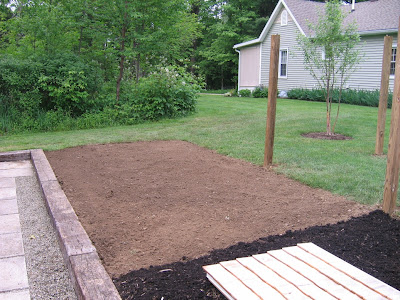 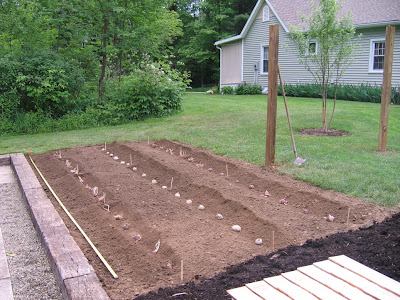 I measured out my potato rows and carefully placed the seed potatoes, two eyes per tater, sprouts up. I had a few left over, but if we have a good year, this little patch ought to keep us in potatoes all year. The row closest to the RR Ties is an early red called Norland that we can use later this summer, and the other two are a red (Pontiac) and a white for storing.


After Tim spent a few hours stripping sod and tilling dirt for me (if I had done it myself dinner would have been way later than 8pm) he finally got back to his original project. 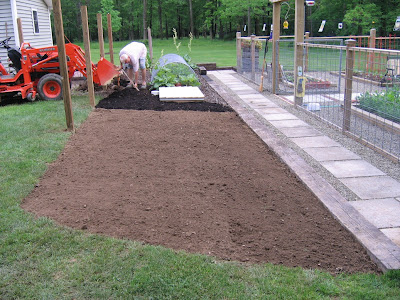 It seems most of the rain water was diverting down the over flow. So Tim dug a big hole and cut his plumbing apart. Turned out that one of the water inlets was close enough to the Y that goes to the bypass, and it was swirling in just right and heading itself right back out the divertor. Tim decided to raise the over flow line high enough that the entire line would have to back fill before it diverts (Unless we have the valve closed for winter). This resulted in a last minute trip to the hardware store, which had just closed. Undaunted, he took off across town to the big box store hoping to get things fixed and closed up before the hole filled with rain water. By the time he got back, it was already raining so when I looked out the window he was standing in the hole under an umbrella watching the water swirl. He ended up using all parts he had on hand and I got the pleasure of returning everything to the big box store.

We spent the whole day digging holes, stripping out carefully planted grass, moving mulch around, undoing and re-doing. Isn't that always the way it is? But we're pretty happy with the tater patch, and we're hoarding rain water again. All is well. Tim thinks I will have to hill my potatoes with my old fashioned hiller. Hmmm... I wonder if it will be as tempermental as the tiller? We shall see.
Posted by SmartAlex at 7:44 PM