When I was little I remember well my father seeding flats in the seed room of our greenhouse.  It was a humid little room with plastic curtains around the benches to hold the moisture, and a misting system that passed over the benches a couple of times an hour.  He started with a full tray of seed starting mix which he scored in rows by pressing a piece of plywood with rows datoed into it every two or three inches.  He would place the seeds very close in their rows.  What you would end up with is one tray of a couple thousand seedlings shoulder to shoulder. When they were ready to be transplanted you could reach in with your fingers and scoop a chunk of seedlings out and set them out where their roots could easily be teased apart for individual placement in their big boy pots. It conserved space and enabled you to repot them however you wanted without risk of damage.

When I started seeding my own vegetables at home (in the dining room) I went through the learning curve every one else does.  I did invest in a nice set of grow lights which weren't particularly cheap but have lasted ten years and still going strong.  I started with the Jiffy peat pellets which were a PITA.  You can't get the seedlings out of the pellet if you have to replant them deeper.  They're locked in there as if they had concrete shoes.  And the mesh that holds the mix together never fully disintegrates, and you will find them in the garden months later still wrapped around the roots. 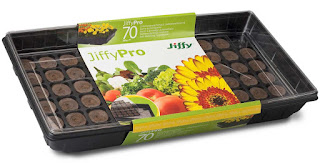 Next I tried seeding directly into pots.  That system was somewhat flawed as well.  If you place one seed in each pot, and the one seed refuses to grow, you have to reseed.  Then that one pot is behind all of the rest of the seedlings so it still needs a dome and constant moisture while the others are moving on.  So I tried placing more than one seed in each pot.  Then you have to thin them because both (or even all three) come up.

The best way to thin them is to snip off the weaker one with scissors so you don't damage the roots of the one you're keeping.  But what if they're both really nice?  And you have that empty pot from the one that won't germinate.  So... you go get a pencil and uproot both of them so you can replant the one deeper, and fill your empty pot.  So.... again, why are we seeding directly into pots?  If we have to play musical pots? 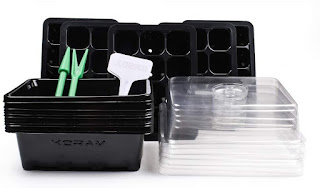 Then I went back to my roots so to speak. I bought bottom watering cell packs.  Don't let the cells fool you.  I don't use those or at least not at first.  You start with the solid trays and the domes.  Fill those with seed starting mix and seed little clumps of seedlings.  Put the humidity dome on, and put them under a grow light on a heat mat. 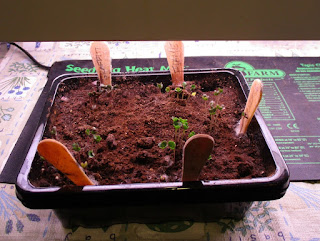 A lot of people struggle with the logistics of the whole light and heat mat thing.  Yes, you are right to think that they don't need the light while they're germinating.  And no, they don't need the mat after they start growing.  But that doesn't mean you have to juggle things around.  If you start with both a light and a heat mat, then the first ones to pop up get the light and avoid getting too leggy while they're waiting on the stragglers.  They won't mind having warm feet and a humidity dome.  Although they'll soon out grow the dome.  When that happens, take the dome off and turn off the mat.  No need to rearrange anything.

Besides having heat mats, and grow lights, another requirement is a small fan and a timer to run it.  Giving your seedlings a shot of wind several times a day will stress them just enough to toughen the fibers in their stems.  It also encourages them to stay shorter and stockier.  I'm not sure how they know but they do.  And you want a timer for consistency.  Yes, you could turn the fan on once a day for half an hour but would you remember to turn it off?  I set mine for three half hour increments throughout the day.  I also have the light on a separate timer which turns it on at 6 am and off around 10 pm.

In addition to strengthening the stems, a fan improves the air flow so you get less mold.  But if mold is really a problem, just sprinkle your starting mix with cinnamon after you plant your seedlings and you won't have any mold.

Another consideration is that you have to plant like items together.  I found out years ago that if you put tomatoes and eggplants under the same humidity dome you are quickly going to run into a conflict of interests.  The tomatoes will be on their way out before the eggplants have even germinated.  And if you have them somehow connected in packs then you have a problem.  Take good notes of what happens this year.  Now I plant eggplants and peppers together or eggplants and cauliflower, because they are like-minded plants keeping a similar schedule and they need a least two weeks longer than tomatoes.


As for what is going on in the garden today:


Rough winds do shake the darling buds of May

And its snowing.
Posted by SmartAlex at 4:15 PM