I've always like Dahlias.  It started with the little Figaro dahlias that are grown as annuals.  These grow quickly from seed but don't store real well (because they are small tubers) for the next season.  Thus it is easier to pick them up in six packs every year and start over.  When I began to think of Dahlias as a more long term investment, the natural choice was the dramatic dinner plate sized flowers.  I started with those back in 2018, just ordered a couple of mixed bags from various large scale flower catalogs.  I still have a few from that first, random selection, but, like a wine drinker, my tastes have evolved.

Over the past few years I've gotten better at caring for and storing Dahlias so I feel more confident in spending some money to develop my collection.  And while dahlia tubers can multiply out of control I have learned not to save everything just because I can.  I cull tubers quite cold heartedly to keep the number manageable both in storage and in replanting. 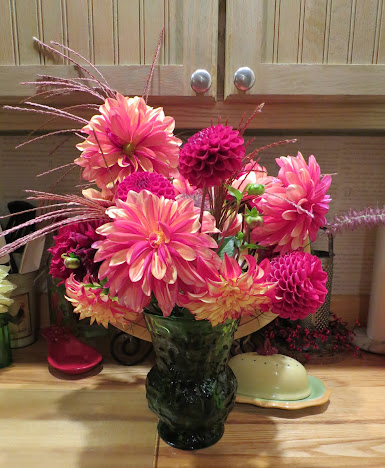 I used to never bother to cut the blooms and bring them into the house.  I enjoyed them more outside in the landscape largely because I spend so much time out in the garden each day. Then I started cutting them before a change in the weather so the blooms wouldn't go to waste when I was not out in the garden as much and so large, wet blooms would not break down the plants.  Now I am learning to enjoy the cut flower goal, it has influenced my choice of varieties.

Firstly, dinner plate sized flowers aren't easy to arrange.  They have, by necessity, much shorter, thicker stems.  And they tend to shoulder out the smaller flowers and overwhelm a bouquet.  They are still nice to bring in one at a time just to admire, but they don't play well with others.  For this reason I am more interested in the mid-sized blooms, as well as a wider variety of shapes and textures.

Dahlias come in so many forms from tightly arranged ball shaped blooms to wide open blooms with a structure similar to water lilies.  Some are small with open centers.  Some are irregular or have rolled petals that look like a prickly cactus flower.  Growing a wide variety of bloom shapes and textures makes them more fun to arrange into a bouquet.  As well as more challenging.  I need to hone my flower arranging skills.

I also prefer varieties with blooms that have a lot of shading or which change in color as the bloom matures.  And I gravitate towards the bronze or copper color palette or the juxtaposition of pink with orange or yellow on the same petal.  With these things in mind, I am slowly revamping my dahlia collection.  These are some of the new varieties I have ordered for spring with those colors in mind.

Additionally, I am replacing some colors with smaller blooms.  Instead of the giant Kelvin Floodlight I am trying a medium sized yellow called A-Peeling.  Last year I had a giant twelve inch white called Iceberg.  I saved the tuber but am trying a six inch white called Center Court.
Finally I am trying a few dramatic ones including a near black (which may turn out to be just dark red) called Lights Out.
Dahlia growers range from people who pick up a few tubers each spring at a big box store and grow them as annuals to people who cross them, save the seeds, name new varieties, and sell the extra tubers online.  I have seen storage setups from a box of unwashed tubers in the corner of a garage, to elaborate walls of shelving containing individually labeled tubers.  Even refrigerators to keep the right temperature and humidity for people without root cellars or unheated basements. 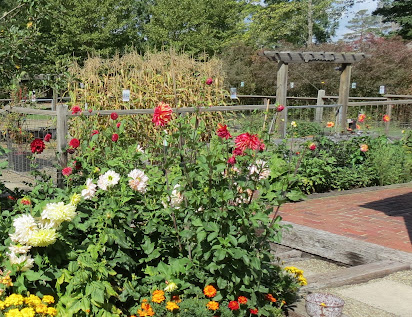 There are people who struggle with soil conditions, diseases and support systems and people like me where they seem to be very little trouble at all.  I prepare my soil, and plant them carefully, then they require very little care other than deadheading until the day I begin to dig them up in the fall.  Last summer was the driest summer since I began gardening and I watered the dahlias a total of one time and that was only to finish emptying the water tank on the day we cleaned it.
If Dahlias are something you would like to try in your garden, keep in mind that they are addicting.  The Dahlia Growers Facebook page is full of very passionate people who plan their winter shopping around online sales which are announced ahead of time where popular varieties sell out in minutes.  Dahlias are an old favorite that are becoming newly popular with the thirtysomething crowd. They just have to have an example of all of the names they've seen online. I call it The Dahlia Wars. I think that takes some of the fun out of it.  Just buy a few and see how they do.  You can always buy new ones next year.
Posted by SmartAlex at 12:26 PM