Since garden season is pretty much over, I thought I'd branch out into other home keeping type subjects. Today I'm cooking. I've made ham and bean soup off the bone from last Sunday's dinner. I have spices steeping for Swedish Glogg, and cookie dough chilling in the fridge. I'm making my grandmother's molasses cookies. I wrote this story last Christmas, but I thought it would be a good time to share it...this time I only made half the recipe!

So my mission, is like so many women before me... to keep the traditions alive. I've been longing for some of Gramma's ginger cookies, so I thought for Christmas, it would be nice to make some and share with the family. Actually, I did not consider sharing until I read the recipe. Now I realise it will not simply be an act of family tradition, but a necessity.

A couple of weeks ago, I asked my Mom to find the recipe. She promised she would. She also said she had a tub of Lard I could have. Lard? I don't really plan on using Lard. "Well, they won't be the same without the Lard".
I gave it a couple of days, contemplating the thought of baking cookies with Lard in the year 2008. After much thought, I relent. "Alright fine, give me the Lard." Mom smiles knowingly "Good thing you have the Kitchenaid.”

Today, I am happily off work and snowed in. 5 days 'til Christmas. It’s a perfect day for baking. I had already read the recipe and bought supplies accordingly. In addition to the Lard, I bought a second bottle of Dark Molasses, in case one wasn't enough, 5 pounds of unbleached flour, and an extra jar of Cinnamon.

I wrestle the Kitchenaid out of it's cupboard. WHY do I keep this monstrosity over the refrigerator? Oh, I remember, it's the only cupboard large enough. I jockey it over my head narrowly missing the blades of the ceiling fan thinking...”why don't I remember to turn that thing off? Remember what happened to the toaster?”

I start with the lard. 2 cups. My kitchen now smells faintly of bacon. Suspiciously, I scrutinize the ingredients on the pail of lard, but it does not reveal what I already know to be true. Lard is pig fat. Granted, it has less bad fat than butter, while it also has more than twice as much good fat than butter. Still, this does not look (or smell) like the beginnings of a cookie recipe. I glance over my shoulder to make sure my husband is still out plowing. I would hate to have to explain putting bacon grease in the cookies. 1 1/2 cups sugar, 2 eggs, cream... now the Lard at least looks better even if it doesn't smell better. 2 cups of dark molasses. I was right, 1 bottle only has 1 2/3 cup in it. Should this stuff come in gallons? Open the second bottle. The smell of Lard is soon overcome by the molasses. My kitchen no longer smells like bacon, it smells like the feed mill.

1 ½ cup of unbleached flour mixed with 2 tbsp soda, 2 tbs cinnamon (am I reading that right? Tablespoons?) open the second jar of cinnamon. 1 1/2 tbsp ginger, 1/2 tsp allspice, 1 1/2 tsp salt. I mix that in and warily eye the mixing bowl. It is now dangerously full of batter. Yes, Batter. And the next step is 2/3 cup boiling water. This ought to be good. Although I pour slowly, the Kitchenaid, in it's usual display of bad temper, splashes boiling brown batter on the wall and floor. THAT looks yucky. I leap for the paper towels before my husband comes in to see what looks like...well you know... all over the floor.

Now comes the rest of the flour. I am supposed to add 7 to 9 cups to texture. I dump most of the 5 pound bag of flour into a large bowl, and I can't see how 9 cups of anything are going to go into the already full mixing bowl. I get a scrap of paper and a pencil and start making hash marks to keep track of how much I've put in. Amazingly, through some phenomenon of science, the flour does not increase the volume of the batter. It disappears willingly into the brown soup . The viscosity changes from batter to something more closely resembling dough.

The Kitchenaid groans. It's been through this drill before. It knows what's coming. I keep my hand on the top, testing the temperature of it's motor as I add flour. At 7 cups (8 1/2 total, because we already put some in earlier) the dough reaches a familiar consistency. It has been over 25 years since I stood on a stool in the farm kitchen and watched this dough being made, but I remember it well.

Finally satisfied, I scrape the sides and the beater and set the bowl outside on the porch to chill. I turn my attention to my exhausted mixer and the counter. Not bad. Besides the batter-spatter incident, all went well. There isn't even much flour to clean up. It actually ALL went in there. The Kitchenaid stands on the counter panting from its exertions. I consider bathing it with Vetrolin and throwing a cooler over it for an hour. A thorough sponging with plain hot water does the trick. It will survive and be ready for the peanut butter balls later.

I pause to collect my thoughts. The dough will need to chill at least an hour, then I will roll it into balls and press it with the sugared bottom of a glass to press each cookie down, and place a raisin in the center of each. The recipe doesn't reveal how many dozen it makes. We'll have to wait and see. I'm sure it will be enough to share with the rest of the family. Those old farm wives didn't mess around. They made enough for a whole farm crew all at once.

I turn my attentions from mixing to baking. I preheat the oven. The recipe says 350 degrees 8-10 minutes and DON'T burn them. Burnt ginger cookies are no good. The recipe actually says this. A little trial and error and I settle on 9 minutes. I roll and press, remembering to double strike them to get extra sugar on them. Soon my hands begin to resemble Gramma’s. The fingers are red and overall, that familiar sheen of… Lard. They are soft cookies, and not burning the bottom means they will still be soft when you take them off the sheet.

After 4 dozen I perfect the technique of getting them off the sheet without smooshing the sides and only have to eat four rejects. After 5 dozen I am considering putting the rest of the dough back outside and saving it for another day. After 6 dozen I lose count and begin to run out of room on the dining room table. Out of necessity, I stop eating the rejects. After 7 dozen I decide I’ve been on my feet all day and the peanut butter balls can wait until another day as well. The Kitchenaid goes back in the cupboard clearing more space for cooling cookies.

My memories don’t include acres of cooling cookies. How was this accomplished in that tiny kitchen? After 8 dozen I am looking at the rest of the dough and figuring maybe I should just throw it out. I scrape the last from the bowl and do a final count. Including the ones I broke and had to eat, 106 cookies. That's 8.8 dozen. Whewww! Most recipes make 3 to 4 dozen. They are sort of pretty all laid out on the table. Their sugary tops glimmer in a Christmasey sort of way. I think back over my childhood. Gramma almost always had these cookies in the jar. I would guess she made a batch like that once or twice a month. If she didn't make these, it was peanut butter cookies. What a lot of work. But completely worth it. 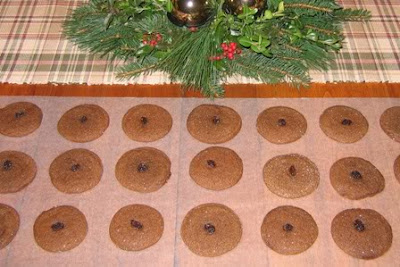 Posted by SmartAlex at 6:22 PM