Last Saturday, when I was sorting through my tomato plants to find the ones I started for my mother and father, and untangling the inevitable jungle of leaves, I heard a *snap*. EEEeeekkk! It was the nicer of the two Ananas Noir. My favorite! The plant had snapped half way through.

Since an experienced gardener knows there is an appreciable difference between "nearly dead", and "really most sincerely dead", I braced it up, watered it and stuck it aside making a mental note that if I had time it probably should be transplanted deeper. Monday I noticed it was giving up and beginning to wilt. I decided to go ahead and transplant it again in a deeper pot. Unfortunately, in the process, it snapped all the way through. So here I had 18 inches of completely wilted Ananas Noir with *gasp* no roots. But, there were 3 or 4 root nodes begun just above the break.

So I filled a 2 gallon pot with the Moisture Control soil, buried it up to it's neck, filled the pot with water, and put it in the shade. It looked rather improbable as is drooped lifelessly against the rim of the pot, the leaves the consistency of boiled spinach. But I had nothing to lose. Yesterday I noted that it had not wilted any further, and perhaps had improved just a bit, especially in the lowest branch. This morning it was standing up on it's own, cheerily waving it's leaves around in a morning greeting. I probably should have taken a photo of it in it's most wilted state, but I thought it might not be something I would want to remember. And here it is this evening... 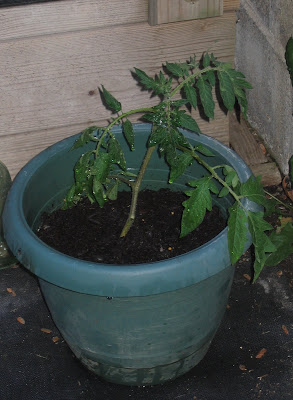