I don’t know about other gardeners, but I have dreamt of having a garden that was so manageable in size and construction that I could experiment with the finer points of gardening rather than battling the elements. Which is to say, I’ve always thought how nice it would be to putter around with compost and pruning rather than spending my time and energies on tilling the walks, raking the rocks, pulling weeds by the bucket load, and surrendering to insects and blights. Well, thanks to the convenience of my new raised beds I have advanced to mulching!

When we put in the beds, we put a thick layer of composted horse manure on top of the soil. Through transplanting and such, some of the beds ended up with most of the compost mixed in, and the soil on top. Those areas have been producing many more weeds than the areas which still have a thick layer of compost. So I have been mulching them. And it’s FUN! And it makes everything look like it has been freshly re-carpeted.

The benefits of mulching are to keep the weeds down, moderate soil temperature, and keeping the soil from drying out. Also, it prevents diseases that can be transferred from the soil when it splashes up onto the plants. Some of the benefits of compost are that it provides microbiotic nutrients often missing in synthetic fertilizers, and improves the soil structure. So, mulching with compost is the best of both worlds.

This is my routine. I head out to the compost pile with a wheelbarrow, a potato fork, and my handy dandy grain sifter. I put two scoops of compost into the sifter, and sift away, throwing whatever is left into a hole in the top of the pile to be composted further. This leaves me with lovely smooth compost to mulch with. This manure has been turned weekly for two months and has stopped working and is now cool and will not burn the plant stems. 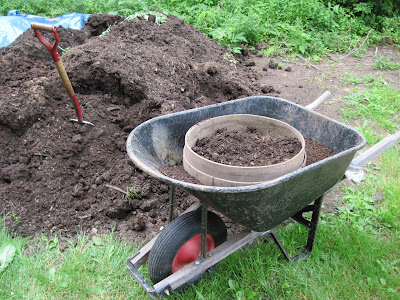 The freshly weeded bed prior to mulching, with the bare soil exposed. 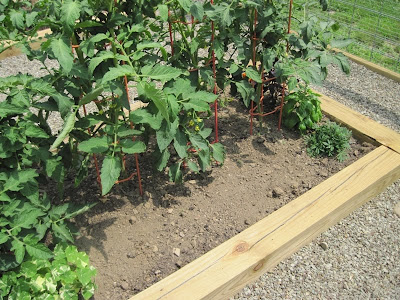 And the same spot 5 minutes later with a layer of compost freshly applied. Doesn't it look nice? 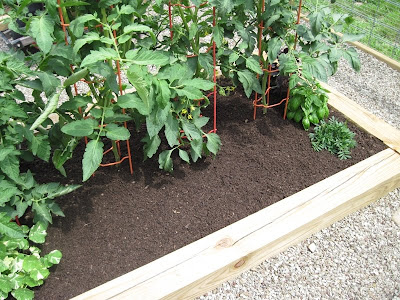 In the squash bed I also made use of some old hay. This hay has served many purposes. It was a late cutting taken off the fields to provide bales for the public to sit on during our local Apple Festival. My uncle said if we needed some mulch hay to have handy, would we be so kind as to swing by after the festival and pick this up. This batch was first used in the lawn to mulch grass seed where we dug up to put in the drain lines to the water tank. After being dried in the sun, and raked a few times, it has broken down into short pieces which were perfect for mulching around the summer squash. 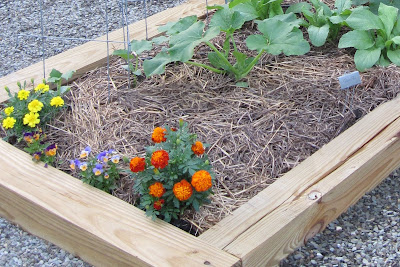 I love this grain sifter. I could have built the same thing with some scrap lumber and a piece of hardware cloth. But, I remember there being a sifter just like this in the dirt room of the greenhouse that I grew up in. We were unable to find the sifter before the greenhouse was torn down, so I kept an eye out on Ebay and found this one which was picked out of a barn in the Pittsburgh, PA area. Whenever possible, I prefer to find useful gardening collectibles. It feels better. 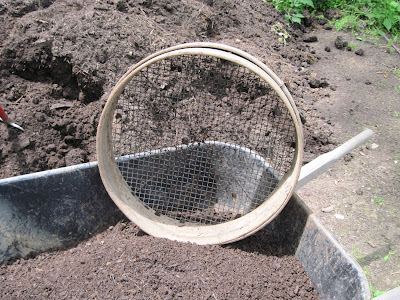 Speaking of gardening collectibles, and the Greenhouse.... this little dibber board was one of my favorite items. As mentioned before, the greenhouse was torn down some 8 years ago. My husband and I had already picked through the vast mountains of Junque which the last owner had accumulated but I couldn't find the dibber. I looked, Tim looked, the owner looked. Even my mother went on several salvage missions and she couldn't find it either. Finally, on her last trip, the week the houses were to be demolished, she and the owner were making one last tour, and there sat the dibber on top of a pile, under a bench in the sales room. This dibber was from the days prior to individual cell packs, when the packs of annuals were planted in packs of 6, 9 or even 12 and had to be cut apart with a knife. This would be pressed into each pack providing holes to transplant the seedlings into. Although it was always hanging about on the front lines, everybody usually just poked holes with their fingers anyway. Still it was one of my favorite objects and it holds a special place in my garden collection. 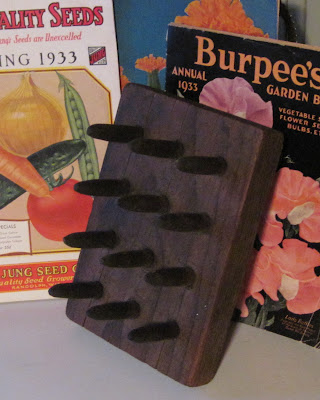 My mother also has a large flat sized dibber board which is missing a lot of it's pegs. It must be a trendy sort of little item though, because Martha Stewart has one.... 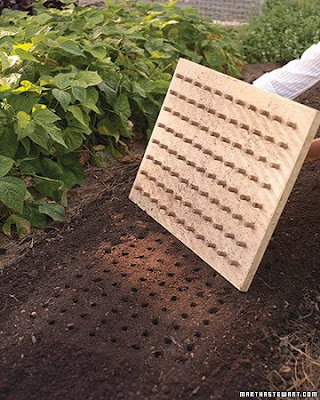 Posted by SmartAlex at 5:13 PM