My father and Stepmother are on vacation for a week.  Dad asked me to check on his garden.  He said the rest of the kids had been invited to come and get zucchini.  Since I already have my own zucchini control problem, I told him I would check for out of control squash and feed them to Mom's chickens. 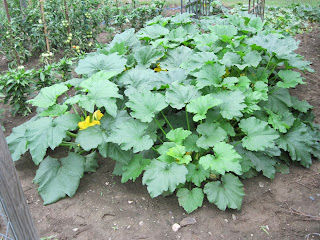 His squash plants are gorgeous.   But there sure are a lot of them...eight maybe?  For two people?  That's a lot of squash.  There were three good sized squash tossed just outside the fence waiting for me.  I approached the jungle with trepidation. 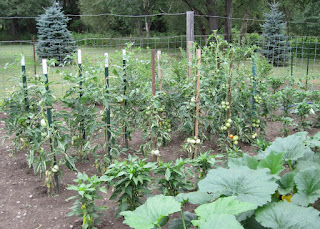 Now I know my father has gardening discipline.  Just look how well trained, pruned and staked his tomatoes are.  Mine generally look like a jungle (I take after my mother) but his are the most well tended plants I've ever seen.  And there is not a weed in sight.

I peered under the leaves. There was a nice sized squash right there, still shiny and fresh. It would be good for a day or two, so I passed it up just in case one of the stepbrothers thought they might make zucchini bread this weekend. Nearby was an overgrown one. Good, I thought, a treat for the chickens.  At least I would have something to surprise Mom with.  The next plant had two more.  Hmmmmm.... 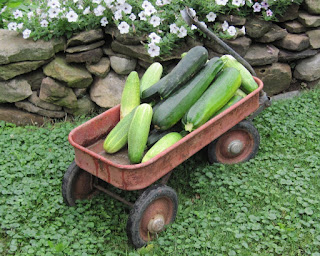 As I picked, I heaved them over the fence into the lawn and began making plans for getting them out of here. The heavy canopy of leaves, and the darkness of this variety made it hard to distinguish them.  I continued to poke and prod.  And I realised, with a sinking feeling, that they were getting bigger.  Some of them required two hands to twist off and made a sickening hollow thud as they hit the ground.  What kind of nut, plants 8 zucchini plants, then takes a summer vacation?

Reaching the end of the zucchini patch, I straightened up and looked around.  Uh Oh.  There, at the end of a pepper row was another lone zucchini plant.  This one wasn't as large, but what it lacked in size, it made up for in production.  And right next to it was a tidy hill of cucumber plants.  I could see right away I had a problem here too.  Since leaving mature fruit on the vine will discourage a plant from producing more, I felt obligated to remove them.  The cucumbers were bloated by the rain, and there were a lot of them.  I picked about a dozen of the worst ones, and flung them to the end of the garden too.

Now I had about two bushels of squash and cukes to deal with. And for that, I was a bit unprepared. With a sigh, I hiked back up the hill to my car for a tarp and a canvas bag. I rounded up all the zukes and stacked them in the tarp like cord wood. The cukes I wiped off and filled a canvas market bag. Then I bundled it all up, and headed around the corner for the farm. I backed my car down the driveway, popped the trunk, and called to my mother "bring your little red wagon". I proudly lifted the trunk lid and showed her my little surprise. Then I posed the question to her: "What kind of nut plants 8 zucchini plants (for two people) then takes a summer vacation?" She actually knew the answer to this question. "The son of a southern farmer. We need a pig."    Ah, so that is the complete answer to the question:  The son of a southern hog farmer.  Makes total sense now. 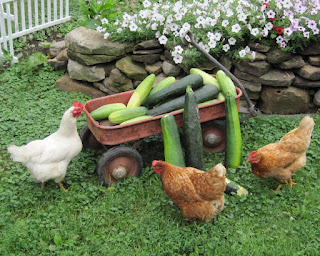 It didn't take long for the pet chickens, who free range all the time, to notice there was a visitor and assume there was something in it for them.  Within minutes, Peanut, Grandma and "white hen" had arrived to examine the harvest. 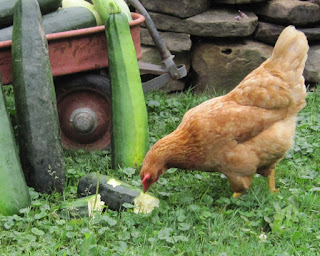 Although they began pecking at them right away, Mom broke open one squash to give them easy access to their favorite part.  The seeds.  "Just think" I said to Mom, "you're going to have green chicken poo on your porch for a week."

But, for those of you who do not have a flock of chickens or a pig to devour your excess crops.  There is always zucchini bread.  I have my first batch in the freezer, and I finally got to use last year's Christmas present from Mom and Richard. 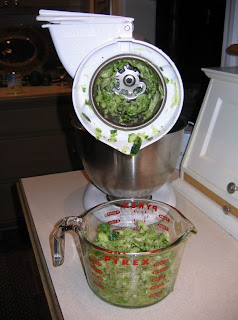 Beat together the eggs, sugar and vanilla.  Sift together dry ingredients.
Add the zucchini and pineapple to the egg mixture, then slowly add the dry ingredients.
Grease and flour bread pans and leave about a third of the pan as head room because this is more of a cake batter than actual bread.  I used 4 small loaf pans and a mid-sized pan.  I think it would fit into two large loaf pans.

Bake at 350* for about an hour.  Since I use many smaller pans, I baked for 55 minutes.
Enjoy.  This is the only way Tim will eat zucchini ;)

Posted by SmartAlex at 9:18 PM