This was a good year for our apple orchard which was a rewarding outcome seeing as how we put so much work into it.  We spent two full days attacking the rose bushes.  My stepfather mowed it a couple of times afterwards.  My uncle lit the bonfires, and those piles had to be tended and worked with several times after.

The reward was that the grass and brush was kept to a minimum making it possible to gather apples.  Since the trees are so tall and the productive branches are mostly younger growth at the top, there is very little picking and a lot of picking-up.  I picked at least three bushels myself.  The Amish picked five bushels and my mother and step father picked several bushes.  There were eating apples, pies, applesauce and cider enough for everyone.  Five bushels were taken to the mill yielding an astonishing 21 gallons.  The mill told us that generally you get three gallons a bushel but ours averaged over four gallons a bushel.

We also removed several old trunks making way for new trees.  I’ve made my list for replacement trees.  The first on the list was the Yellow Transparent.  We have a nice tree in our backyard but it is within jumping distance of the woods and the squirrels take every apple before they fully ripen.  And what the squirrels don’t get, the crows and the deer eat.  By locating it in the orchard with its lower wildlife population we have a much better chance of defending a tree.  Second on the list is the Chenango Strawberry.  There is a grafted limb on one orchard tree.  My mother and her father did this decades ago with a scion from my great grandmother’s tree.  We get half a dozen apples each year and long for more.

Another obvious choice is a Red Astrachan.  Since I spent four years assuming the grafted tree in the garden was an Astrachan, and hearing such glowing reports from friends who know the variety,  I am curious to sample one.  I also would like an Esopus Spitzenburg which was the favorite apple of Thomas Jefferson.  It does well in a cold climate and keeps well.
And finally, my two favorite apples, the Golden Delicious and the Honey Crisp.  My uncle says there are or were Golden Delicious trees in the center of the orchard, but if they are still standing they are one of the trees that haven’t been producing.  The Honey Crisp is a new variety, but is popular enough that even Big Horse Creek Farms, who dedicates themselves to preserving the old varieties, carries it.

After much googling and reading I noticed a variety called King David.  This is thought to be a cross between the Jonathan and the Arkansas Black and descriptions and photos I found matched our King apple exactly.  There was even an old trade card from Stark Brothers Nursery available on eBay.  Hmmm…  I wonder if that is where these trees came from.  Certainly during that time period Stark Brothers was shipping a whole lot of trees.  There was a district office in New York.  One way to find out.  I know the orchard was planted in 1938.  I began looking for a 1938 Stark Brothers catalog and it didn’t take too long to find one.  The test would be, were all the other known varieties we had also available from Stark Brothers in 1938?  If so, it would be likely that one of their most touted trademarked varieties, the Stark King David, would be in our orchard.


The known list of apple varieties that are still here or are remembered to be here are:

When I received my 1938 salesman's plate book I anxiously opened it and went down the list.  The Stark King David had a large spread as did the Golden Delicious.  Northern Spy: check.  Double Red Delicious: check.  Cortland: check .  Yellow Transparent: check.  I searched the fine print.  Greening … Rhode Island Greening and Northwestern Greening both available...hmm.  Well, check.  Snow: sold under the name Fameuse check.  Yes, they were all there.  Bingo! 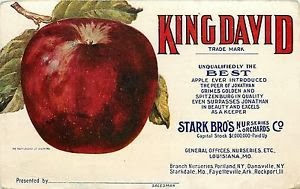 So, my conclusion is:  Great Uncle Doug ordered most or all of our trees from Stark Brothers Nursery.  One of them was our now venerate King David tree.  As I looked through the glossy color plates and enticing descriptions I wondered “Uncle Doug, why didn’t you order one of these?”  Well maybe he did.  Maybe this is the key to some of the mystery trees in the back.  Maybe they were not as hardy and resistant as the remaining varieties and are among the many blank spaces on the north side which are now going to be filled with new trees.  The orchard goes on…

Posted by SmartAlex at 7:04 PM