Five Good Reasons Not to Turn Your Soil 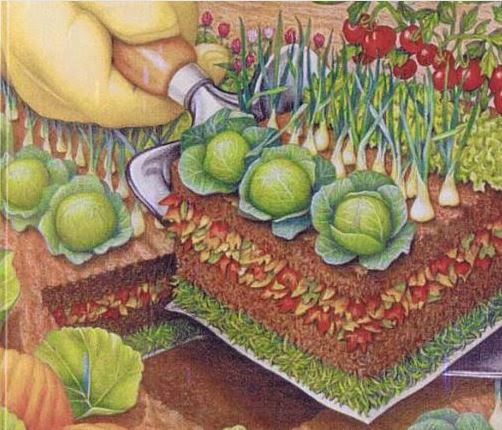 I was reading a recent blog about ways to save time in the garden, and one of the points was on not tilling or turning over you soil.
Turning and tilling the soil:
Source: Northwest Edible Life Blog

The thing I love most about raised bed gardening is not disturbing my soil.  I am a Lasagna Gardener.   I even feel bad when I have to dig a hole to place a seedling because no matter how careful I am I always end up with a couple of stunned and injured earth worms who have just had their tunnel system bombed beyond recognition.  And you can't just bury them back in the dirt and expect them to be able to dig themselves out.  I leave them on the surface in a protected spot so they can recover and find a door. Also, if you destroy the earth worm tunnels you remove the capillary system for the transfer of water to your deeper roots and increase water run off.  Not good.  When I water I never get ponding or run off.  The water disappears immediately into the soil, and I'm happy to say, down my earth worm tunnels.

I have also noticed that the less I till, the fewer weeds I have.  Sure, some come in with the compost each year, but by not turning my soil I am not bringing old seeds up to the surface where they can grow.  In the spring I just rake any non-decomposing material (usually chunks of corn cob and peanut shells) off the top of each bed and throw it back in the compost heap.  I don't even worry much about pebbles and rocks.  These chunks of material are what hold the soil together and prevent it from floating away when we get two inches of rain in an hour.

Now this one was a new one to me: Increases the rate of Nitrogen Loss.
"This is because the top 6 inches of soil contains microorganisms that break down the compost and release nitrogen, a valuable plant nutrient important for growth. Additional tilling turns over the top layer of soil, exposing the decaying compost and the beneficial organisms to air and sunlight. This releases the accumulated nitrogen in the soil and kills the beneficial microorganisms breaking down the organic matter, so more fertilizer and other nutrients must be applied."  Whoops.
Source: Negative Effects of Tilling


Well, not tilling sure saves a lot of work both in the short term and long term.
Posted by SmartAlex at 9:00 AM

Labels: Lasagna Gardening, No Till Gardening