It has been said that a weed is merely a plant whose virtues have yet to be discovered.  I'll take that a little further.  A weed is a plant that is growing where you don't want it.  Sometimes that is entirely your fault.  Today's post on Extreme Weeding falls under the Undo Redo category.

This "flower bed", and I use that term loosely, is along the drive right opposite the house.  It is a tight triangle that Tim did not want to mow (go figure).  So we put an old double blade plow in there as yard art and I began to plant.  I divided and planted Black Eyed Susans and Hosta.  I moved in Bearded Irises and Cone Flowers.  I planted Dahlias and dug the tubers up each fall to winter over.   I bought Day Lilies and accepted gifts of Myrtle, Snow On The Mountain and Daisies.


Things looked nice for several years.  I added Hardy Mums and Coral Bells.  We fenced two sides to limit the deer traffic through there,  It was colorful but a lot of work.  I had to make a map to remember what was in there and it was not easy to mulch around every little thing.  The Myrtle, which began as a chunk under the plow, spread into every empty space covering the mulch and collecting oak leaves like they were going out of style.

Over time it began to wear on me.  The Myrtle smothered and killed off the Irises and Coral Bells.  Slugs ate the Dahlias.  Deer ate the Hosta and the Black Eyed Susans.  Things fell into disrepair.  The things that weren't growing well got pulled out, relocated, given away or just dwindled and vanished.  I tried Oregano, Spearmint an Lemon Balm along the back.  The Oregano took over and the ants built a LARGE ant hill in the middle of that.


It was a challenge, but it did look nice from time to time.
My "rock clump" always made me happy. 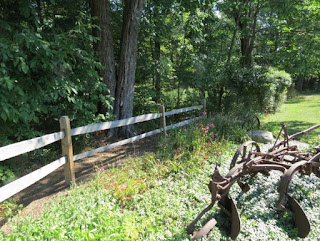 The back, along the fence, is very dry.  It gets full sun and the tree roots suck all the moisture out of the ground.  We must constantly police the edges for poison ivy coming in from the woods.  The perennial Geranium and what was left of the Cone Flowers was looking pretty bad.  The Oregano was running amok and actual weeds, as in Quack Grass and Oxalis, took up the unwanted corners.

Weeding was hopeless.  It was time for some Extreme Weeding.  I decided it was time to pull everything out of there.  I've done this before a few years ago when the Yarrow took over and looked just as bad. The Overhaul was scheduled.


This extreme weeding session involved going through with a potato fork loosening the top few inches of soil, and then everything must be yanked out and the roots must be raked up with a bow rake and shoveled away.  I was surprised how much poison ivy was in there after all, and anything in the way of poison ivy was coming out.  I removed the ant hill which was surprisingly (and thankfully) under populated.  I did leave some Oregano in the corner, and I took out more chunks of Myrtle to transplant, evening the edges and beating it back from the driveway and lawn. 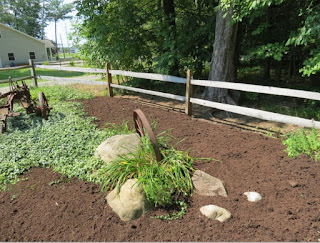 We had a little old mulch left, which was the final motivator for this project, and we laid it on thick.  I can tell when yard work has ceased to be fun.  In April we go through and carefully cut each edge.  We lay tarps on the lawn and carefully shovel yard after cubic yard out of the tractor bucket and then expertly feather it out by hand, on our knees, until our rotator cuffs are shot and our knees no longer bend.  It looks beautiful and is a great source of satisfaction. 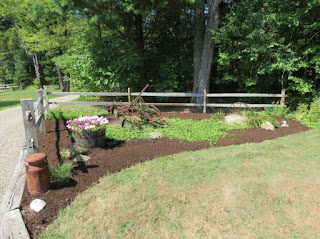 In mid-August, we ignore the edge, dump piles of mulch directly into the beds and then we shoved it around with bow rakes until it is reasonably smooth.  Yep, the fun has gone out of it.  The object it to block weeds.  We are no nonsense landscapers.  It still looks better than it did.  And maybe next year I will add some annuals around the edge to add some color. 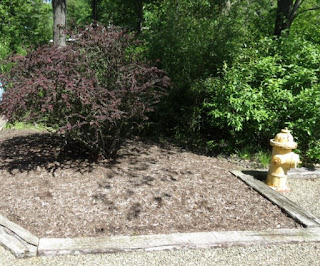 Years ago, when we UnDo-ReDo-ed the house landscape we relocated this Barberry Bush back behind the garage.  It never really took off here, and the irregular chunk out of the drive was a hassle. 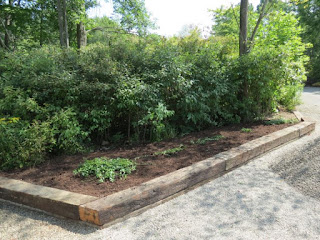 So Tim pulled that out,  The Myrtle I removed today went into this area, and the UnDo ReDo is complete.