It's Flea Market Season again!  We can go junk hunting out of doors in the sunshine!  Flea markets are a great place to gather inexpensive equipment for the garden.  I know a lot of people like to use flea market finds to decorate their gardens with repurposed furniture and windows and brightly painted junk.  Those folks have a Website and even an annual Publication.  But as I've mentioned, I don't like clutter for the sake of decorating in my garden.  So I use flea markets as a source for useful items.  I prefer these well worn antiques over shiney brite new items for a few reasons.
Take for instance, old metal watering cans.  In all my gardening life I have never gone to the hardware store (or WalMart) and bought a new plastic watering can.  There are still some very well made metal watering cans out there but they are pricey.  I like the vintage galvanized look and I can usually find them for about $15-20.  I have half a dozen and I have them scattered all over.  I hate being on my way to work or dinner and seeing a pot that needs water rescue and having to put it off until I get back.  If I remember.  Having a full watering can nearby lets me rescue the plant and still be on time.  The last thing I do in the evening gardening routine is refill all the cans and place them back at their posts.


Old kitchen items are easy to find and cheap.  Measuring cups, funnels, scoops, scales.... they all have their place in my garden shed.  Measuring cups are useful for measuring soil amendments or solutions.  I put soapy water in mine and flick bad bugs into it.  I have a large, "Hoosier" style range shaker of salt for melting slugs.  If you needs to dust your plants with a powder, an old fashioned flour sifter works well.  Scoops are necessary for soil bins or spreading fertilizer or oyster shells and feed scoops are fairly easy to find.

I collect cream and green granite ware.  And one thing I like about my collection is that there are a lot of useful pieces in it.  Preserving kettles, with their wire bale handles, make great weed pans.  They hold up to the weather and they are attractive. More so anyway than a plastic trug and they sure won't blow away.  Again, I have them placed strategically around the property.  It's nice to pull a weed and have a place nearby to drop it until I can take the time to haul a batch of them off for proper disposal.


Large grain sifters make short work of sifting compost.  I use mine to scoop right out of the pile and the shake it out over the wheel barrow and toss the larger pieces right back into the pile.  I have a smaller (modern) metal one that hangs on the side of the compost bin all summer, but for larger projects, the old grain sifter works much better in volume. 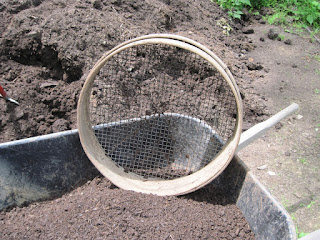 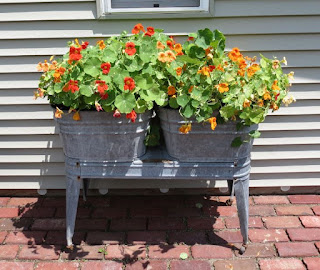 One thing you can find in abundance at flea markets or auctions are unique planters.  Wash tubs, pails, crates, chicken feeders.  A friend of ours has a greenhouse and she will plant flowers in just about anything.  One of her cutest planter ideas was a pair of children's boots.  Old chairs missing cane seats or wheel barrows are great for adding height or getting planters up and off a surface that you don't want to discolor with a dirty pot or constant dampness. You can buy reproduction wash tubs but Tim found my first set at an estate auction for $7 and the other was at an antique mall for less than $25.  Besides being planters, I leave one tub open to use as a sink for rinsing vegetables. 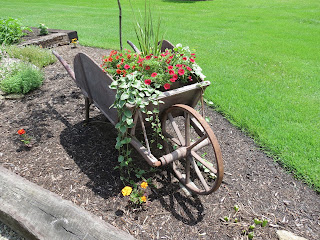 Now about those old marshmallows...remember when I bought the old five pound Campfire Marshmallow tin at the local auction? I used it as the base of a winter centerpiece and now I've sort of begun to collect them.  I really like old advertising tins, but I've never really succumbed to collecting them until now.  There are plenty of brands of marshmallow tins out there but there is something about the red and white Campfire tin that I just love.  I picked up a second one last summer and then this weekend at the Automotive Flea Market:

It was a beautiful sunny day to spend at the big annual Automotive Flea Market.  I was specifically looking for a 1940-50s radiator filler water can.  You see I have those large pots with the "self watering" reservoir that has to be filled by a 2 inch spout.  Regular watering cans with sprinkler heads are about useless for that even with the sprinkler off, and I don't necessarily want to keep the pots within reach of the hose, so the goose neck of those old radiator fillers is just the ticket.

"Believe it or not thirty five dollars.  My wife doesn't want me to sell it."
Well, I guess not.  Even he sounded a bit skeptical about the price. I put it down and continued on my way, but I was stewing.  I had no intention of leaving that flea market without that can.  But 9:30 am on the first day of a flea market is not the best time for dickering.  Junk Men are holding out for a better price and hassling them early in the morning just makes them more stubborn and convinced they have a desirable item.  They don't get desperate for cash until after lunch with the prospect of packing up all the junk and taking it back home.  Since I'd never seen that size before I knew it was relatively rare and therefore, worth a little more than the common size in comparable condition.  But this was not exactly a retail situation.

Hours passed and we covered the miles.  I had been back by his stall hauling junk back to the truck so I knew it was still there.  All the time my approach was rolling over in the back of my mind.  Later in the afternoon, emboldened by a trip to the beer tent and other successful negotiations, I made my approach.

I knew how much I would pay ($25) and where I needed to start to get there.  You always have to start lower and do the math so when you and your opponent meet in the middle you will be at the price you want.  Every Junk Man has wiggle room on more valuable items and they expect to negotiate.  That's what flea markets are about,  I had my first offer in my right pocket, and my dickering money in my left pocket.  One rule of dickering is have your cash in exact change.  Never peel your smaller bills out of a roll of large bills.  That only insults - and causes cash regret - in your dickering opponent.

I swept up to the stall, scooped up my can and faced the junk man.  I just held it up and wiggled it a bit.
"Thirty five"  I could already tell he was on the defensive and back on his heels.
"Twenty.  I know your wife doesn't want you to sell it, but you brought it here to sell anyway."  I raised my eyebrows. "Didn't you?"
"OK Thirty".  I could see him squirm a bit uncomfortably and absolutely believed he was under orders regarding the dirty little ole tin can that he would happily part with if not for.....
"How many women do you think are walking around here wanting to buy an eighty year old empty marshmallow can?" I asked  "I'm your gal.  Twenty Five"
"You'd be surprised.... tell you what...."  He took the can from me and turned around.  Now I was in for a surprise.  He opened the side door of the old blue Chevy van that made up the back wall of his booth and stuck his head and the can inside.  I could see in the gloom, a figure slumped in an old aluminum folding chair.  Who in their right mind spends a lovely day like that shut in an old van?  The Junk Man himself was missing his top four front teeth so if he was keeping her hidden away she must be a real beaut.  I had not believed that he had plucked this can, with the oily dirty lid that was beginning to grow fur, off of his wife's treasure shelf right up until that point.  Now I did.
"Twenty Five for this?" he held the can out towards the gloomy slump.  A full ten second count elapsed before the slump uttered  "Yerrrsss."  The Junk Man and I exhaled.  She was willing to part with it,

I handed over my cash and claimed my prize.  The Junk Man, freed from the constraints and marital pressure of the pricey marshmallow tin, relaxed and smiled a toothless smile,   A successful day.  I got what I came for and found a rare treasure.  Now that I have three marshmallow tins it is officially a collection.  And therefore I must get more.  ... and ads for them, and the recipe booklet.  I will become a Campfire Marshmallow exs-purt. There are worse vices. 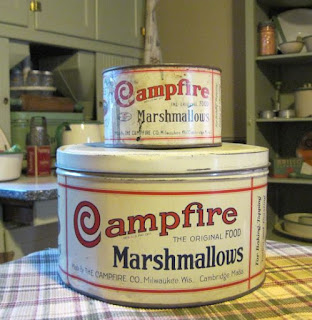 Posted by SmartAlex at 6:21 PM