There is something about a soaking rain that brings out the turkeys.  It seems like whenever we have a stretch of rainy weather I find a soggy turkey slouched miserably in the yard trying to air out.  Not a year goes by without us seeing a few turkeys, but they aren't as common since the coyotes moved in down the road.  Today we saw a whole flock of soggy but happy turkeys.  In fact, they were having themselves a little turkey party. 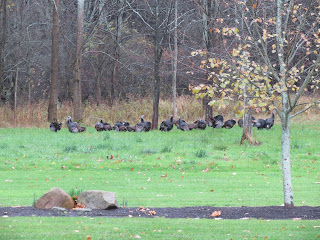 It started with a lot of airing out and preening and ended in a hoe-down.  They were dosey-doeing and promenading and popping up in the air like popcorn.  We tried to count them and came up with at least twenty.


Besides the turkey party, our two squirrels, one back and one grey were darting in and out, and a couple of cautious deer lurked in the edge of the woods.  The deer aren't as bold as they usually are.  We promised a friend of ours who bow hunts that if he just sat in the glider rocker on the garden patio, the deer would come to him, and that's exactly what happened.  I've been joking that when we opened her up she was full of Hosta.  And that's not far from the truth.  So we're down one large doe, and hoping to get rid of the medium sized doe as well. 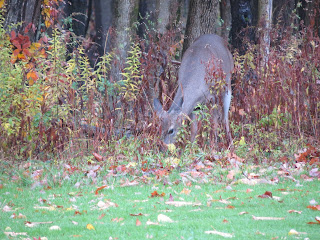 In fact, here she is.  That's right! You'd better watch your back. 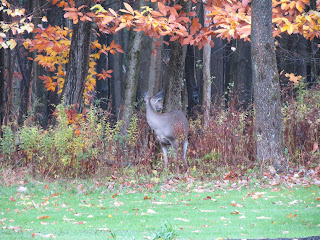 Posted by SmartAlex at 2:30 PM

Labels: Weather, When we're not gardening