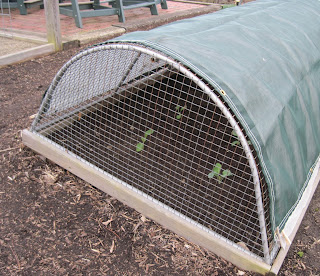 The Cauliflower and Broccoli had been out for an hour or so a day for several days. The next step would be to put them out in the cold frame under the 50% shade cloth.  Or... I could just plant them in the ground under the shade cloth.  So that's what I did. 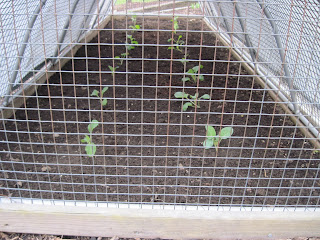 A row cover and a shade cloth.  They are doing well.
They had been seeded five weeks earlier so it was time.  Everything I've read about them says they get transplant shock and don't wait more than five weeks to put them out.  So out they went. 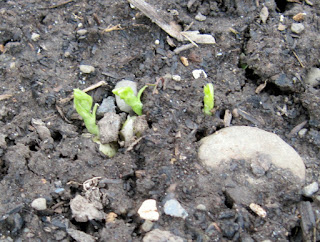 I also have teeny tiny baby pea plants
Two and a half weeks after being seeded.  Right on schedule.
This weekend I will put in the second half.

The tomato seedlings and eggplant seedlings have been put into pots.  They won't do much for about a week, but then I expect them to take off.   I don't want them to get too leggy anyway.
Posted by SmartAlex at 7:34 PM