I have reached the point in the season of wondering
"what are we going to do with all this food?"
Of course I would rather eat it all fresh, but that just isn't possible.  Some of it has to be put away.  In the mean time, both the house refrigerator and the one in the garden shed are chock full of broccoli, cauliflowers, cabbages and cucumbers.  Baskets of summer squash clutter the counter, and a basket of new potatoes is tucked into a dark nook. 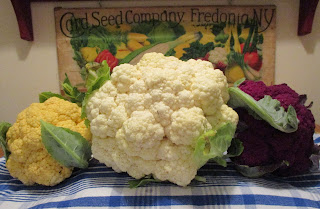 I think I fulfilled my goal of growing a giant cauliflower.  I only had two white plants survive the nasty spring weather and the first of those has produced.  The second has a small head.
The Graffiti cauliflower has been the most fun.  I enjoyed taking people into my garden and saying "come look at this..." 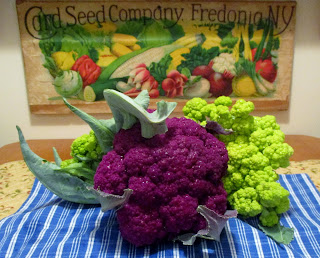 I put the cauliflower in the steamer for 10 minutes and it held its color.
The leftover water was a deep mallard green.  When you cook purple beans you get water that is lime jell-o green.  This was a deeper color.  Of course you don't want all of your color and nutrients bleaching out, so go gently on the cooking.  It made a nice contrast with the green Vitaverde.
The orange Flame Star takes priority for raw snacks.  The white head will go into the freezer. 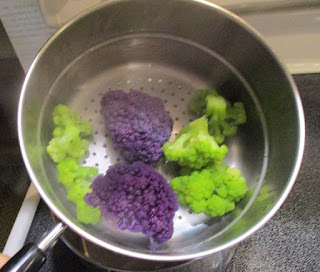 Now that I am past the broccoli salad rush, I am on to cole slaw.  The purple Red Acre cabbages are taking a little longer than the Golden Acre, so I am picking them smaller and getting a nice ratio of green to red in my slaw.  I am also pulling Nantes carrots, but they are not pictured because I pull them when I have the slaw half made so they will not lose their crunch.  I started with a traditional recipe, but I'm now using the Dinosaur BBQ recipe which replaces white vinegar and white sugar with cider vinegar and brown sugar.  We ate there once and I really loved their slaw.

I always pick my zucchini really small because it is just me eating them.  But right now I am loving the round Cue Ball.  They are sweet and tender and should be picked when they are still the size of a cue ball.  They scratch up really easy.  I don't know how anyone would ever take these to market. The ugly factor would make them unappealing. But I've learned to be extra careful and always use a knife to cut the stem.  I am now picking both Supremo pickling cukes and Bristol slicing cukes.  I don't have enough Supremo to make a batch of pickles yet so they are going into salads for now. 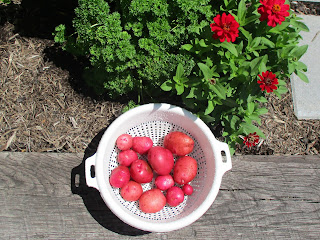 I've pulled the last of the weed potato volunteers out of the zucchini bed.
My grow-bag potatoes will be ready to harvest as new potatoes soon. 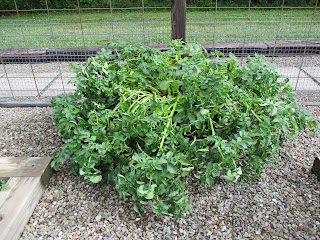 The largest of the bunches flopped in the rain.  The only problem with this is it leaves the center surface of the soil exposed to more direct light.  If I had a lot of soil or chopped leaves lying around (which I don't) I would have just dumped some in on top.  But instead I took some twine and tied a circle around them.  Then I went and tied twine around all of the others too!  If I can get to mixing some more soil (I have all of the ingredients) I will probably untie them and add a layer.  It will actually make watering them easier and they don't really look messy.  They look like a giant planter full of cascading plants. 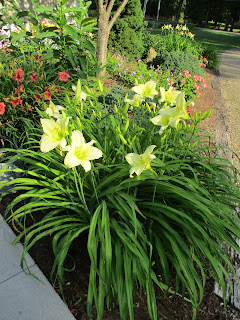 This is day lily season.
Here are two of my favorites 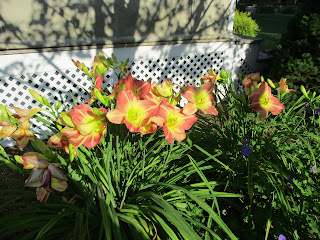 Posted by SmartAlex at 8:31 AM