Goodbye to the Lettuce 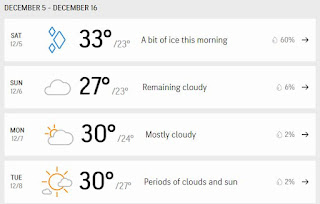 I have to keep reminding myself that this is December and the fact that my lettuce has survived this long is not typical.  I often lose it to frost in November.  It is hard to mark time in 2020 when nothing is as it should be.  I've been keeping an eye on the forecast because the GardenQuilt  that I have used to cover the lettuce with is only effective down to 24 degrees.  Wednesday morning the house thermometer read 23 degrees in the morning, but there was also a thick, insulating layer of snow to seal the frost cover. 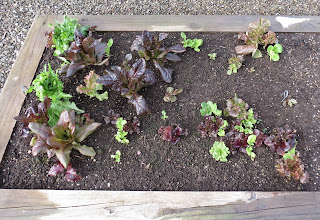 And the lettuce survived.  But my good luck isn't going to last and I didn't want to chance losing it entirely.  This morning was 40 degrees and sunny but I knew that snow and cloud cover was on its way.  The potted parsley I brought into my office is thriving and putting out a lot of new growth and that gave me the idea to try to save the little lettuce plants that were direct seeded in mid-September.  They've been sluggish but are nice little plants and worth saving if possible. 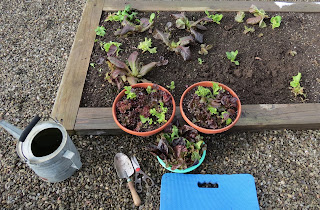 I prepared some shallow planters and transplanted the best of them.  I concentrated on the darker varieties because I can add those to iceberg lettuce and make a nice salad.  I also went ahead and cut all of the mature lettuce to bring in the house, and then uprooted and composted whatever was left.  I hung the frost cover out to dry in the sun, and with that the garden is done for the year. 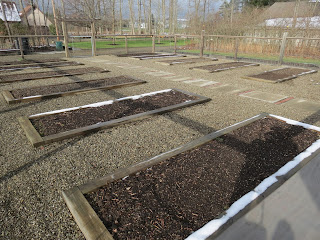 Posted by SmartAlex at 3:23 PM