Almost all of my Rosemary cuttings survived and are putting out new upward growth.
The Sage - well lets just say half of them are not dead yet.
One of the two parent Rosemary plants is putting out a lot of side shoots, and the other stockier plant has instead put out 2 inches of upward growth per stem, much like the cuttings.

The lettuce transplants are a success.  This week they have taken root and begun to grow.  The other two plants are curly parsley which was down to about 6 fresh stems per pot when I brought it in.  These parsley plants are what gave me the idea to transplant the lettuce.
When I got to work yesterday morning they were standing up straight and looking energetic. 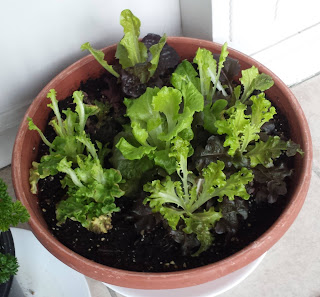 As a footnote to the December lettuce.  I had a two quart container chock full of lettuce that I cut on the 5th and brought in to the office.  My office fridge is a little schizo and will sometimes freeze things like milk or fruit.  The next morning all of that nice lettuce was crispy and covered with ice crystals.  I was so put out I almost threw the whole batch.  Instead I set it out on the counter and in about an hour it was unfrozen and looking as fresh as when it was cut.  The rest of the week I kept it in the trunk of my car where it would be cool but not frozen, and you would never guess it had been on the brink of destruction.  Lettuce is more cold hardy than I thought.
Posted by SmartAlex at 10:54 AM