The Chilly Pear Tree - The Sequel

It was this time last year when I had just planted my four in one pear tree and the polar vortex dipped down and chilled us all to the bone.  All of the (well, most - not the old timers) gardeners on my local garden Facebook page were frantic about the forecasted snow yesterday.  Especially the ones who had planted tomatoes.  Rookie mistake.  Yeah I know it was 80 degrees the other day.  But its also April.  In New York.  We had been enjoying 50 degree weather and some sun.  I have gotten a good start cleaning and weeding the landscape beds in preparation for mulch.

Of course the pear tree had begun to leaf out this past week in the mild temperatures.  It was showing some nice buds and I really want to give it a chance to do well so I got out the bean poles and frost blanket again.  Deja vu. 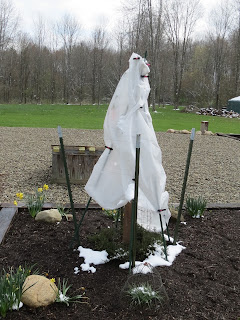 We could have gotten up to 6 inches of snow today.  But luckily the temperatures are hovering in the low 30s and we aren't dealing with high winds this time.  I gathered up everything I had in pots (pansies, transplanted perennials etc) and tucked them into either the cold frame or under a frost blanket I threw over the cabbages when I planted them 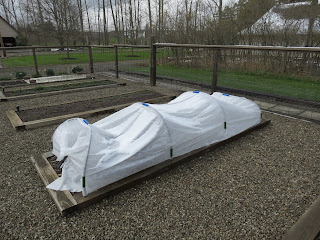 It was a rather slushy snow which weighed the covers down.  And at one point we did have a good inch of accumulation everywhere but - I didn't go outside then.... 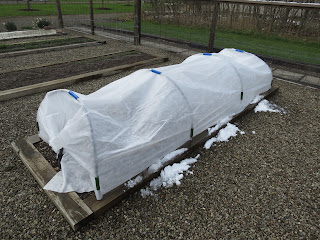 I went out and shook everything off and coaxed it back into shape. 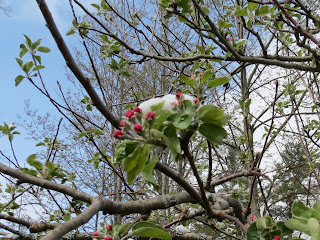 The apple trees are showing buds but will be OK
unless the temperatures take a real dive.
The pear tree was in the same stage of bud, silly thing. 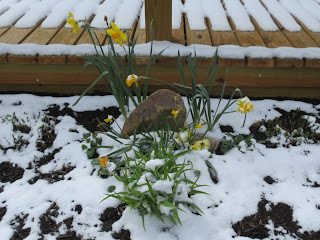 I think even the daffodils will still look nice.  These I planted last fall in the new bed in front of the deck.  I considered picking them to enjoy before the snow ruined them but I think there will still be some nice flowers left after this is over.  I have hundreds of daffys blooming all over and they were so beautiful this week.

Posted by SmartAlex at 4:46 PM