Since I don't have a greenhouse yet I make great use of my Cold Frame that  was built 10 years ago.  I use it to start seedlings a few weeks early, harden off all of my seedlings and store greenhouse purchases until weather permits planting.

It was quite pretty in it's youth.  The lids were picture framed with mortise and tenon corners.  The panels, salvaged from a friend's commercial greenhouse, were set into grooves.  All these details made the lids attractive, but also created some problems.  The panels were recessed below the wooden surface which made a great place for ice to collect in the winter.  The weight of snow could bend the panels enough for them to pop out of their grooves.  Water accumulated along the lower edge and any moisture or dirt that got into the channels of the panels, from either end, was trapped there forever.

Last year the corners of the lids gave out.  My husband really wanted to throw the whole thing on the burn pile and I don't blame him for that.  It was definitely past it's useful life span.  But instead he reinforced the corners so it would survive the winter and then this spring he offered to make repairs.
We could have used the remaining salvaged panels and rebuilt the lids exactly the same.  But the remaining panels weren't in much better condition.  As the polycarbonate ages it discolors and becomes brittle.  The old panels were no longer surviving hail storms and were beginning to look as if someone had shot them with a pellet gun.  Last spring when the weather was so cold they did not let in enough light to raise the temperature much.  So it was time for a little redesign.
Voila'. I give you - the Cold Frame Mark II 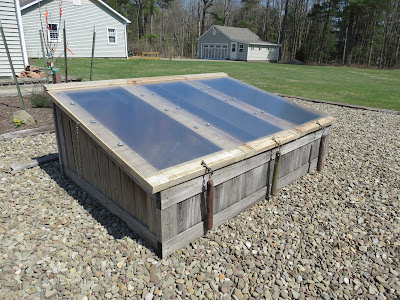 Greenhousemegastore.com sells reasonably priced 2 foot by 4 foot twinwalled polycarbonte panels in packages of 5 with free shipping.  And they also offer a 10% discount to listeners of the Joe Gardener podcasts. These panels are perfect for a do it yourself cold frame project.  They come in either 6mm or 8mm and I ordered the 8mm.  My husband was really excited to hear that their size (while convenient to ship) meant the lid would have to be built in three pieces instead of two - but not excited in a good way. 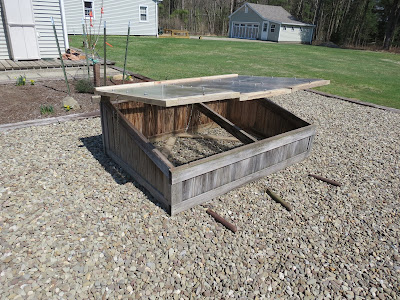 Has anyone recently checked on the price of a 2x4?  Anything that gets built around here this year is going to need to be made of salvaged material.  We had some lightweight 1x material left over when we replaced the deck, but not enough to make three lids.  This meant they had to be built out of 2x4 scraps.  Which therefore means they are heavier and super stiff.  The large lightweight lids had a tendency to become sails in any sort of a wind.  If you were lucky this meant they could slam closed.  If you weren't lucky it meant they would wrench off a hinge.  We use old window weights to keep the lids weighted closed, and chains to keep them from resting the weight on the hinges. 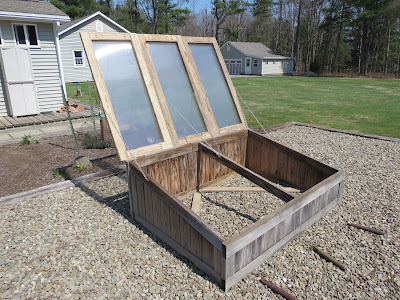 I'd like to point out two significant changes to the lid design in case someday you want to build something like this yourself.  The panels are attached to the face of the 2x4 frame with special padded washers designed for twinwall polycarbonate.  You can find an example here.  You first drill a slightly larger hole and then secure the fastener.  The fastener allows for expansion and contraction.  Our friends actually included some of these when they gave us the salvaged panels and my husband even knew where he had put them all those years ago. 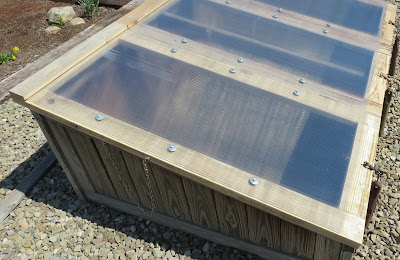 Because the panels are secured to the face of the frame, the bottom edge is open to allow any moisture trapped in the panel to run out.  Also, there is a piece of wood with a rabbet cut along the edge to overlap the top edge and prevent water from entering in the first place.
So now I am in business for spring planting.  The cold frame, while its base is weathered and warped, is sturdy and functional and looks clean and respectable.  A lot more sunlight is making its way in.  I have a thermometer in it so I can get a feel for its temperature swings with the new panels.  I have moved several potted herbs from my office window to the frame, and I am preparing flats so I can seed some annual flowers and lettuce.

Posted by SmartAlex at 1:39 PM